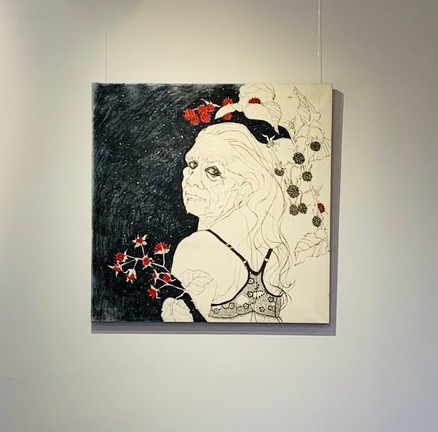 In art, literature and cinema the portrayal of men have always been to formulate notions of masculinity; whether the male protagonist is dra

Private Mythologies
Encounters with Past, Painting and Pleasure
Iqbal Geoffrey

In art, literature and cinema the portrayal of men have always been to formulate notions of masculinity; whether the male protagonist is drawn to be at the centre of the storyline or symbolic of idealistic moralities, the male representation is often pretty unrealistic. When we think of fictional characters like Tarzan and Superman who’s stories have been adapted endlessly, their purpose is to be a unifying entity between otherworldly creatures and human civilisation – he can talk to animals and aliens but he is still dignified, genteel and above all, cannot be physically outdone on the battlefield.

The prophets of major religions are as well – not a coincidence – men and that too, men who posses incredible supernatural powers that have changed the course of history. The stories of prophets have left a permanent impression with civilisation after civilisation, conjuring the intangible image of the pious larger than life man who is the connecting body, delivering the message from higher authority. We are consequently, always left questioning, who is the perfect man and what does the perfect man in the twenty-first century supposed to represent?

These questions are addressed in various ways  in five artists works as part of the exhibition titled ‘The Perfect Gentlemen’ at the Rossi & Rossi gallery in London curated by Zahra Khan as part of Project Art Divvy, an initiative aimed at showcasing contemporary Pakistani artists. It is impossible to avoid the topic of masculinity when you live in an intensely patriarchal society such as Pakistan’s. The artists have responded to the ever present male body found within their research even if it is not so apparent at times. While speaking to curator Zahra Khan, she outlines that upon looking at participating artist Maria Khan’s work at first glance, the compositions of women wearing lingerie speckled with blossoming red flowers and fruit, is very sumptuous on the surface. The way the women glance back at the viewer over their shoulder with hair swept to one side leaves us to  ponder of the relationship between the artist and the muse. Upon closer inspection we see sharp masculine features emerging through the faces with sullen skin and wrinkles – the people in Maria Khan’s work are definitely not the epitome of youthful feminine beauty but this again makes us question what defines our visuals of beauty? We somehow accept androgynous bodies in the fashion and beauty world but aged corporeality doesn’t make the cut.

The body takes focus in Zulfikar Ali Bhutto’s work as well with his collective research on wrestling, body building and superstar male heroes such as Rambo. The work for ‘The Perfect Gentlemen’ is part of a larger body, ‘Tomorrow We Inherit the Earth’ comprising of both textiles and performance pieces. The piece spells out ‘Guerilla Jang kay Hathyar’ in Urdu which looks at the cultural touchstones that help carve certain ideas of gender through the generations. Archives such as story books and instruction books which simplify complex historical narratives can be interpreted as social history and Bhutto uses these materials selecting Urdu texts and stories to create a trajectory of narratives that create a futurist alter-universe of a queer revolution. Additionally, the artist’s use of fabric and choice of prints, textiles and borders gives a glimpse of clothes South Asian women wear; however the central image amongst all the fabric is of two men wrestling in black and white alongside the Urdu text. This hyper imaginative story of men tussling through patterns we see in dupattas and shalwar kameezes dissolves the preconceived visual of the Spartan male warrior. The paradoxical materials to the content could be seen as a way of ‘beautifying and feminizing’ these athletes but the specific position of the men wrestling is much more sexual and passionate than burly and furious.

Subverting images and rendering them in unexpected ways keeps the viewer intrigued and guessing. Sophia Balagamwala uses this technique while painting portraits of military men and generals by caricatures that could pass off as cartoons from children’s’ bedtime story books. Simple shaky lines of outlines animating pious eye movement and funny upturned noses add a hint of ridiculousness to the generals. The silliness is topped off with exaggerated moustaches and illustrated backgrounds like jungles and a tech-control room. Balagamwala’s paintings make us think of men who think they can conquer the world with their ability to grow thick facial hair and their shiny medals of honour which verify their existence on planet earth. By titling the paintings ‘Golden Opportunist’ and ‘Jungle Dreams’ it is easy to draw the connecting of foreign invaders imbedding their mistakes forever in the history of the land. Hints such as these allow us to imagine the beast within each man and the legacy of men colonising people and property since the beginning of time.

The feeling of gold and victory is present in Saud Baloch’s work as well with cracked golden urns revealing disturbing miniature images of tortured male bodies at the bottom of the utensils. One has to peer down to look into the golden bowls to make sense of the minuscule photographs. The gleaming utensils remind the viewers of the waged havoc created by the mining of gold, oil and other natural resources. Some images of the tortured bodies look extremely similar to the prisoners of Guantanamo Bay. Indeed it is quite obvious that the images represent the cruelty and injustice behind each conquest but there is also something very fake about the golden utensils which reads as the transparency of the riches and the wealth accumulated by conquerers. One can think of episodes in history such as how a large part of the British Industrial Revolution was funded by the gold mined in Brazil by the Portuguese who in return owed a huge debt to the British Government. The other half of the funding came of course from one sided trade with the colonies.The works are titled ‘Inflict’ as a series of comments on the destruction behind the glitz and glamour. Since the exhibition is centred around the male body it is interesting to note that like Balagamwala’s work it focuses on men destroying other generations of men in a cyclical world.

Abdullah Qureshi’s work contrastingly, focuses more on the intimacy of men and finding comfort and trust with each other. Qureshi has painted poignant portraits of faceless men who have spent time with him in his studio discussing queer culture and their own personal experiences of intimacy and the struggles they have had to encounter in Pakistan. Although the country seems to take a stance against supporting lesbian gay and bisexual citizens, the sheer amount of portraits Qureshi has painted over his career makes the viewers think about how many men do not have the means to come out or how many men have been subjected to sexual violence. Noting that these exchanges and portraits happen in the artist’s studio we are reminded of the sanctuary art and the art studio can be for those who can never live an antiseptic life, immune to the sharp gender roles  defined for us. Perhaps it is even the wonderful looseness of the watercolours and inks which lend to the ambiguous details of the men leaving them unidentifiable.

This exhibition is Art Divvy’s third collaboration with Rossi & Rossi bringing together Pakistani artists who are able to reach new audiences through their work. It is easy to see how a carefully curated exhibition bringing together artists with a common thread can give viewers so much to think about in terms of Pakistani culture and its’ relationship with contemporary art. ‘The Perfect Gentlemen’ focuses on masculinity but it also speaks about popular culture, history, the definition of gender and the impact of colonisation. Exhibitions such as these are projects which reflect the dedication from the curators to support emerging art, providing more opportunities and clearing the pathway for further collaborations which is always needed.