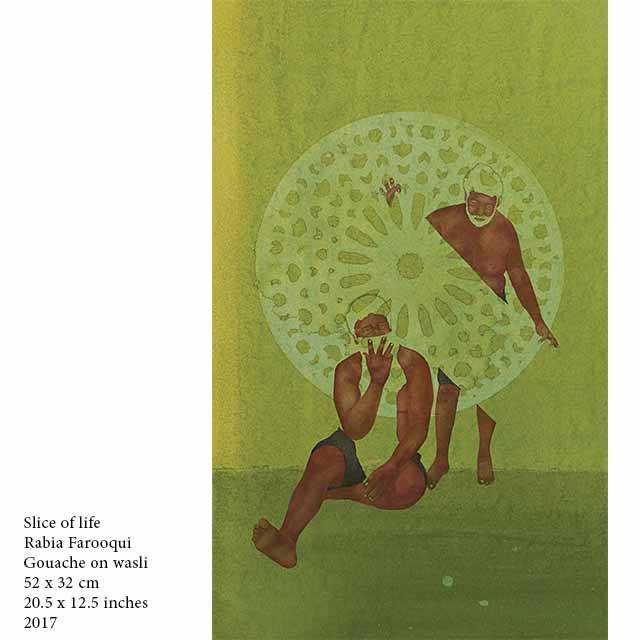 Against intensely colored, jewel bright tones, old, grizzled men serenade each other with musical instruments, indulge in battle, drape themselves in cloth and ponder over the wondrous discovery of a concealed chicken. There are a multitude of actions; responses in harmony or in conflict. At closer glance, it is discovered that the other character, the one responsible for inspiring these excitable, impulsive reactions, is actually the same person.

This enigmatic being engages in a sequence of comical, strange and spontaneous efforts with a supposed version of himself. Like props in a theatrical production, there are odd, yet significant objects scattered in the scenes. Held at Sanat Gallery, ‘Clap Clap, I Approve!’, is a solo show by artist Rabia Farooqui, a graduate of the Indus Valley School of Art and Architecture. Farooqui explores personal and sociocultural narratives through a series of dramatic gestures and peculiar movements, finely rendered in miniature.

Our actions shift, flutter and refashion themselves as they come into conflict with societal norms, values and traditions, as well as other people. As we are policed into self adjustment, we may engage in subconscious quarrels with our yearnings. The figures wrestle, frolic and tumble together in a dreamlike lull, where no single protagonist exists. A seemingly singular identity fractures into a multitude of autonomous beings. The artist highlights a discord between welcome propriety and desire; a sense of conflict and undertones of violence pulsating beneath the trancelike occurrences.
In ‘Shh, it’s a Pussycat!’, the figure, clumsily reaches to stroke a cat, only for a pair of hands to admonish him. Perhaps public displays of affection are unwelcome in a heavily conservative society? Similarly, in ‘Wow but How?’, the figure unwillingly trudges on a treadmill, engaged in a generally approved action of exercise, only for a languishing figure on the floor calling out to him, perhaps inviting him to engage in a delightful slumber. The other figures may perhaps be manifestations of both conflicted ideas and wishful thinking.

The vivid patterns in the background offer a delightful musicality to the work, a sense of harmonious, synchronized movement. The embellished patterns are deceptive in a way, camouflaging the essence of order and symmetry with an ethereal romance, hammering in the idea that there is pleasure in conformity and structure. It seems as if the characters are sleepwalking through a landscape of emotion, leading controlled, clockwork lives with a despairing helplessness, fooled by the superficial decoration of their surroundings.

This helplessness may be further reiterated through the presence of an omniscient narrator in the work. Dignified, awe-inspiring hands enter the composition; their owner concealed, pressing buttons, offering applause and beckoning reprovingly, seemingly controlling the action below. The power they possess is similar to that of religion and the government as they release warnings, clues and blessings amongst the blundering beings below.

The anatomical fragmentation in the work reduces the figures to their gestures and therefore, their messages are brought under the spotlight. Gestures offer a wealth of sincere information, rendering the rest of the body parts largely unimportant. This emphasizes the flow of communication in the work and that, whether obscured or exhibited, communication is an integral part of the visual experiences captured by the artist.

Farooqui metaphorizes human experiences in an exaggerated, humorous manner. The delicate miniature technique in the work adds a layer of fragility to the well rounded, swollen bodies. The playful narratives are full of riddles and witty contradictions. However, they form a rather tragic comedy, as they bring to light the fact that true freedom is almost unattainable.