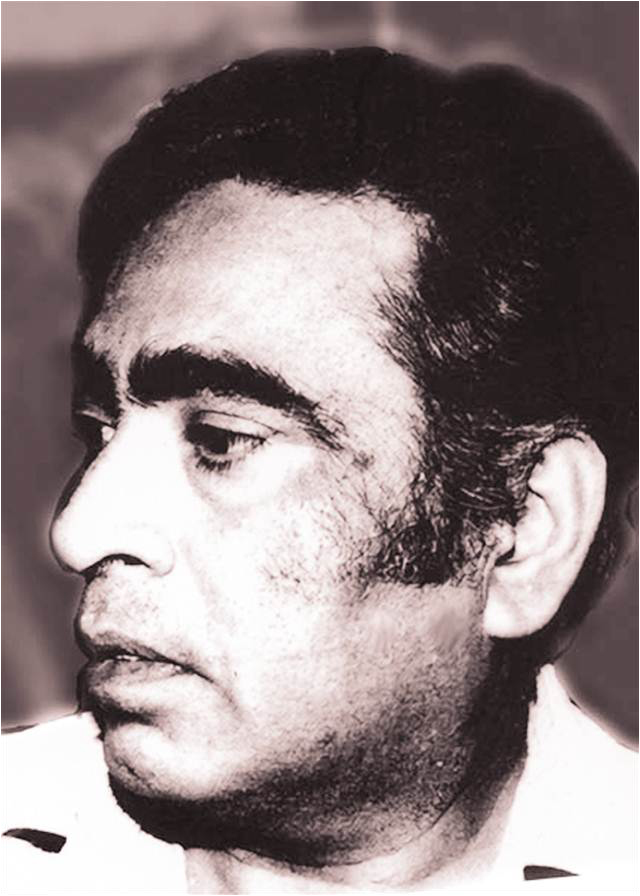 A R Nagori: A Retrospective

Writing a retrospective about someone whom you have never met is quite challenging at one point yet quite enkindling at another. while conce

An ‘artwork’ on Imran Mir’s Papers
Memoirs of Art in Pakistan – The life of Marjorie Husain
Jamil Naqsh: Art is a Way of Life

Writing a retrospective about someone whom you have never met is quite challenging at one point yet quite enkindling at another. while concerning available reference and resource material one does a lot of guesswork to reimagine the lifetime the deceased person had been through making meaningful connections. And if that deceased person turns out to be a creative soul, the search journey becomes more exhilarating. Born in 1938, A R Nagori left us on January 14th, 2011 at the age of 70. I personally never have had a chance to see him. When I was asked to do a piece of retrospective on him, my brain did a quick data check, like a computer, of artists profiles I studied as a part of my history course on pioneers of Pakistani art. What I recalled was an assertive face with pensive features. Later while going through a book written by her daughter Amber Romasa on his life and works I could not remain unimpressed by the ingenuity of his face and the intensity of his soul. That ingenuity and intensity was expressed persistently throughout his life, works and words.

With significant paternal and maternal background, Nagori gets the best of both worlds. His mother was raised by a well-known scholar-poet Ahmed Mian Kazi Akhtar, Sindh University pioneer professor whereas his father being a hajji and a strong humanist helped him immersed in the air of multi religious festivity. In his childhood, Nagori attended an array of cultural, religious and social events in his neighbourhood. While learning Quran at a madrassah, and English by a retired Hindu magistrate his mind from an early age was engaged in an intellectual and philosophical discourse questioning the norms. Through his works and words, he would have had the audacity to challenge artists and politicians about failing social and economic conditions of his country.

His fate, to cross paths with an array of high ranked artists and intellectuals of all times, brings him to Lahore in early 60’s where he would study under eminent art educationists and artists like Anna Molka, Khalid Iqbal and would spent time in the company of Nasim Hafeez Qazi, Colin David, Shakir Ali, Shemza, Murtaza Bashir, Safdar Mir, Sufi Tabbassum, Faiz Ahmed Faiz, Dr Niaz Ahmed, Moen Najmi and the list is long. He himself recalls the 60’s Lahore as Mecca of art and the golden period of his life.

An artist, an art educationist, a writer and an activist, A R Nagori’s life seems to be full of adventures. His list of service is not only long but has many flavours. After completing master’s in fine arts from University of the Punjab in 1965 Nagori joined his alma mater as a Lecturer where he served for a year leaving for Kohat as a head of Fine Arts Department of Cadet College. But his energy would not let him stay on one place as he was a man of great vision. Working for Air Force as an education officer till 1970 he became the founder head of University of Sindh, Jamshoro.

Being a member of significant organisations and serving various departments, Prof. Nagori had one cause common and that was to bring change for the sake of betterment whether it’s the education system or the circle of arts and culture. 70’s and 80’s while working with various private and official educational bodies Prof. Nagori did several reforms in art education for which he deeply felt even in his writings. Taking numerous initiatives in curriculum committies, teachers training programs and development strategies Sindh sector witnessed visible progress.

His sojourn first in Sindh then at Lahore and then back to Sindh intensified his journey in all respects. The depth of his soul is not simply a result of his rich family background but his urge to meet people of intellect and thought.

A R Nagori belongs to that generation who has witnessed not only the golden period of art in Pakistan but had also lived through the tumultuous times of 70’s and 80’s. During that period all sorts of artistic activity and freedom of expression was curbed to which Nagori always rebelled. He had also been associated with journalists and lawyers for their move for justice.

Nagori’s worked several themes. The work dealing in Hindu mythology probably has its roots in his company of Hindu pandits and sadhus his father would leave him in his childhood. His father’s job in the forest department had helped him building a strong connection with nature. Dynamically constructed and violently charged with vibrant palette, his canvases owe a lot to his early exposure to nature.

If A R Chughtai due to his interest in tradition is known to be a man of past, A R Nagori for his choice of form and content surely is a man of future. The predictions made through his paintings turn out to be true decades later. With an enthusiasm of a child he would paint his canvases to protest the social injustice. His colourful palette was criticised for not being in-synced with his themes to which he responded in a manner of utmost decency that the work without aesthetics is pointless. With a mind of conscientious nature, he warned the society about the social injustice, economic disparity and political failings as said by Marjorie. His courage to speak the truth is evident throughout his artistic oeuvre.

By his friends, colleagues, students and followers he is repeatedly mentioned as an activist and a free-spirited person. Protest was in his blood. During study period at Punjab University he would even react to the institutional rules of painting in cross hatched manner and would break through that style by using vertical strokes. He was recalled being ‘vocal in his excoriation of repressive governments and injustices’ with his blatant imagery. (Nafisa Rizvi The Friday Times).

Being a pioneer in having anti militarian exhibition, he is courageous and undismayed in the face of odds. His King series exposed the establishment agendas. Mark Fineman author of Crisis on the Road to Democracy wrote in Los Angeles Times “…PERHAPS NOWHERE WERE THOSE TROUBLES PLACED IN SHARPER FOCUS THAN IN THE INDUS GALLERY IN KARACHI WHERE AN EXHIBIT BY ARTIST A. R. NAGORI SOUGHT TO DOCUMENT ZIA’S LEGACY IN SERIES OF ANGRY PAINTINGS…” (NOVEMBER 27, 1988)

He did enjoy the status of an artist by having constantly being absorbed in the process of making and sharing art locally and in the outside world. Having Solo exhibitions from 1958 till the later period to his credit, the paintings were sold, auctioned & selected at national and internal art platforms, auction houses and museums including Asia House, Sotheby’s, Bonham and Asia Pacific Museum, Pasadena, USA. However according to some he never got the state patronage probably because he always chose to stand for the right and never stopped speaking the truth.

Expressing most pressed upon issues on politics, society and economy with the help of common vocabulary Nagori talked not only about the plight of men but also spoke about the unjust treatment faced by the women of his society. Whether it is an early commission work of 1965 on war paintings or his later reflections upon the crisis of urban and rural Sindh, he favoured deep content keeping views that art must serve a purpose.

Talking about social disparity and political instability Nagori establishes a new visual lexis in his series of 40 paintings in 1988. Bomb blast, guns, Kalashankof, rape, ojhari, ….in some hands these forms might have been a gimmick but via Nagori’s hands they carry some sense of perseverance about the human behaviour, his intellect and sensitivity towards the surroundings. Sascha Akhtar in Dawn proclaims, ‘It is difficult to stare into a Nagori canvas, and not be moved by his singular mysterious, imaginative genius.’

Besides his brush Prof. Nagori had put his pen into action too to fight for right. Articles like ‘Can art be called Islamic’, ‘An artist’s place in society’ and ‘Art and Pakistani Press’ might have been controversial to some but insightful to many. His words same in the manner of his canvases share revolutionary thoughts and ideas about life, art and society.

An artist quite often by the society is considered ahead of his times. He feels little extra, thinks little extra and possesses an ability to foresee things. To be honest it is not an artist who is ahead of his time, it is in fact the society that generally lacks the sense to see. And therefore, a sensitive creative soul becomes the agent and acts as an eye opener for it. Words which are written by Nagori and words which are written about Nagori has confirmed him as an agent for change, as a reformer in art education and as a precursor of socio- politically conscious art work. A year before his departure, in 2010 he was awarded with the highest award President’s Pride of Performance for his contribution towards art and society.

Edvard Munch once said that without his pain and suffering he would not have achieved whatever he had. Likewise, Nagori while answering to her daughter seems to be acknowledging the bitterness, we feel through his work and word, as his source of happiness for it had helped him to continue to paint, to think, to achieve. He passes on that struggle to the generations to come by saying “art has to participate in popular development of an attitude which leads to a better society. If one is insensitive to the people around, then art is meaningless, existence is meaningless.”