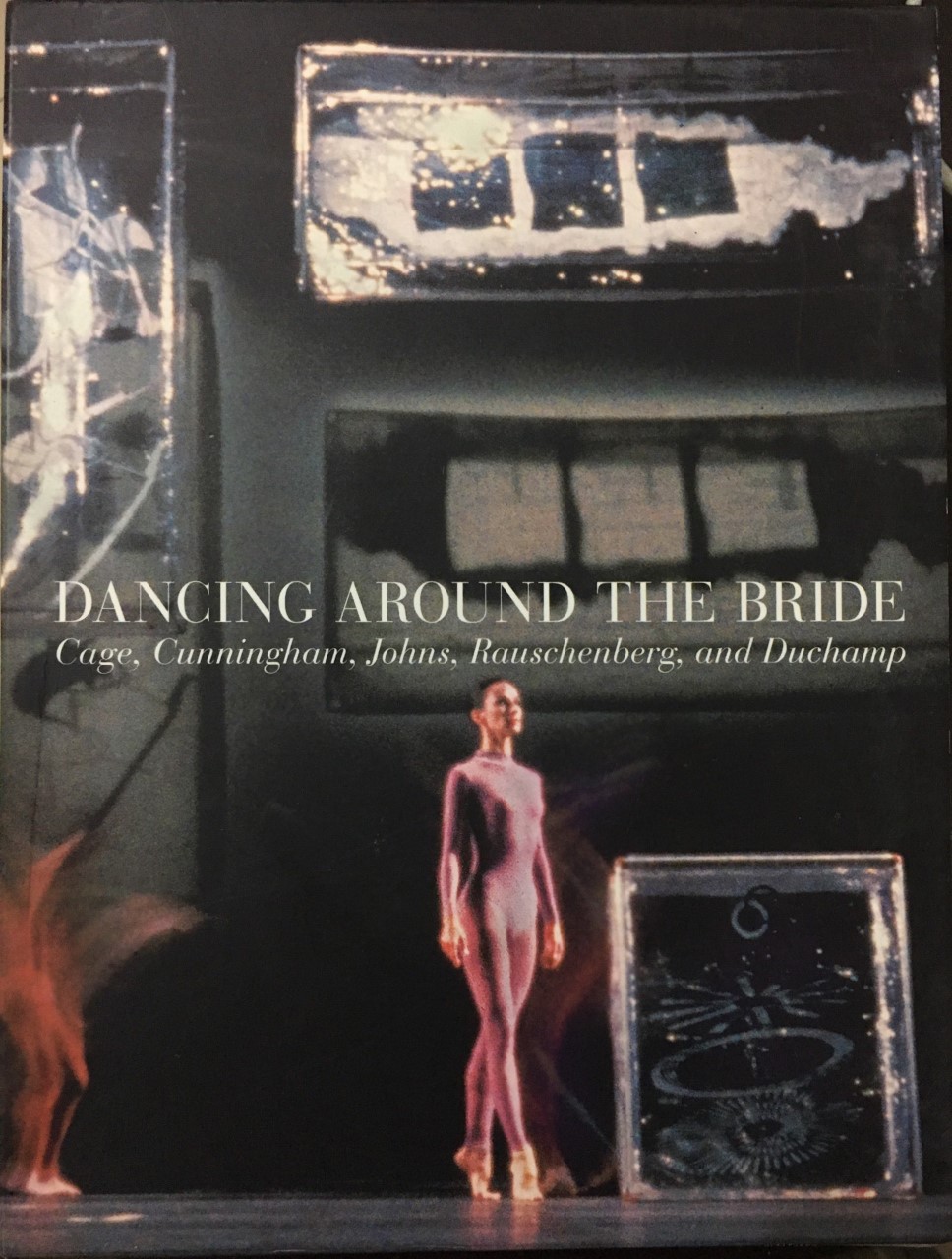 Edmund White, writing on Marcel Duchamp, informs: “He abandoned art altogether to play chess for fifteen years”; he further writes “Duchamp’s most imposing work, The Bride Bare by Her Bachelors, Even (also called The Large Glass) was shattered in storage and later painfully reassembled by the artist, who professed to find the cracks, as elements introduced by chance, to be highly attractive additions”.

It seems that The Bride is still beautiful, so we see ‘Dancing Around the Bride’, a volume of writings around and about the work, published by Philadelphia Museum of Art in association with Yale University Press, New Haven and London. The book is printed “on the occasion of the exhibition ‘Dancing Around the Bride: Cage, Cunningham, Johns, Rauschenberg, and Duchamp’. The exhibition was held at the Museum of Philadelphia in 2013 and later same year at the Barbican Art Gallery, London.

If one removes the publication from the exhibition – as is the fate of every exhibition catalogue – the book offers valuable texts about the particular work as well as the history of art after/due to Duchamp. Writings of artists, critics, cultural theorists have provided multiple ways to approach ‘The Bride….’, practice of Duchamp, and his impact (influence is a milder word!) on the generation after him such as the American Pop Artists. As mentioned in the Forward (by Timothy Rub) “Duchamp has come to dominate the landscape of contemporary art to an extent that would have been unimaginable in the early 1950s, when the next generation of artists, who are also subject of this exhibition that this volume accompanies, began to produce work that would inflect the course of modernism”.

The book makes a reader realize how a single work of art is pivotal and responsible in generating innumerable texts, relevant to that piece and to a general theory of modern and contemporary art. Acknowledging it, Reinaldo Laddago comments in the Introduction “The story… begins in the 1950s, when John Cage, Merce Cunningham, Jasper Johns, Robert Rauschenberg, and a small group of like-minded individuals ….. initiated one of the most extraordinary collaborative circles in modern art history”.

Actually, the history of modern art would have not been the same without Marcel Duchamp’s ‘The Fountain’ and other ready-mades. And more than that Duchamp’s stance on being detached from the act of art making, for the sake of chess – or breathing, as he mentions in his conversation recorded in the ‘Dialogues with Marcel Duchamp’ by Pierre Cabanne. On ‘The Aesthetic of Silence’ linked to John Cage’s compositions and performances too, Susan Sontag elaborates “Silence exists as a decision – in the exemplary suicide of the artist… who thereby testifies that he has gone ‘too far’”.

Talking about Marcel Duchamp’s connection with other artists, mainly those of American Pop, Calvin Tomkins, the author of many books on the artist, shares: “Marcel Duchamp, John Cage, Jean Tinguely, and Robert Rauschenberg do not constitute a movement of a school, nor they even share a common point of view”. Yet after a few years one starts to recognize some similarities in concerns of these artists who came after Duchamp.

Understandably because an artist, in his time, is only grouped with his predecessors, and not perceived in connection of his followers. He does not have any idea of these individuals. But due to strange structure of art history, an artist is usually ‘understood’ on the basis of who came after him. How his contribution led to open up new ways of seeing and saying (as in the case of Paul Cezanne). Some artists do not have direct disciples in their times and surroundings. Yet works and ideas from the depths of their studio sometime merge and emerge into a mainstream movement – without their consent or information.

However, one must be prepared to acknowledge the contribution of an artist who had changed the course of art, without his intention, design, or desire, still he remains the most important artist of twentieth century, like Duchamp. Although there is another course of art history, which moves beyond the signpost of individual artists, since they are heir to a tradition and contribute to course of art in future. In that case, Duchamp’s emergence was incredible, but “Had Marcel Duchamp not lived, it would have been necessary for someone exactly like him to live, to bring about, that is, the world as we begin to know and experience it”. (John Cage).