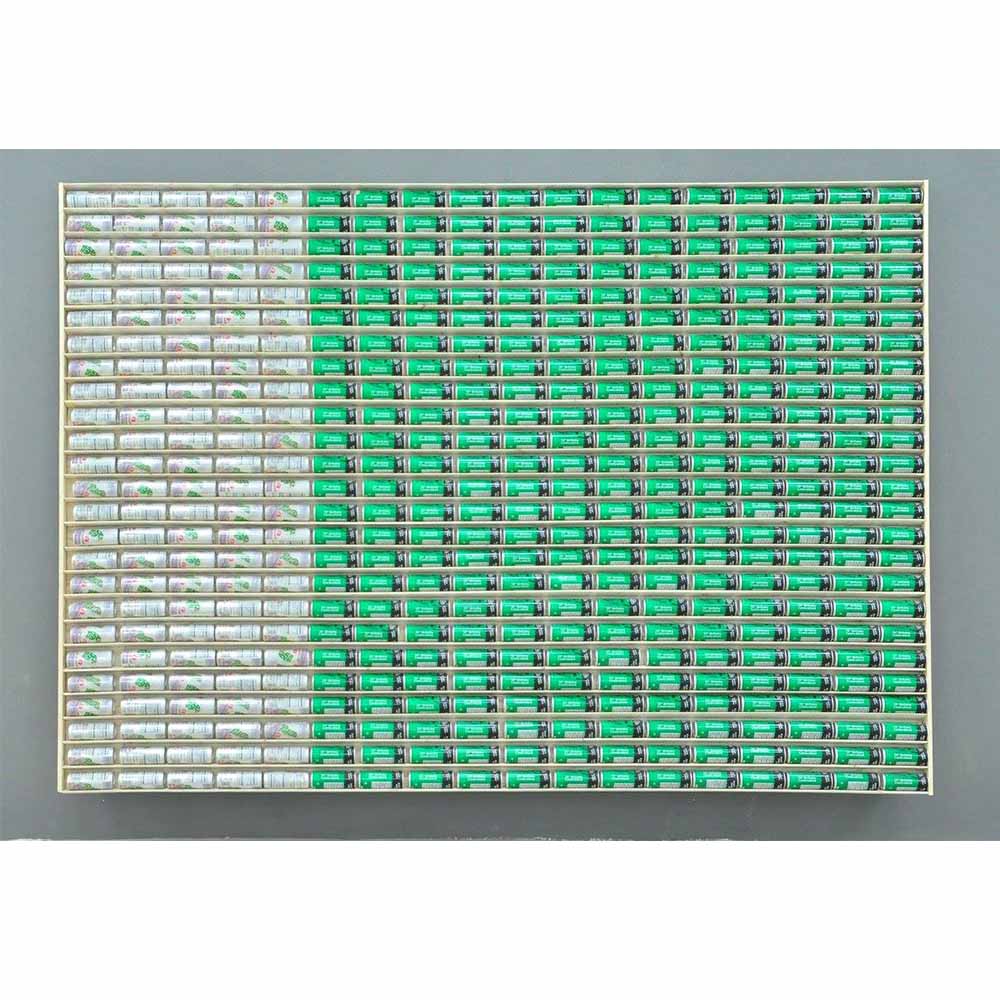 In commemoration of the 70th year of Pakistan’s inception, Sanat Initiative hosted a one-day reception, exhibiting the work of celebrated ar

If You Have A Garden In Your Library
Book Review: Gerhard Richter – A Life in Painting
Out of Focus: Chasing a Lost Legacy

In commemoration of the 70th year of Pakistan’s inception, Sanat Initiative hosted a one-day reception, exhibiting the work of celebrated artist, Muhammad Zeeshan. Now for those who have frequented this gallery would easily recall a similar event held back in 2015 on the anniversary of the Quaid’s birth. Titled, ‘Art Cash, Hard Cash’, Zeeshan lined the floors of the space with coins and then exchanged one of his coins with one from each visitor. This became a gesture for receiving the artist’s work for the exact monetary value it was paid for.

Similar to the previous show, the one held on 14th August was wrapped in mystery pre-opening, with nothing but the title ‘Refreshment’, the artist’s identity and an obscure photograph of the sky touching the sea to go on. But then again, anyone who has met the eccentric man knows that Zeeshan never fails to deliver.

The gallery lay vacant except for the grey wall near the entrance. On it hung a massive rectangular wooden structure hosting several rows of green and white Pakola cans and titled, ‘Flag Ceremony’. From a distance it became noticeable that the piece resembled the Pakistani flag minus the crescent and star. The audience was encouraged pick a can of their choice (the original Pakola flavor or white lychee) and refresh themselves with a nice drink, and that concluded the whole piece. Within the next three hours of its exhibition, the cans slowly disappeared until nothing but a wooden skeleton was left.

So how was this art? What exactly just happened? Well, firstly we understand that in honour of independence, the iconic colours were used in a similar orientation so as to visually represent the national flag. Out of all the internationally branded cans that could have been used, Zeeshan cleverly chose a beloved drink produced and packaged locally. Along with that, the canisters were limited edition, each one sporting the quote, ‘70th Birthday Celebrations’ alongside an image of Jinnah.

However, standing in front of the installation we realise that camouflaged under this display of nationalistic pride are questions of what art is in the 21st century. Zeeshan tackles a previous conversation he had with a fellow artist on the meaning of commercial art. Works presented in a gallery usually try their best to stray away from the term commercial as the contents of the work is the focus and not the sale. Consumerism can often be the topic of discussion in artworks but that is, traditionally, the only preferred association. On the other hand, Zeeshan not only tackles the idea, he raises questions about what makes a work commercial. The installation is quintessentially consumerist. A drink, whose whole existence and purpose is commercial is placed as the centred focus of a gallery. Furthermore, it is available for public consumption but no monetary exchange will take place. So does that make it commercial? Is sale the only factor in determining its consumerist value?

One can’t help but draw a visual linkage to ‘Campbell’s Soup Cans’ of 1962. Akin to the soda cans, paintings of identical soup containers were placed in a grid of thirty-two on the gallery wall. Andy Warhol, an already successful designer, revolutionised the art world by not only bringing imagery back but by also taking a mundane item and aimlessly replicating it so that eventually it would resemble the shelves of a local grocery store. His comment on mass production can very well be seen in this contemporary installation piece as well.

A final idea the artist manages to challenge with his art is the importance of an audience. What does a viewer mean for the artwork? In the case of this work, the piece would not succeed without human interaction; it was essential for them to come and take cans until nothing was left. What was interesting, and probably not anticipated, was reactions of the audience when they realized the reigns were free to do whatsoever with the cans.

There were several attempts to complete the flag by creating negative spaces shaped like the crescent and star. Later on, there seem to be a need to terminate the orientation completely and jumble the green and white containers until no resemblance remained. After that, more people came along, restoring order to the hues but with their own twist. The whole flag was present but horizontally inverted.  Children present at the opening were probably the most excited with the unlimited free drinks; after picking more than they could possibly drink at one time, the youngsters started installing their own can-towers.

All in all a work that excites the audience and confuses them while raising such strong questions is sure to be worth viewing. Zeeshan successfully managed to do both those things with his interactive installation. Of course, having Pakola in the vicinity is always an added bonus; who doesn’t love free soda once in a while.