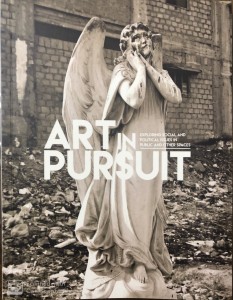 Interestingly public is not aware of public art, at least in Pakistan. Still artists of our surroundings are conscious of this social activity – rather responsibility, so we see innumerable examples of public art, even though not all could meet the standard of high art, yet these fulfil the criteria, these actions are situated at a shared space not owned by a gallery, a curator, a collector, or an artist for that matter.

Who owns the space for public art? Ideally the state. That invisible entity that is present and absent in our lives. You are free to put any message, advertisement, campaign, slogan on the streets of our metropolises, and the city government, if ever wakes up from it slumber would hardly notice messages about men’s health, cure for spiritual problems, schemes of commercial success, and banners of different political parties and their candidates on the walls across the country.

In a sense this is our public art, but there is another one; sanctioned by artists which we witness in two streams. Painted walls of cities which promote the bright side of our culture, heritage and society. Normally funded by paint factories, these deplorable pictures are proudly produced by students from various colleges, who passionately paint these images, without much consideration about the quality or usefulness of the imagery.

For many as long as art comes out of studio spaces, that’s enough, no matter if baptized art or not. But who could define art after Duchamp? Descriptions, classifications, and categorization are now the pursuit of past, because today everything is art, even if not claimed as one, because it will be by tomorrow!

In that scenario, a publication probing the question of public art is significant, because it does not solve any issues, but presents points to ponder upon. Vasl Artists’ Association’s latest publication Art in Pursuit “compiles artists, critics and cultural commentators’ perspectives on a series of public art projects”. It includes essay, images and documentations relating to public art projects in Pakistan, particularly in Karachi.

The breath-taking picture on the cover of the book is of a stone angel, from a Christian cemetery (Gora Qabrustan). The way this and of another sculpture, on page 94, are photographed, standing tall amid accumulated trash, or against the bare wall of a block of flats, represent the present reality of Karachi. These pictures of Farooq Soomro offer a different discourse on the question and identity of public art. Mortuary statues are art, and situated in public space, but both the imagery of Western angels and the location of a Christian graveyard are not too much public, any more.

The book is an attempt to remind and reclaim the public spaces for art since it presents discussion the possibilities and strategies for making public space possible to create art. Natashi Jozi’s Performance Film, Saat Daryaon Ke Paani Se Dhuli Meri Rooh, Phir Bhi Rahi Gadli, is documented in a photo essay with pictures of performance and text by Jozi, she explains: “The selection of texts for this performance was based on the accessibility of language”. In her essay Natasha Jozi talks about Performance, which “in public space manifests on multiple levels. Chance plays a great part in defining the parameters of engagement with the performer/performance”.

Examples are included in the slim volume of public art projects, such as Noman Siddiqui’s The Throwaway Culture, of abandoned cars left in civic sites with vegetation sprouting in them due to neglect. Siddiqui points to a fact often forgotten: nature eventually will take over culture. Plants are oozing out of doors, seats and boot, so an industrial vehicle becomes a bed for natural growth. However, the question of public and art is a precarious one, because on the one hand you have Naiza Khan’s Henna Hands and Ayesha Jatoi’s Clothes Line, works which arguably were created not for public, but more for their documentation in the art canon. The scale, impact and relevance of these attempts were not as visible or vital as some of the works like Zahoor ul Akhlaq’s sculpture for Maritime Museum Karachi, or even Benazir Bhutto Monument in Clifton Karachi. Both of these, in contrast to previous two examples converse with public at large, confirming that public art is not a work installed or inserted at a public space, but a work that communicates with larger population. Nimra Khan in her essay points out this “This issue with most public art then seems to be that while it seeks to bring art to common man, there is little effort to actually understand who this common man is, and what he wants”.

Quddus Mirza in his essay unpacks the assumptions of public art in Pakistan, taking the situation in which art is not supported by public institutions, so private establishments turns into parallel venues/ventures; because “it seems extraneous to step out of gallery space and focus on public art because, in actuality, here the public space is a carefully chosen arena where remnants of artists’ interventions are only valid and effective when these are documented and presented in a discussion on art at a gallery, art institution, seminar, conference or biennale”.

The publication – commendably presents diverse points of view on public and art, a much-needed document in order to understand what we see, how we see, and where we see.