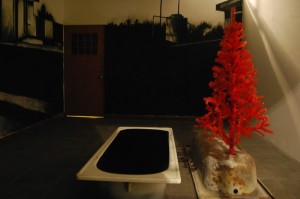 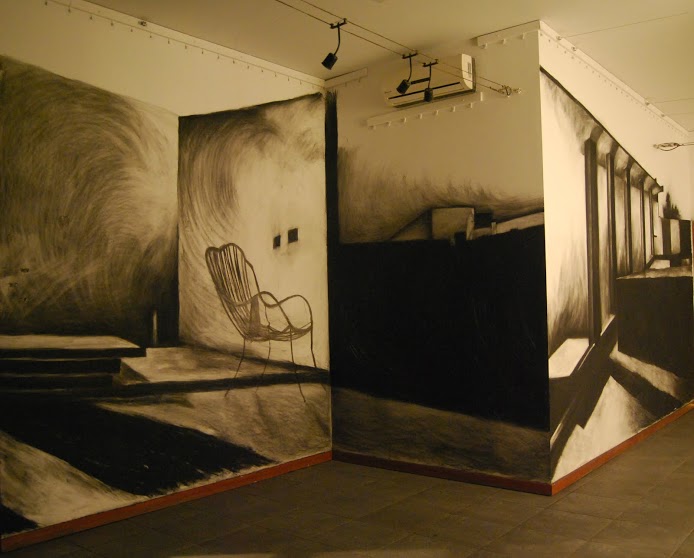 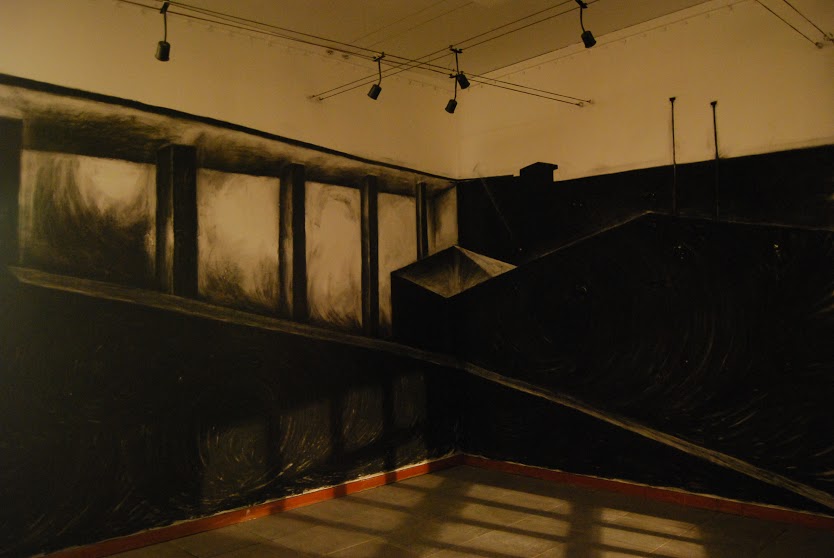 It took a few moments for me to realize that this was it. The gallery is abandoned (not unexpected considering this is not the opening), unlit (also not surprising since many exhibition venues effectively close down until the occasional visitor has the impropriety to drop by) and on the walls hangs not a thing. There is some relief in seeing the visuals directly drawn upon the gallery and immediately, this becomes a more negotiable space as Julius John’s markings seem to reclaim it from its institutional framework. The show, according to the curatorial note, is inspired from the Bible verse ‘… and darkness came over the whole land until three in the afternoon, for the sun stopped shining.’ (Luke 23:44-45).

This verse is situated around the time of the crucifixion and seems to signify a displeased god and a doomed messiah-less land. John is clearly not far from the point. He is a resident of Kot Lakhpat, an area that is grated from affluent neighborhoods with ominous boundaries including a ganda nala and an attempted road construction that has split many homes into pieces. Allow me contribute to the overuse of the word ‘literally’ to accurately precede that description as innards of these homes have been on display  since they were so clumsily cross sectioned. Moreover, Kot Lakhpat also happens to be inhabited densely by a religious minority namely the Christians which again explains the reference to the Bible verse. John himself, however, takes pains to emphasize the fact that his practice does not claim to represent but only, observe.

This is evident in his visuals which at first sight are seemingly mundane: architectural silhouettes, a casual garden chair, a water reservoir… but once recognition fades and intuition kicks in, it is the immersive darkness of these walls that is most captivating. John transports the viewer into an unwitnessed sense of the area, as if one is alone atop a balcony amidst these silently populated houses, wondering whether anyone really breathes in them at all. It is the blackness that allows you to enter this space while the swirling crayon marks manage to convey a sense of unrest.

And yet while the more impersonal drawings take you on this detour out of the gallery, what are functionally the more personal objects, the bathtubs, surprisingly offer a more collective comment.  A red plastic Christmas tree standing from an inverted bathtub is almost emblematic as it is the only dash of color in the entire show. This is augmented by the shadows it casts over a blank wall behind it. The other bathtub is filled to the rim with a frozen black tar like substance, perhaps a reference to the ganda nala and how it inevitably seeps in through the taps (literally and metaphorically) and becomes definitive of a neighborhood and a stereotype.

Although John’s work stems from Kot Lakhpat, its comment is not curtailed. As is often the case, one sees oneself in what one doesn’t wish to see at all: John holds a mirror to the world beyond Kot Lakhpat.

However, while the artist has offered an experience that doesn’t involve the trading of objects and therefore, holds equal potential for any viewer regardless of the ability (or inclination) to acquire, one wonders if that is enough to subvert the context of a gallery space.  The word curation finds its root in cure, the dictionary meaning of which is to heal or preserve. A curator would ideally be concerned about encouraging discourse around the work and while the artist has made the work available, the onus of making it accessible lies with the curator and the gallery. Sadly artspeak in Lahore (for I cannot speak of any other city) does involve lots of chastising for the public that dares to be uninterested, there is either hesitancy or unwillingness on part of galleries to fully engage.  Some, of course, do try more than others but it is difficult to imagine these closeted rooms neatly tucked away from the roving eye as neutral public spaces. In case of this particular show, add the lack of any publically available prior information about the details of the event to the mix and you can be almost certain that only those on the gallery’s contact list and the artist’s social acquaintances were actually able to attend.

One cannot pragmatically hope that a gallery can inundate itself with whoever it is that we call the ‘common man’ but if a certain Common Man, by some miracle, catches wind of such exciting art and wishes to see it, is it at least possible? If not, then let’s brace ourselves for making lots of exciting art and nipping it in the bud (or inside the homes of private collectors) until we can’t sustain it as an industry.

Recently, while complaining about the lack of a gallery’s online presence in an exchange with its curator, something he said has since stayed with me, ‘We don’t need that kind of publicity’. Perhaps he had the best of intentions but I could not help but wonder what that kind of publicity was and whether I was relieved or alarmed to find myself on thatside of thatkindofpublicity.♦

Madyha J. Leghari is a visual artist, writer and a graduate in Fine Arts from the National College of Arts, She lives in Lahore