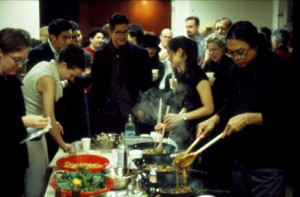 Any art activity that activates, engages, evokes, generates a response and brings about a spectacle technically falls under the ambit of art activism. Semantically, it means a kind of genre of art created by artists who mostly claim to be socially driven, are rooted in public sectors and who aspire to highlight the “incorrectness” of the status quo, be ‘morally correct’ and address a commonly occurring ‘problem’ through their work.

But isn’t this what most artists do? Just now, I picked up a few random ‘art statements’ of visual artists in Pakistan and almost all commented on or responded to the socio-political, geographical or anthropological nature of being and built their visual hypothesis around it.

Then wouldn’t that be included as art activism?

If art activism is to provoke, to connect, to generate an experience or to store one, why would engagement with and through the art be any different? Artists are increasingly exhibiting outside white cube spaces, engaging directly with a range of audiences and collaborating with multiple professions and creative industries. They seek to be more inclusive, understandable and communicative. Many have stopped using the term ‘artist’ for themselves and are increasingly adopting alternate names: cultural practitioners, social scientists, social workers – or simply makers. Perhaps they feel the need to serve a larger purpose through their work, one that is beyond mere beautification or aestheticizing. This might seem a defense mechanism for the arts – to be in a justifying and validating mode. Collocations such as ‘art and politics’, ‘art and society’, ‘art and culture’ and ‘art and activism’ hence exist as common duos or binaries, advocating and reinforcing that art is about idea generation and creativity that is meaningful, far-reaching and impactful.

And how would art activists be different? Do people who claim to be art activists actually make an impact and bring about a change? Does their ‘work of art’ provide the nourishment, impetus, or drive to stir a movement and bring a revolution? Maxine Greene, a revered and celebrated art educator said that “the arts, it has been said, cannot change the world, but they may change human beings who might change the world.”

But then, what is the difference between an ‘art activist’ and a ‘social activist’? What can ‘artists’ do that cultural practitioners, social workers, scientists, engineers, or activists cannot? Communication, creativity and critical thinking are some of the key domains of the arts but they skills exist in other disciplines also. So what is unique about the arts? Art, perhaps, stands for beauty, aesthetics, cherishing a spectacle or attaining a unique skill. Unassumingly, it also means mark making, gestural expertise or material exploration and also serves as a learning tool in cognitive development. Adding the word as a prefix to activism problematizes the role and responsibility of the Arts and its complex relation with activism and aesthetics.

So, what is aesthetics in contemporary art? What would it mean to aestheticize something?

An essay by Boris Groys explains it well: “In an art context, to aestheticize the things of the present means to discover their dysfunctional, absurd, unworkable character—everything that makes them nonusable, inefficient, obsolete. To aestheticize the present means to turn it into the dead past. In other words, artistic aestheticisation is the opposite of aestheticisation by means of design. The goal of design is to aesthetically improve the status quo—to make it more attractive. Art also accepts the status quo – but it accepts it as a corpse.”

For the sake of an extended argument about word associations, if art activism also serves a purpose and intends to improve or questions the status quo, then the term could, very well, be referred to as design activism, where the definition and semiotics of ‘design’ openly claim to solve a problem, serve a purpose or be made useful. Then why should it be called art activism? Indirectness, complexity and ambivalence may sometimes be the opposite of a call to action.

Stereotypically artistic and conventionally activist sensibilities may be conflicting or incompatible at times but that would bring in the question and institutionalization of aesthetics and the human conditioning associated with it.  “In the twentieth century, all criteria of quality and taste were abolished by different artistic avant-gardes. This criticism mainly operates according to notions of “aestheticization” and “spectacularity.” A certain intellectual tradition rooted in the writings of Walter Benjamin and Guy Debord states that the aestheticization and spectacularization of politics, including political protest, are bad things because they divert attention away from the practical goals of political protest and towards its aesthetic form. And this means that art cannot be used as a medium of a genuine political protest – because the use of art for political action necessarily aestheticizes this action, turns this action into a spectacle and, thus, neutralizes the practical effect of this action.“

Art activists – contrary to art critics who analyze aesthetics, beauty, genres and form – generate political protest and social activism outside the art-world through art. They, nonetheless want to ‘change’ and improve the world’ through their social practice but may not let go of the ‘artist’ in them.

One could argue that art (and the content it holds) is not for immediate consumption; it is meant to mystically and ambiguously settle in the subconscious and reveal itself slowly. Activism, however, is maybe meant to do just the opposite: it is to solicit instant responses and create an impact that is assertive, tangible and visible. Thus, the quasi art and its activism, do not compliment each other.

However, art activism could mean many things. Keeping its individual meaning intact, let’s look at it again. This phenomenon is also about finding connections between creative practice and socio-political engagement. It aims to make activism innovative and, simultaneously, nurture artists who work with and for a community.  Art activism would then be about finding creative methods for social intervention to modify or rectify a social issue. “There is an art to every practice, activism included. It’s what distinguishes the innovative from the routine, the elegant from the mundane. One thing that can help the “art of activism” is applying an artistic aesthetic tactically, strategically, and organizationally.

Protest art, political art, activist art, resistance art, revolution art, street art, graffiti art: all these are offshoots or siblings of the same social philosophy. They suggest an alternate discourse of values and civic systems, challenging ‘common’ or ‘popular’ aesthetics and critiquing the status quo, through creative acts. Resistance art or revolutionary art also contests hierarchal structures and exhibits civil disobedience. The work facilitates access to public spaces, and gives voice to the subaltern and the disenfranchised. This phenomenon then also gives rise to a multi-modal dialogue that values individual as well as communal voice. This kind of an intervention has its set of challenges, limitations and ethical considerations. It involves sustaining a relationship within communities, which is mutually rewarding. However, it also has a tendency to be self-congratulatory and often, this quasi politics within the art community, becomes a means of self-gratification.

But does one have to be a professional or trained ‘artist’ to create work that is provocative? One doesn’t. One can easily circumvent or dodge the art-world and the formal gallery structures and trespass the boundaries of art disciplines and genres to be more accessible to the masses. These ‘art works’ tend to have collective ownership; they frequently adopt universal iconography, and are mostly site-specific, performative, ephemeral, portable and disposable.

One may reflect on conventional art practices (including performance art, media art and the ‘traditional’, two-dimensional visual art practice) in a region and, through those artifacts, be able to understand the fabric of a community. But could one be moved enough to change a belief system or outlook on life by doing the same?

Film is one of the strongest and most communicative forms of media art – a synergy of a wide range of forms, mediums and human resource. It has the power to inspire, influence and rekindle, and also to transform belief systems. Coincidentally (or ironically), the last three films I watched epitomized, for me, the idea of activism in contemporary cinema; subtle and piercing. The first of the three, a recent comedy by Nancy Meyers was about a woman who creates and runs a successful online fashion site while her husband takes cares of their daughter as a ‘stay-at-home father’. The story builds around the challenges she still faces in contemporary New York but manages to strike an ideal balance between her work and family life. The two-hour film’s rhetoric addresses a paradigm shift and ascertains, not so didactically, a further change in gender roles and societal perceptions.

The second film was a Bollywood blockbuster that elaborated on the experiences of a sperm donor and his relationship with his wife. As the story unfolded, it presented a soft, alternate narrative of a proscribed occupation in South Asia, and the taboos associated with it.

The third film of the lot was about a man who made a vow to himself to only believe and acknowledge what he sees or experiences first hand. As a consequence, and at the expense of distressing his family with his quest for ‘unlearning’, he started searching for the basics of being. The film explored the nature of perception and questioned the epistemological co-construction of human experience and the source of understanding ‘reality’.

Alternatively, Da Vinci’s Mona Lisa, Vincent Van Gogh’s Starry Night, Marshal Duchamp’s Fountain signed “R.Mutt”, Rirkrit Tiravanija’s Pad Thai and Marina Abramović’s The Artist is Present, some of the most sought after masterpieces, are not just ‘artworks’. They are icons of paradigms shifts and have offered a distinctive and subversive vision; they have become spaces of stored experiences and are sites where ideas, movements and meanings are recreated and questioned. So, they too, will qualify as art activists.

Any work of art should ideally explore avenues of creative synergy to magnify impact and ensure sustainability. It should essentially touch the soul, become a spectacle, stimulate the senses, call for action or make an enduring impact. If it doesn’t, it fails its purpose. With this premise, either everything is art activism – or nothing is.