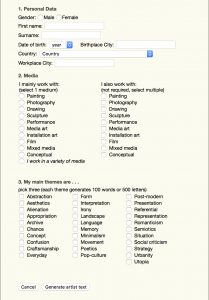 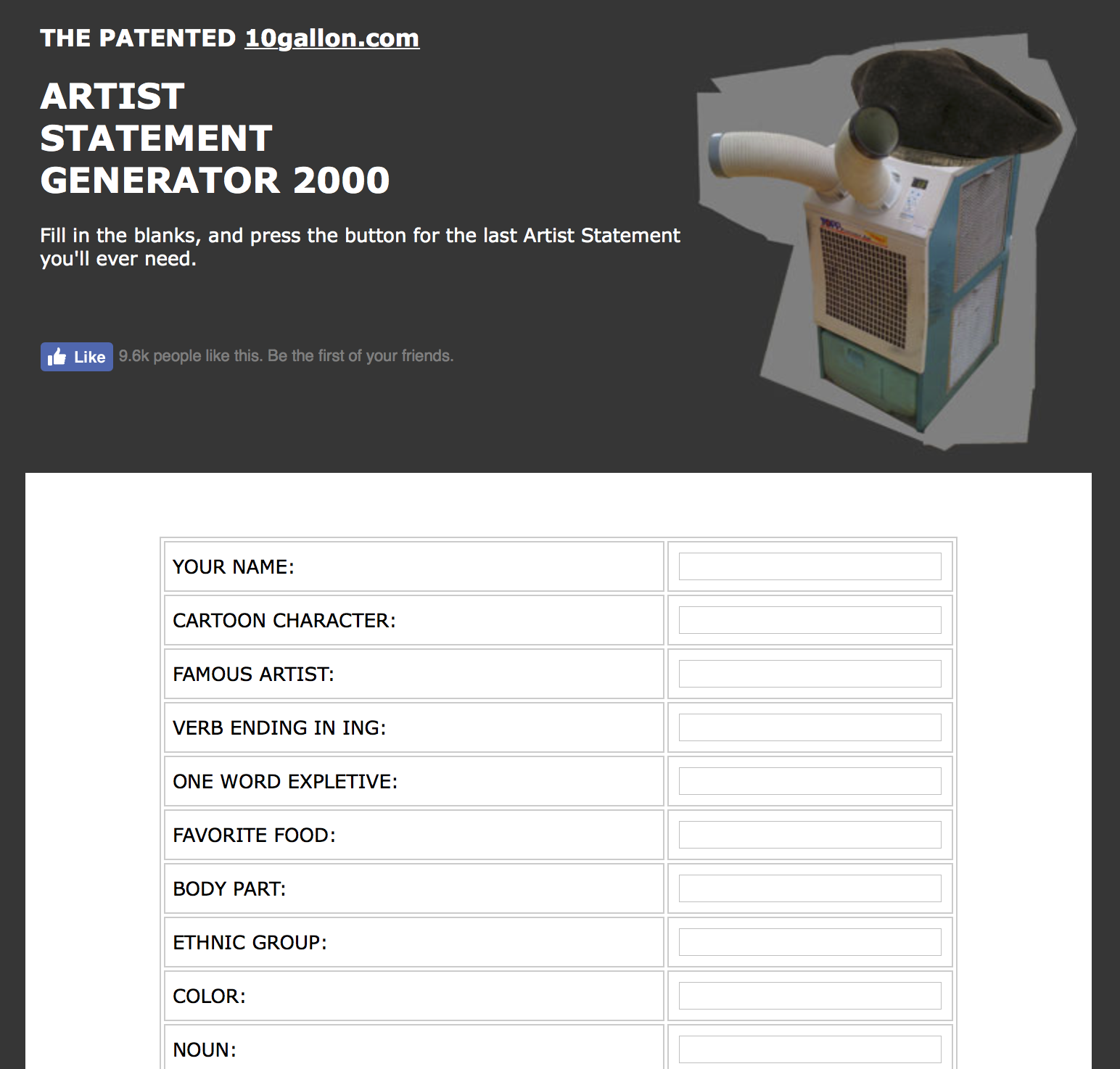 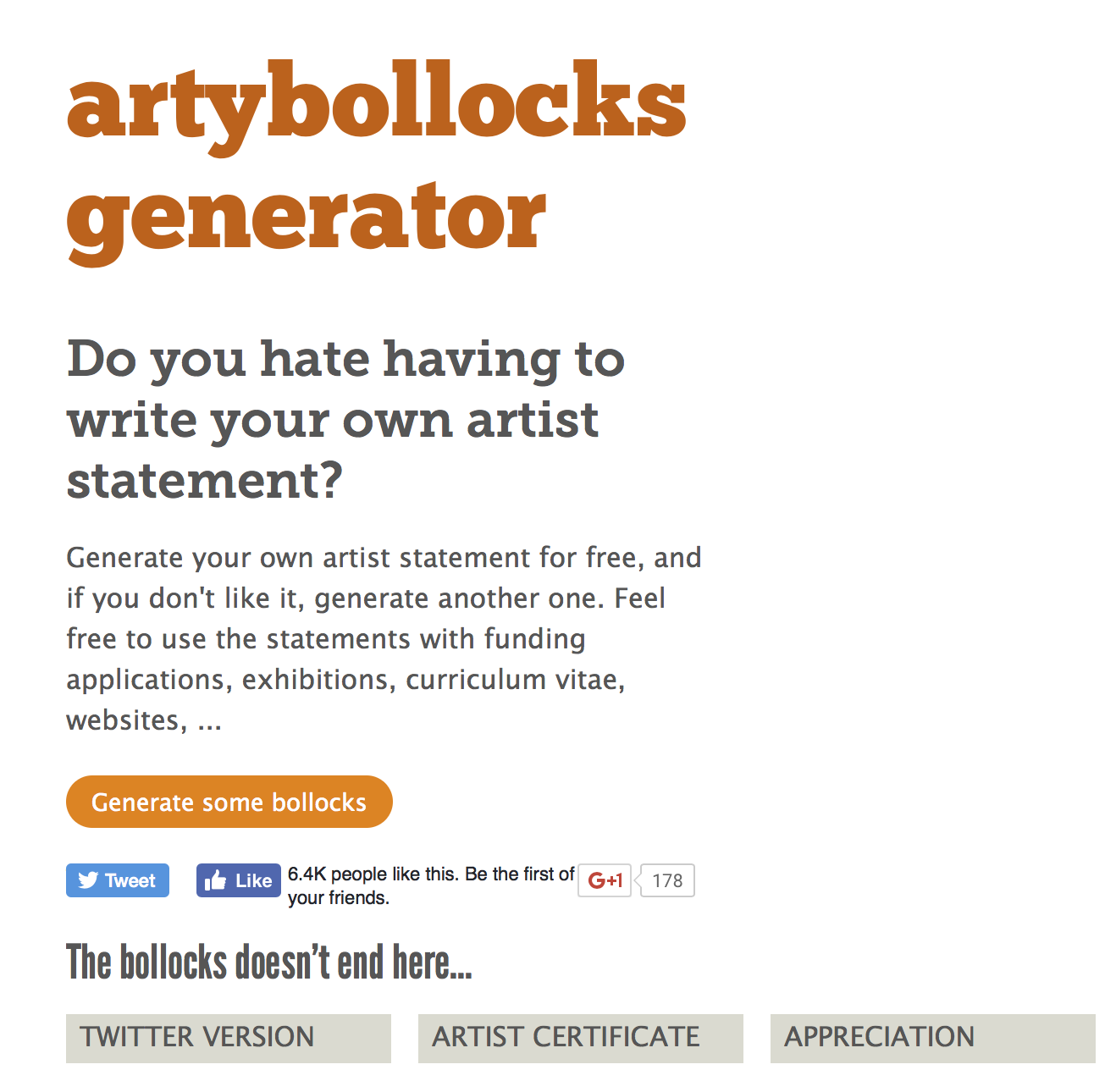 The necessity of the artist statement is agreed upon by all but those involved. In conversations with artists and critics, one often comes across a dismissal of the statement in favor of the work itself. It is proposed that the art at hand, being presumably visual, should be self explanatory through its optical and experiential prowess. However, such a rejection of the statement draws the visual in an overly rigid binary against (with?) the textual. It is unlikely that the statement, and the work to which it corresponds can perform the same interpretative task. In case that such does overlap, through their necessarily differing natures, it is still likely that the construction of meaning will qualitatively differ with each.

Moreover, such a rejection of the statement also draws an imaginary boundary around the extent of applicable context: if the experience of a work of art intersects with its coordinates in space and space, thus implicating not only its physical reality but also its possible pasts, the conception of a self-contained work of art can only really be an arbitrary distinction, which may on occasion be extended closely to include the statement as within the work itself.

In both instances, the rejection of the statement stems from a belief in the hierarchy of the visual over the texual. The visual is presumed to be the site of primary meaning where as the statement in textual format is supposed to function as an addendum. Hence, the statement, is often tucked out of sight in physical displays and is more predominantly visible in instances of indirect viewership, where it is assumed that the ‘aura’ of a physical object is lost. There are, on the other hand, context dependent works the experience of which is at best altered and at worst, incomplete without their accompanying texts. Again, if the limits of a autonomy of a work of art are marked uncertainly at best, the possibility of text extending itself from the peripheries to centre stage is adequately demonstrated by a number of works.

Another way in which the aforementioned dialectic can be shaped is to examine whether the statement lies under the influence of the artwork or vice-versa. Typically one would assume that the writing of the statement is a posthumous act. After the artist has arrived at a kind of closure or resolution of their inquiry should they be sitting down to report thus far on their activity. However, this again seems to be a simplistic division of reflection and action, neither of which is rid of the other or progresses linearly from one to the other. So, if the statement is being simultaneously shaped in the mind of the artist, it is of course possible that the artist subscribes and conforms to these words just as much as vice-versa is true. Moreover, the way that visual culture is spoken and written about, the way in which sense is constructed out of such is of course also steering the creation of this culture. It is not surprising then when artists from a certain time or a certain location being to sound as if in conversation with, if not outright reflection of each other. The statistical possibility of finding some words rather than others is not only the influence of a somewhat global art-speak and adaption of a seeming canon, but also plays to the politics of attention, visibility and available interpretation in the vicinity of an artist. For example, almost to the point of caricature, words such as ‘identity’, ‘reality’, ‘tradition’ are abound in statements by artists from Pakistan. In such a way, even if the particular statement of an artist is non-specific, the writing of such as a text vague enough to be widely applicable  and yet precise enough to correspond to its history, precedes the creation of the work itself. Our modes of living, their histories and locations determine our interests, both as artists and viewers. While of course challengeable, the artist statement to a certain extent remains written.

In addition to the creation of a work, it is natural that a statement also alters the reading of a work, which is the basis of one strain of resistance to it: some believe that the transcription of intention into text does the task for a viewer, amounting to a restrictive diktat which doesn’t allow for any intelligent intervention. While this may be true for a kind of statement that assumes itself in addendum and secondary, it is important also to recognize that perception and interpretation of a work of art changes in a time-sensitive manner accordingly with exposure to the respective artist statement. If the text is read before experiencing the work, it creates a kind of preemption; if read later, it allows room for revision; simultaneously, it may creates correspondence of a sort. All three variations allow for productive possibilities for creating meaning, in a way that the viewer is actively an involved participant. This also underlines that an artist statement may after all, not be as extraneous to the work as is typically imagined because the reading of a surface visually is similarly not always instantaneous: some element or another may take precedence and vice-versa, grounding the act of reading temporally in a way that the progression of time is complicated and non-linear.

Thus, the artist statement can function in many ways beyond the one ordinarily ascribed to it, particularly as it can serve to extend the site of work itself beyond the its physical confines. Akin to the material, the institution, the person, the statement or text offers another possibility that the artist can occupy. However, that is not to dismiss the complaints that many artists have against the format in which it is typically practiced.

In a way, the statement is often first contact, the primary material whereby artists themselves are explicitly explanatory of their intention and processes etc. However, it is impossible to deny that the task is performative. The statement is not the same, for example, as a page of a journal or an excerpt from a frank interview. It typically goes through many mediations and proofing before it makes the press release, placing the link between the artist and the work under further tension. The tone in which one is expected to explain oneself borrows from a pseudo-scientific objectivity, and while it must sound self-assured and it must assume responsibility, it has to shy away from self-congratulation. Similarly, on the one hand it has to be accessible or at least seductive enough to be able to compete with exponential amounts of ‘content’, but on the other hand, it must be fluent in a kind of language that demarcates and legitimizes the sharing of enthusiasms and thus allocates attention by the ‘artworld. This explains the passive voice, the surgical and almost nonsensical use of art-speak, and the necessary conversion of nuance to byte in many statements. It is also expected within its brevity to be comprehensive, and cohesive, encompassing all from intention to process to a linear historical trajectory. Influence, already, a tricky thing to pin down, is further complicated by being necessitated within a broad canonical art historical trajectory. Thus, despite the fact that the currency of artist statements lies with individuality, a huge majority of them end up sounding like each other.

When discussing why artists must write a statement, it may be equally important to consider why artists must be the ones to write these statements. Not only does this impose an interpretative task exclusively to the scope of activities we define as visual art as opposed to other cultural activities, but it also presumes that artists themselves are best qualified to offer the insights contained in the statement. The self of the artist is the necessary bridge through which a viewer can cross over to the work. While such primary sources are significant, the statement itself is not closer than journal entries, talks or interviews, all of which on first sight seem less structured. This necessary labour seems all the more suspect if we consider what kind of an artist can eschew the writing of a statement without significant consequence. Naturally, artists in early stages of their careers are more invested in the statement, whereas with increased acceptance, the burden to explain oneself continuously is relaxed and the labor of interpretative texts are shared across curators, museum, gallery and studio staffs. Similarly, it is important to consider whether viewership of a work of art and the readership of its accompanying statement overlap completely. While this may be the case for indirect, particularly virtual viewership, in a physical space, the statement is often tucked out of sight and not all will spare the patience to read through it. The wall text, the labels, the catalogue and other writing also seem to take precedence in many such instances. Thus, the statement is relegated to an excerpt in the press release. This is an interesting since most writing in the statement is almost paranoid in its enthusiastic adaption of a jargon and its careful construction of presentability, but it seems that the task is performed for no one in particular.

The artist statement, in most of its functions, seems to be easily replaceable by other delegated forms that already exist around the production and dissemination of art. Perhaps, it is this very flexibility that allows it both camouflage and metamorphosis. It can possibly be all that it can possibly be.