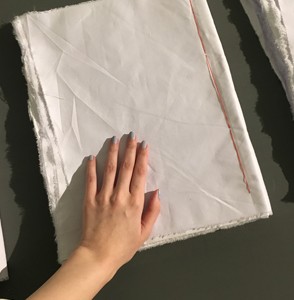 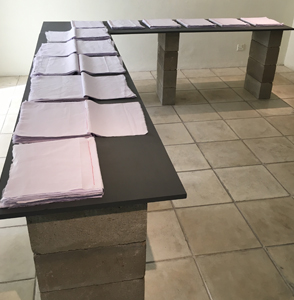 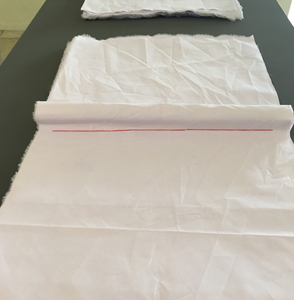 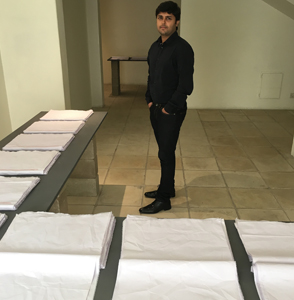 Julius John Alam is a graduate (with a distinction to boot) of the National College of Arts, Lahore, Pakistan, a Fulbright Scholar and a postgraduate of Parsons, The New School, New York, USA. The first time I met him in 2013, he was a fresh graduate. Now in 2016, we reunited on the cusp of a fresh graduation. We ran into each other in New York this May, with Alam preparing somewhat frenetically for his Masters in Fine Art degree show. Two months later we were catching up in Lahore. The prodigal son, degree in hand, was back home and back to business with the solo show titled ‘Shama Jalti Rahi’ (The Candle Kept Burning) at Koel Gallery, Karachi, marking his homecoming.

Nearly three years prior, I curated his first solo show at Rohtas Gallery, Lahore. It was a highly conceptual exhibit, with the chilling and poignant undertone of religious persecution. Gallery walls blackened in a charcoal cityscape of his Christian neighbourhood, a grave like tub standing lonesome in the corner filled with black tar and a lone, crimson Christmas tree, the colour of blood. From conception to realisation, his execution of the project blew both the audience and me away. It was picked up by the Lahore Literary Festival and recreated as part of their art exhibition that year. And so his return and latest showcase is like a circle complete.

Three years, a marriage, a child and an MFA later, I found him to be different yet inherently the same. Or is it at his core that he has changed – I cannot quite decide. Sometimes we have to cross the world to find our way back home. Interestingly enough, a two-year separation from home is what made his identification with it grow stronger. In 2013 I had to coax the Christian out of him. Today his sense of identity is a forgone conclusion; it is at the core of his art, his artistic license to challenge the injustices of the religious minority he belongs to, on his own terms. The subtle undertones of his first show have now developed into a form of peaceful interventionism. His current work is a bold memorialisation of the lives lost to violence in a community that is marginalised, persecuted and, worst of all, overlooked, even in death. Which is the ultimate insult to an unforgivable injury. Through his art, Alam takes on the mantle to honour and memorialise these forgotten lives.

This brings us to his latest exhibition. Shama Jalti Rahi (The Candle Kept Burning) began as a lamentation for the abhorrent lynching of a young Christian couple in 2014. Over time the piece has grown into a process of mourning and memorialising for the 51 lives taken by the blasphemy laws since they were included in the constitution of Pakistan in 1986. Out of lattha (a fabric used to wrap the dead before burial) Alam constructs 51 books, one for each life lost. This is a sacred process for him. He binds the white cotton pages by a single red thread sewn into the spine of the books. The process of ripping the fabric apart, symbolising the brutality that they suffered and the vulnerability of the victims, religious, social and economic to name a few, reflected in the fragility of the books. These tributes are his testament to the victims, the ritualistic process of piecing them together with care and precision is an ode to the sanctity of the lives lost.

Whether it was his intention or not, he is the voice of those from his community who were silenced brutally and unjustly. Seeing the space that he has created at Koel Gallery is one of those things that must be experienced and cannot be explained. Nevertheless, here is my attempt. Inside the architecturally airy and bright gallery, the aura is austere and cold. The books are placed, some open some closed, on four long makeshift consoles, like graves lined up in a cemetery. Even dealing with such dark subject matter, Alam has managed to stay above the fray of violence and destruction. The air in the ‘graveyard’ he has curated resonates with an overwhelming sense of peace. It forces the viewers to join in the collective mourning of the lost lives merely by being in the presence of this most modest mausoleum.

There is a potent gentleness to Alam’s work that stands in stark opposition to the violence from which it is born. It illustrates the resilience of the human spirit and proves that violence does not always beget violence. The candle that keeps burning is the hope that the heinous can sometimes give rise to the holy. But beautiful as these singular moments of passive protest are, the price for them remains unforgivably high. And we need far too many Julius Johns to even the scale.

Seher Tareen is a writer and curator who graduated with distinction with a masters degree from Central Saint Martin’s, with a thesis focusing on artists from war zones and conflict areas in Pakistan