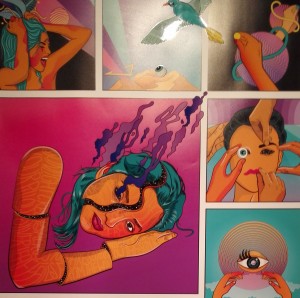 After a five year hiatus, the IVS Alumni Association returns with its 7th edition in Karachi. Titled ‘The Long and Short of It’, the curatorial team consisting of Emaan Rana, Halima Sadia, Humayun Memon, Numair Abbasi and Shahzaib Arif Shaikh (with Sameera Raja and Adeel uz Zafar acting as external jurors) put together works by alumni of the Indus Valley School of Art and Architecture. After an extensive open call and selection process, the show opened at the IVS Gallery on 10th August, 2019, also featuring Salt Arts with a musical performance by The Early Alarms and Tollcrane.

The only live performance in the show, Asim Ameen (FA 2018) looks at Pakistan’s relationship with the Arabic language, Islam and the Arabian Peninsula. Connecting the two regions through language and religion, Ameen’s performance consisted of him standing in one portion of the room throughout the whole piece, reciting words in Arabic in the style of a muezzin.

Babar Sheikh (CD 1999) works with video projection, creating a room within a room through several drapes. His multilayered, makeshift room provides a darkened space with videos being projected from four different angles, displaying imagery of the different kind of techniques evolved from his time as an art student to now.

Cyra Ali (FA 2010) plays with illusion as she uses geometrical shapes in her oil painting, which upon closer inspection, reveals the 3D fabric shapes embroidered by hand on top. The embroidered purple grapes merge into the painting as a whole.

Fahad Naveed (CD 2013) creates an installation mixed with a video of him reading out stories he had written in the past, along with old newspaper clippings he found when buying naan, framed on the wall. He juxtaposes the freshness of the naan with the nature of obsessively looking for fresh news, or ‘taaza khabrain’. Just like the naan would eventually turn stale, Naveed comments on the impermanence of the stories he himself examines in his journalism, and whether they too would eventually be tossed aside, forgotten or replaced.

Jovita Alvares (FA 2016) chooses to depict her journey through the narrative of the nine years she spent with Bruno, her dachshund dog. Her tête-bêche (head-to-tail) book describes this journey through the perspective of both her and the imaginative one of Bruno. The book contains digital prints of black and white ink drawings of Bruno and her, along with text.

Lubaina Rajbhoy (CD 2012) creates a multitude of works, using ink, thread, digital print and light on wood, glass and acrylic. Rajbhoy uses the imagery of a fetus, the stars and thread to create a visual connection, exploring the idea of memory and finding a connection with past lives existing throughout space and time.

A graduate of Architecture, Marvi Mazhar (AR 2009) applies her experience as a Heritage Activist into her work. She brings to light the Jufelhurst School that existed since 1931, but was demolished despite being a heritage building. She creates an ‘Imagined Museum’ in memory of the school, exhibiting archival material in the form of photographs, artifacts and letters.

Also a graduate of Architecture, Moyena Niazi (AR 1995) presents a series of acrylic and graphite paintings. Titled ‘It’s a Puzzle’, Niazi displayed her paintings as ambiguous, freeform shapes on canvases of varying sizes. With several nails across the display wall, her piece became interactive as she invited viewers to move the canvases around, flip them in different angles, and create their own version of the ‘puzzle’.

The only two graduates in Ceramics, Nabahat Lotia (2009) and Sadia Salim (1994) are also two of the senior visual artists in the exhibit. As a part of her ongoing practice of collecting plant forms from different landscapes, Salim tries to capture and recreate flower petals and twigs in Limoges and Porcelain. Lotia explores her personal exploration and discovery of clay and pottery through stoneware urns, creating an experiential installation by adding incense, which is customarily used in funeral rituals all over the world.

One of the more interactive pieces, Noreen Ali (FA 2015) creates a makeshift bathroom space, complete with a shower and curtain. Hidden in place of the shower and drain, we see two small screens behind the grill, displaying a video of a blinking eye. The videos of the eyes represent the unnerving feeling of being watched while in a private setting.

Razin Rubin (FA 2016) narrates her personal journey of losing her parents, and finding a way to represent their memory through their belongings. She recreates images of their furniture through the use of backlit digital prints on glass. Her use of dark surfaces helps highlight the gold contours of the furniture through the light box.

Rubab Paracha (AR 2009) creates maps of cities she has lived in over the course of ten years, readjusting the details of scale and urban structures to represent her emotional connection to each. She aims to capture and manipulate the cartography of her personal experience and journey throughout these different spaces.

Samya Arif’s (CD 2009) vibrant aesthetic is apparent in a print of her digital illustrations. Samya creates a female character and places her in ‘surreal landscapes’ to highlight the female perspective, allowing her character to escape the spaces inhabited by women in society, being in a carefree space instead. A mixture of matte and glossy, her digital print provides intriguing eye movement throughout each panel.

Also working with the idea of her journey as a woman in a patriarchal society, Sana Nasir’s (CD 2009) ballpoint drawings depict the idea of a ‘feminist utopia’ that she wishes to see in her lifetime. Her sensitive line drawings show a fictionalized version of light, being a metaphor for finding light within oneself and ‘fighting the darkness’.

In a collaborative piece, Wajeeha Abbasi (CD 2012) and Sharmeen Peshimam (CD 2007) create digital illustrations on lenticular film. Holographic and ever-changing with light, the multiple tiles represent the four archetypes described in Carl Jung’s ‘Map of the Soul’ (Persona and the Ego; Unconscious complexity; the Anima/Animus and the Shadow).

The show was significant not only because of the shared experiences of being students at IVS (for the participating artists and curatorial team, both) but also because of how each alumnus has transitioned from being a student to discovering their individual practices, each alumnus’ artistic and individualistic journey being presented in an amalgamated form.