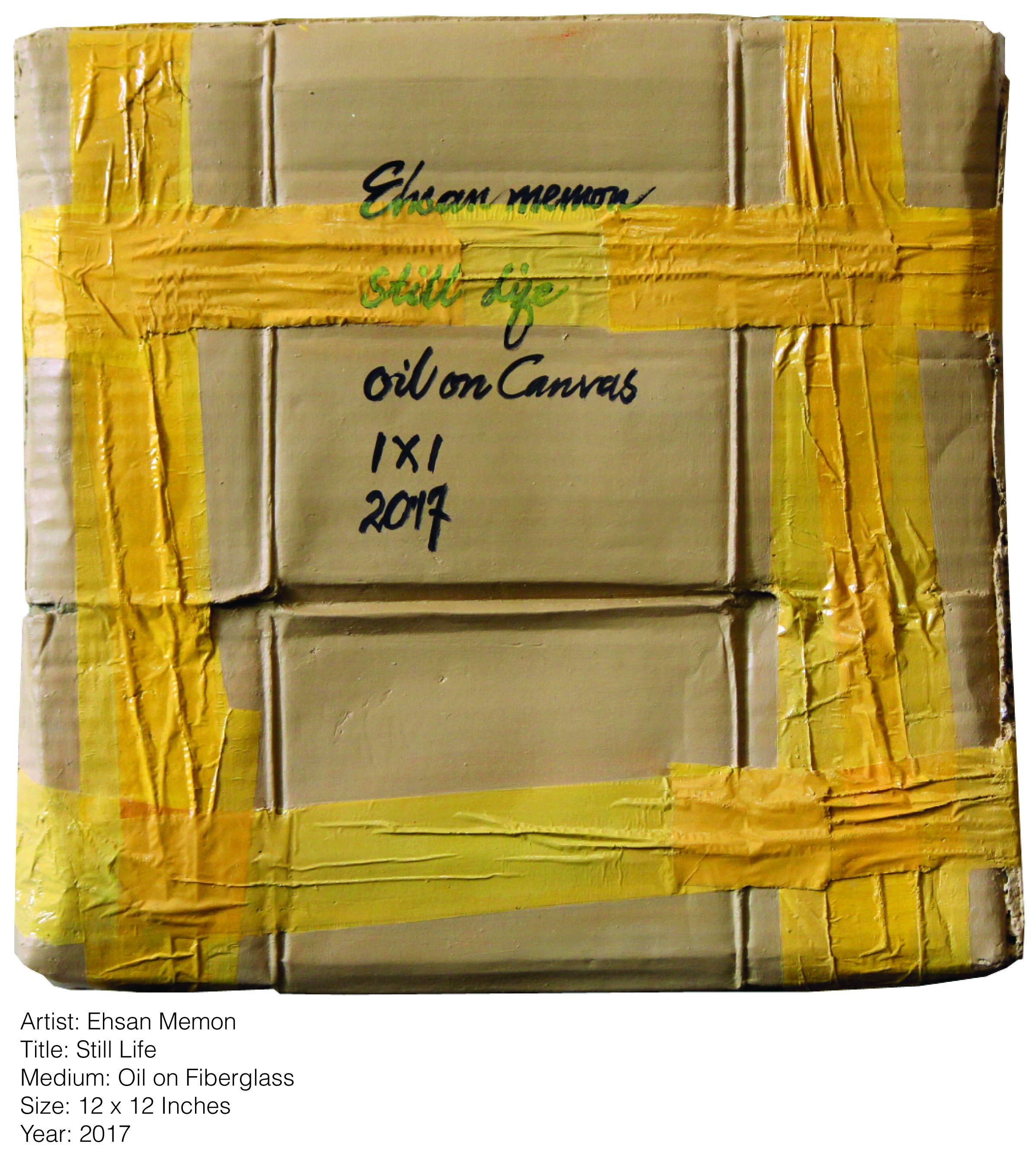 While most of us tend to accept life the way it is, it is the artists, writers and thinkers among us who reject the status quo, question societal norms and present an alternate view of reality for the rest of us to ponder. Social commentary is not new to art, with artists giving abstract concepts a tangible presence for centuries. Four such emerging artists come together in Canvas Gallery’s latest show “Social Objects” to talk about life and death, human nature and behaviour, perceptions, deceptions, representation, and communication though a religious, cultural and social context.

The show opens up with a striking installation by Arslan Farooqui which comments on the reality of death and fragility of life by recreating the classic Mughal miniature painting “Dying Inayat” of one of Emperor Jahangir’s attendants in the depths of sickness and at the cusp of death. While in a way it beautifies a horrifying moment, it also fills one with a strange dread, carrying with it an unsettling aura. This beautifully depicts the fine line between life and death, especially as the depiction is hyper-realistic, a portrait of a dying man that is almost alive. Elsewhere, Farooqui breathes life into limp and lifeless bodies through video projections of animations onto drawings and paintings that etch a thin line between life and death. Farooqui’s portrayal of death seems to romanticize the notion, rejecting its dark and foreboding finality. He believes we must not be afraid of death, as all our actions are motivated by it, and its inevitability is what gives meaning to life. He looks at death as a catalyst for change, a path to freedom of the soul, rather than its expiration.

Ahsan Javaid’s works question the ways in which we ingest knowledge and information, or rather the ways in which it is related to us by others; skewed, edited and manipulated. In a way, the idea of reality is challenged as flawed representation is pieced together to create an incomplete picture resulting in diluted inferences that lack meaning. This concept is actualized across a number of intriguing pieces, where images of our founding fathers are cut up and rearranged, recognizable yet with no meaningful information, a representation of our apathy towards our history and our heroes, a shallow respect that barely permeates our everyday lives and deeds. The textual pieces make similar commentaries on culture, religion and heritage, and the lack of any real understanding of either in Pakistani society.

Ehsan Memon’s imitation of reality draws parallels with human nature, urging us to look beyond the cursory. In this case we see a number of wrapped up parcels that appear to be overlooked canvases left leaning against the wall. The illusion is intriguing as it takes several close inspections and a look at the artwork details to figure out it is in fact a fiber glass sculpture. What is more interesting is that even after this discovery the mind remains curious, wanting a peak at the “real” artwork under the corrugated sheets, unable to grasp that we have been looking at it all along.

Hamid Ali Hanbhi’s work is derived from his experiences as a cinema signboard painter. His interactions with all kinds of people from all walks of life and diverse backgrounds play into his work as he tries to reconcile their imagined differences in light of their inherent similarities. His works again apply this concept to a religious and cultural narrative, with the assertion that in a wider sense we all carry homogenous beliefs while the differences in details are deliberately created in order to stand out.

This idea is well-encapsulated in his large untitled piece that appears to be an interweaving of color, which at closer inspection is a collection of different kinds of caps. The purpose remains the same; to cover the head, while the different designs and their religious and cultural significance separates one wearer from another in more ways than one. What is even more interesting however is the fact that in a way these differences seem to add more beauty to the piece. While embracing our similarities would create a more peaceful world, it is our personal quirks that make us who we are – unique individuals.

While the discussion centers on social issues, it is interesting to note that all works in some way or the other speak about deception or flawed perceptions, whether creating one or subtly commenting on its existence in human nature and in society. Perhaps the biggest social issue is our inability to be true to ourselves or to our beliefs. The works seem to urge us to put aside our differences, to stop running from death, to take off our masks, and step out of ignorance of the past and present realities, in order to build for ourselves a more peaceful future.