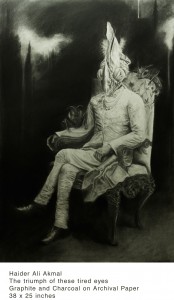 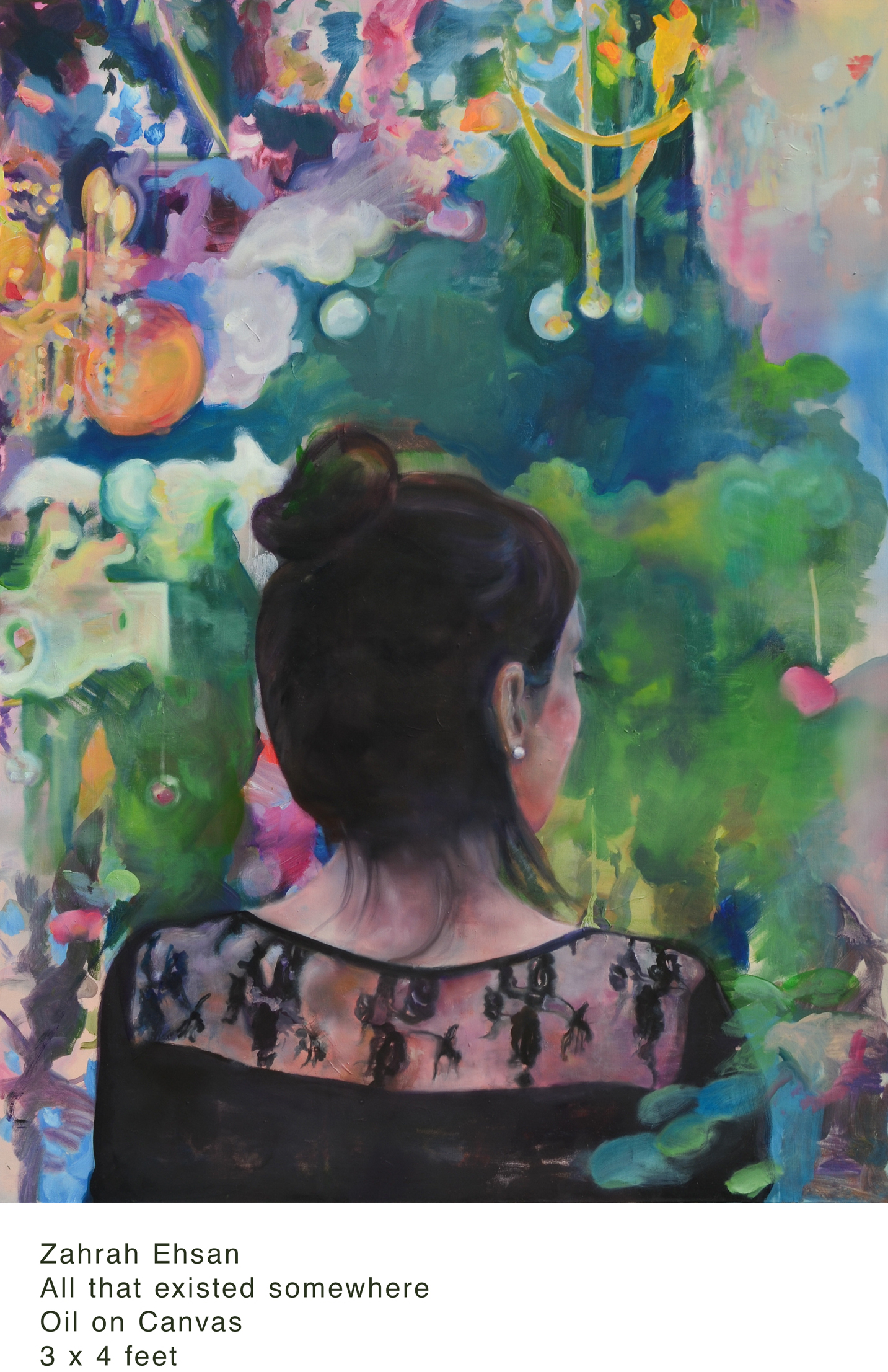 Not even, from a distance…

Zahrah Ehsan and Haider Ali Akmal invite us to ‘This tiny garden that we tend’. It is a fresh breeze from heaven because it wakes me up from the deliriousness of normality. It is a silent pact that ‘I am’ is always surrounded by pretty tendrils that hide the bugs but the artists dig deep down into the rabbit holes, nests, webs or crevasses of this garden to shovel a colorful, dark romance of being alive, in time and memory.

The works, in their conflict and discourse create a textual luster; we the people were deported from the Garden of Eden for our misbehavior. Kings and conquers through times used all force of their powers to mimic, interpret and build the perfect garden in this world. Through water channels and engineering marvels till today when the sheikhs have to import trees and grass for their modern-deserts. Ehsan‘s perfumed land of petals versus Akmal’s creatures which creep out of the soil into chiaroscuro light, lost and found at meeting their own self and then a garden with a girl who’s lost in it , it must be a similar situation when the Sufi saint Jalaluddin Rumi said “Somewhere beyond right and wrong, there is a garden. I will meet you there.”

Both the artists create a series of garden-y works. Medium works like wine here. It is guilty pleasure for both the artists, as if prohibited like the apple of Eden but so tempting that one has to indulge. This indulgence transfers to the viewer and therefore I’ve have no shame in accepting my non-academic, overtly bent and appreciative behavior at the moment. It has been after a long time that I have found actual pleasure of ‘medium’ in viewing and reviewing works. Akmal’s graphite and charcoal on archival paper and Ehsan’s oil on canvas are as intent and poised as their concerns yet as magically obscure and wild, as a garden, where we can never know or see all. It is a garden, inevitably surface in both cases …works as the environment or sky for the artists. Emptiness is fulfillment or maybe it’s the other way round.

Man has been slave to Metaphor. It is not a dearth which evokes a lust to express through words or images that are beyond reality – but a struggle to explain reality because reality itself is too consumed in itself. Vampires, werewolf’s, unicorns, bees, fireflies, caterpillars, demons or angels, all reside in the capillaries of memory and space. We pose with them in all glory like Akmal’s “Triumph of these tired eyes” or open ourselves up in pigments of oil paint and laze around behind the tendrils in a canvas of a garden like Ehsan’s. My aunt’s big Kafka book with most of his stories lies in my bookshelf and I can almost see an angry ‘Gregor’ (cockroach) creeping out of it and yelling; “talk about me in this review”. Both the artists consciously or subconsciously dissect the visions of their garden. Metaphors fall like rain here. What are Akmal’s creatures doing? Are they the actual face of memory or are they his hallucinations? Is the space he’s confronting an illusion after all? What is real? Ehsan and Akmal walk us through this garden yet they are not the regular walkers, we are left to wonder…on every step to the point identity, memory and time overlap. In his astounding novel ‘Metamorphosis’ where a man becomes a cockroach “Kafka, writes Susan Bernofsky; wanted us to see Gregor’s new body and condition with the same hazy focus with which Gregor himself discovers them.” (Kalb, B). We are in the same haze while walking in this garden; Ehsan’s wanderings are as incognito and marvelous as Akmal’s lavishly detailed hybrids. In a 1915 letter to his publisher Kafka pleads “The insect is not to be drawn. It is not even to be seen from a distance.” (Open Culture)

It’s as if half lost – back turned – portraits, gazing and posing men, women, animal, insect or tendrils are asking me “this work is not to be written about, it is not even to be theorized from a distance”. Akmal creeps back into the soil while Ehsan flies and sings, wings fluttering somewhere hidden amidst leaves in a branch.

Kalb, B. (2017). On Translating Kafka’s “The Metamorphosis”. [online] The New Yorker. Available at: http://www.newyorker.com/books/page-turner/on-translating-kafkas-the-metamorphosis [Accessed 25 May 2017].

Open Culture. (2017). Franz Kafka Says the Insect in The Metamorphosis Should Never Be Drawn; Vladimir Nabokov Draws It Anyway. [online] Available at: http://www.openculture.com/2015/10/franz-kafka-says-the-insect-in-the-metamorphosis-should-never-be-drawn.html [Accessed 25 May 2017].

This tiny garden, that we tend – works by Zahrah Ehsan and Haider Ali Akmal (Taseer Gallery)