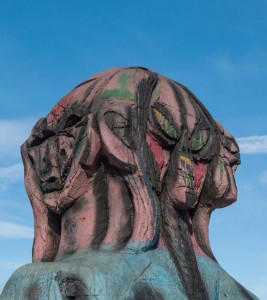 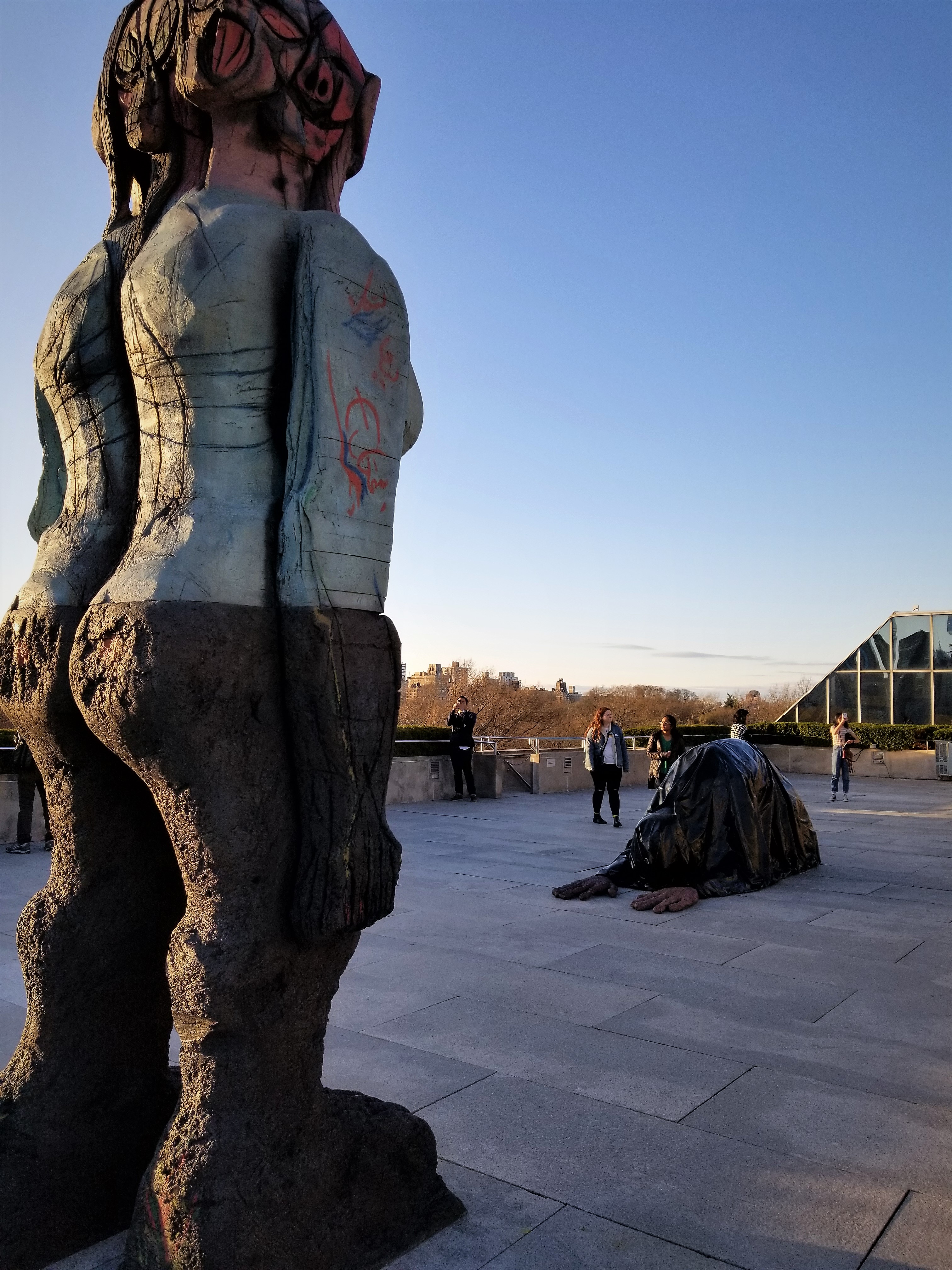 We Come in Peace: Huma Bhaba’s Post-Apocalyptic Vision at The Metropolitan Museum of Art

Pakistani-American artist Huma Bhaba’s most recent sculptural installation dominates the rooftop of the Metropolitan Museum of Art in New York, with its fantastic form and historical imagery. Draconian and almost demonic, the ironically titled We Come in Peace finds itself at the MET’s Iris and B. Gerald Cantor Roof Garden, amidst sky-high buildings where it meets New York’s horizon and chattering visitors every day. Curated by Shanay Jhaveri, the museum’s Assistant Curator of South Asian art, the pair is that of a free standing, larger than life figure (which also individually takes the same name as of the pair) while in front of it and in prostration lies the Benaam, which is covered in a distinguishable black drape. As the sixth annual, site-specific commission for the MET’s The Roof Garden Commission that began in 1987, We Come in Peace impresses with its radical size, dexterity in handling of material while simultaneously trails countless myths behind, questioning its own existence before addressing any existing social dilemmas.

The most conspicuous of the two, the installation We Come in Peace is a twelve-feet tall, seemingly intersex figure with five faces. Each of the faces has expressions hard to interpret, just as the sexuality of the figure is deliberately left ambiguous and vague. The figure is a fantasy of the artist, inspired by science fiction, and fantasy literature and movies. The piece exuberates horror as it casts deep impression upon the onlooker, echoing spirits of the past and realities of the future. Modeled with air dried clay, chicken wire, bronze, Styrofoam and cork, the sculpture depicts Bhaba’s long fascination with the respective materials, her legerdemain with their physical handling, and the sheer number of hours that must have gone into the processing of the god-like towering form.

The Benaam that prostrates in front of the sculpture is larger; at eighteen feet tall, it appears tame in its position, covered in a black bag that seems to be made with polythene. With only its tail and big hands that are uncovered, Benaam completes the pair with its horizontality as opposed to We Come in Peace, which is a mighty vertical installation. Perpendicular in position to each other, the pair makes a formal and a conceptual statement as they situate themselves on the rooftop of one of the world’s most renowned museums with the best art historical collections, amidst the contemporaneity of the bustling Manhattan skyline.

Indeed, as a pair, We Come in Peace makes countless references to art history per se, reminding us of African and Central Asian sculpture, while using material that was the choice of renowned sculptors such as Richard Serra, David Smith, Louise Bourgeois, and Alberto Giacometti. Since her MFA from Columbia in 1989, Bhaba self-taught sculptural techniques and material processing that has been expressed as formal inspirations from the science fiction movies of the 90s and 00s. Monsters from Jeepers Creepers, (2001), and Stalkers (1979) have made countless impressions upon her work since the past two decades as they aim to interpret the past with a lens of the contemporaneity that they locate themselves in. [1]

So, what does an installation like this can mean? Before we begin to interpret how the installation signifies, one ruminates why the pair itself is here. Is it an omen of death, misery and pain or is it a caveat to all of us, reminding us of the destruction that authoritative power has shed upon countless helpless and innocents, in each epoch of human history? For Bhaba, the human figure is a site of exchange, and not of language.[2] The pair reflects suffering and speaks of history of the mankind as it has unfolded itself amidst terror, tyranny and human sorrows. Benaam prostrates in from of the towering, demonic god yet if it stood up at its feet, it will prove to be taller and possibly mightier of the two. Covered in what some consider a dark, garbage bag, Benaam can be anything we want it to be; a pillar of human strength after suffering at the hands of war, colonial governments, and merciless dictatorship, or, a helpless embodiment of humanity, where each day ends under the rule of nepotism, racial and cultural bias or majoritarianism. Benaam is the fourth iteration of a form that Bhaba first sought in 2002, it has been perfected and now placed vis a vis its authoritative god, signifying loss, courage and strength. For some, the installation is a memorial to the wars in Iraq and Afghanistan, while for others, it is a token of commitment for those who have been dehumanized through the bitter aftermath of socio-politics and geo-political relations between the center and the periphery.

Yet it is still not impossible to ignore how Benaam is formally very similar to its past iterations; only radical size and placement being the points where it scores at top for ingenuity and originality. It is fair to say that if the artist chooses to reiterate the form again, one can hope for some variation or evolution in its formality, if not the conceptual framework that it arises from. How far the artist can go in taking inspiration from African sculpture, amalgamating them with Western pop graphics while expressing views on contemporary society, is also a matter of representation that critics will unravel. We Come in Peace is an invigorating addition to contemporary art, as much as it is a remarkable sight at the MET’s rooftop and will remain on display until October 28, 2018.

Photographs are taken by the author unless otherwise indicated.