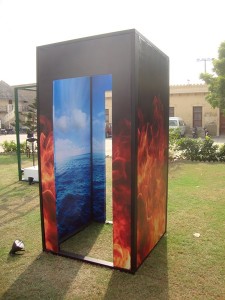 Ironically, reverberations of the political and religious tensions in the nation were felt in the city during the same weekend as the Pursukoon Karachi festival – a cultural initiative focus on peace and non violence. On Friday, no less than three protests traversed the Arts Council and National Academy for Performing Arts, two of the locations for the festival. Saturday dawned to a pair of bomb blasts, and Sunday witnessed anti-drone protests. It is important to note this because it is not unusual for the international and national media to pick up the news of upheaval. It is also not unusual for the cultural life of this city to be dimmed due to periodic spurts of unrest of violence. This is the story of Karachi that the rest of Pakistan knows and accepts.

Such context then makes the execution of this festival, one that sought to showcase the parallel artistic and cultural vibrancy of the city, even more poignant and powerful. In the words of the organizers ‘this festival emanated from a feeling of helplessness by the artistic community felt during these troubled times’. It was the starting of point of retaking ownership back from the so called ‘Na-Maloom Afraad’ who dominate the mainstream narrative, to the artistic community. Amidst a packed cultural calendar, three collaborative curatorial projects especially stood out for being able to engage in complicated and nuanced artistic conversation around social issues, and in their ability to bring together diverse artists.

Two of these, Hathiyar Nahin Piyaar (Love, not Weapons) a collaborative of 22 artists, and Aihad Karo, consisting of 55 artists, were at Manzar Akbar Hall in the Arts Council, the location of a vast majority of the exhibitions and other cultural events. Both of these exhibits complemented each other, in that they used the very familiar imagery of guns and bullets, pervasive in the Karachi street for violence, and using it to create powerful artistic works that sought to recreate a new, more peaceful meaning. Hathiyar Nahin Pyar used the trope of the toy gun, playthings that are given to children. The psychological symbolism of this concept was clear – the prevalence of real or toy guns in our society deadens the sense of fear and outrage. Rather than being this terrible instrument of violence, the gun has become appallingly familiar and accepted. The use of art then to re-create a narrative around this symbol is particularly apt. The diversity of works created out of this simple concept was fascinating. Some works bordered played with dark comedy and whimsy such as Maira Abid. Abid re-formulated the device into a martini like colourful confection, topped with mini-umbrellas at the opening, instead of bullets. Others used this opportunity to make somber statements, such as Noman Siddiqi printing an image of a gun attached to a balloon, flying away from earth, set amidst an imagined peaceful pastoral landscape. The poignant messages of the artists, of a weapon-free society shone through impressive and high-quality works.

Across the room, Aihad Karo, a larger but similar curatorial concept, also played on this idea of violence. 53 artists were each given the same canvas screen with a bullet printed on it. As Meher Afroze the curator stated ‘the challenge to these artists was to manipulate, employ or skew the image in any way they desired to visually express their protest against violence.’ The artists rose to the challenge commendably, with arguably Shakil Saigol’s reinterpretation standing out as one of the most powerful pieces. Saigol played on the very familiar popular image of Malala Yousufzai, the controversial and lauded education and women’s rights activist, whom he repainted as rising from the bullet. While the individual was rendered deliberately faceless, the artist sought to not only display hope, in the form of a well known symbol, but also showcase the transcendence of this symbol, in that anyone could be this activist, in the face of violence and evil. In using a controversial figure then, who was literally the target of a single bullet, the artist sought to create a powerful narrative, that played on the multi-layered themes of ownership, identity and protest.

At the National Academy for Performing Arts, across the street, the gardens were utilized for yet another collaborative exhibit – this time as standalone sculptures. Titled Shehr-e-Munn and curated by Arshad Faruqui, this exhibit explored the ‘possibilities of expression in a structured void’. Each artist was given a specific three dimensional cuboid space to work with and the results were impressive, both in their accessibility to the public and in their ability to showcase the focus of the festival. These contemporary pieces also stood in fascinating contrast to the NAPA building in the backdrop, built in the Mughal Revival style in more peaceful times. The artists were ingenious using the well known cultural commentary of the surroundings to create expressive moving works. A very strong piece in this exhibit that deserves mention was Dreamtime by Hamida Khatri and Aamir Habib. This work contrasted the chaotic and more organic public space [possibly of Karachi] versus the artificially created calmer private space through visually simple print images of fire and water. The outside printed of the structure, depicting fire, contrasted when one stepped inside with a calming ocean image. It is important to reflect on this as a commentary of the current state of Karachi. Our public spaces are messy and difficult, and we have retreated into our homes and walls for calm and space.

The organizers of Pursukoon must be commended for executing such a diverse and powerful festival. In addition to the three collaborative exhibits, there was photography, video, music, theater, folk dancing, crafts, children’s art and interactive art activities. Delightfully, rickshaws, covered with hopeful messages of a better Karachi, were available to take attendees from Arts Council to Cantt Station – an ingenious use of public transport. It was also refreshing to see a diverse audience participating in the festival. In a segregated city, where arts events might be criticized for catering to the upper class, one could see that the attendees represented all economic and racial classes – a hard feat to achieve. It is from this observation that the biggest criticism arises of this festival. Amidst a backdrop of diversity and inclusiveness, the continuous use of English to depict curatorial ideas, in the printed brochure, and in some of the presentations was puzzling. This continuous dilemma of language and access is one we must all grapple as we seek to create and showcase moving and powerful art that transcends class and race, and reaches out to all, thus fulfilling one of its most important mandates.