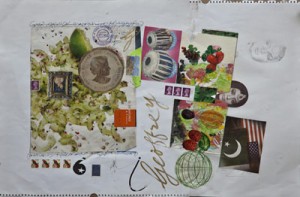 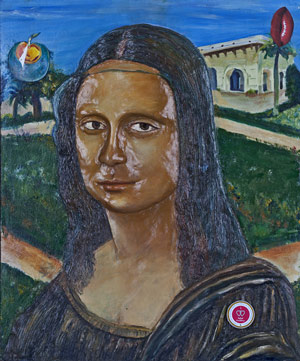 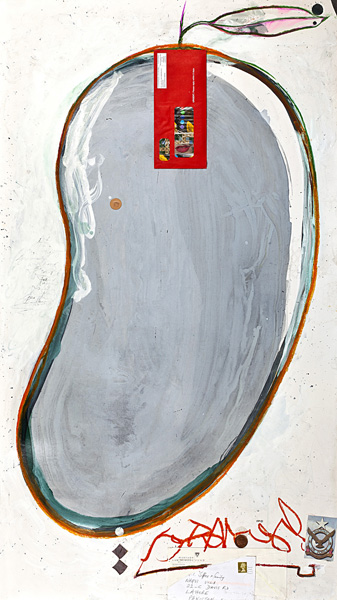 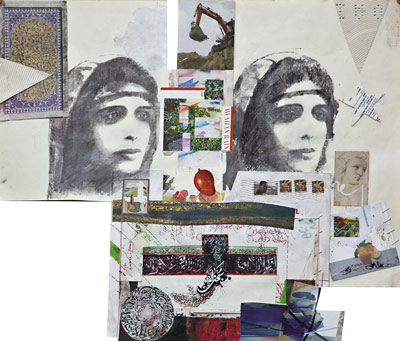 I got struck on impact, then drawn in deeper by the Iqbal Geoffrey room.  It was all very new to me and still ceases to amaze me. The energy and mystique became provocation and hunger to find out and know more.  Still greater surprise followed upon consulting The Other Story accompanying catalog, as well as Iqbal Geoffrey’s article in a special number of Rasheed Aræen’s Third Text periodical.  After what I’d seen of his output, I couldn’t help but be more intrigued by the life of Iqbal Geoffrey. His other distinction as a lawyer, his awards, the sheer youth in relation to the early work and career — including his brief sojourn from the law — not forgetting the fact that I’d never even heard of him or of his work before; whether connected to art, the avant-garde, non-Western artists, postwar history, the Indian subcontinent, Islamic cultures, United Kingdom, any other countries or subject-categories.

Iqbal Geoffrey’s paintings feature calligraphic gestures, made using various processes and substances.  They equal, rival and often outdo much of the better-known and more exposed work.  What becomes even more astonishing is that Iqbal Geoffrey arrived at this independently of what others did elsewhere, predating much which came later as well as not being just some mere derivative follower.  Unlike way too many Westerners irrationally romanticizing about “exotic people”, these works are by a real person, from such a culture and society, armed with knowledge and expertise of the subject (and also much more else besides), as well as exercising realism and even critique. Their highlight, calculated but with spontaneous gestural outbursts, always with their very own distinct and complex presence. With hindsight, somehow predating the glorious and crumple-zone, monochrome “products”, made by the tragi-heroic American, Steven Parrino. Additionally, Iqbal Geoffrey has made humorous, yet also serious, ideas and action based events or works, addressing the realities of both art and society’s values and the general status-quo.

The titles suggest a blow-by-blow progress-report and gameplay-enactment, storytelling about some experimental and inventive attempt, exploratory quest, hunt and adventurous journey of discovery — or even actual ongoing process and experience in themselves; with or without being towards arrival ever-afterwards; unclear, whether any desired target-goals came true, what they are, how that is, then if so what common laws-of-averages can be drawn as final-result, grand-score and quota-attainment.

Mentioning these works provides an opportunity to raise the issue of the interconnection between Iqbal Geoffrey’s. Years later, Iqbal Geoffrey threatened legal action for compensation over grievances concerning these and other works in storage and transit.

Other Iqbal Geoffrey pictorial works were groups of collages and paintings on paper, some of which made early innovative usage of colour Xerox® photocopying of found imagery.  Archival and diary-like, whether charting Iqbal Geoffrey’s own experience, witnessing external events, both or none of those, always celebratory of the visual, but also a reminder, acknowledgement and critique of mechanics and politics of both representation and perception.  Forerunners of the late hedonistic German, Martin Kippenberger’s works on hotel headed stationery.  Iqbal Geoffrey offered these for sale, according to “ability to pay.”

Servings as a symptom of the linkage between Iqbal Geoffrey’s paintings and more conceptual work, The Ashes of 28 paintings (Burnt down March 1989) in a glass phial, was a case-study specimen of Iqbal Geoffrey’s practice (or “tradition”), started as early-on as the 1950’s, of burning most of his finalized works when they’re new, regardless of his and any other’s belief or interest in them, whether or not they were ever exhibited or published.  Yet another groundbreaking innovation of Iqbal Geoffrey’s: “Getting-there-1st-and-doing-that-before-any-of-the-others-did.”  This time around, for whatever motives, the artist destroys their own existing productions, as art and creativity in itself, whether in a private action or public event, with or without documentation, maybe with the remains and relics deemed as art or making new work out of the leftovers. Positive destruction and un-wasteful disposal towards catharsis, sacrifice, riddance, changed mind, clean break, rift with the past, fresh start, moving-on.  Iqbal Geoffrey’s co-exponents include: Brandon Anschultz, John Baldessari, Marcel Broodthærs, Guglielmo Achille Cavellini, Jake & Dinos Chapman, Jan Dibbets, Nico Dockx & Jan Mast, Jean Dupuy, Tracey Emin & Sarah Lucas, Susan Hiller, Martin Kippenberger, Jiri Kolar, Michæl Landy, Bruce Mclean, Tania Mouraud, Robert Rauschenberg, Jean-Pierre Raynaud, Sarkis, Penny Slinger etc.

It’s not only his own artworks which Iqbal Geoffrey has thus “transformed”, but also legal-tender currency as well, leading to a certain American state and national laws being changed or even introduced.

All over the Iqbal Geoffrey room were various IDEA PROCESS SYSTEMS: Art Y Facts, “Conceptual sculptural items” from throughout his career.  Some housed in plastic leaflet holders, serving as vitrine cases: An engraved tombstone declaring the death of art, The Eyebrush (toothbrush, with razor-blade en lieu of bristles, improvised weaponry, used by prisoners and others), made as a personalised “gift” and “votive offering”, to a cultural “expert” (a lingual and visual play on “an eye for an eye and a tooth for a tooth”),  Sprung and set vermin-traps, baited with banknotes, each dedicated to a specific person,  A sinister and brutal market vendor’s birdcage — imprisoning a copy of Iqbal Geoffrey’s own book, Democracy in Pakistan, A cow “piggy-bank” money-box, engraved as “The Sacred Calf”.

Furthermore, there was a dispensing flask of a hybrid cross-between Trafalgar Square fountain water — and Iqbal Geoffrey’s urine — miracle formulæ solution from protest outside London’s National Gallery, after he was rejected for their “artist-in-residency” scheme in 1984 — despite his legal profession, no unfair dismissal tribunal action could be brought against the National Gallery — but media coverage and publicity ensued.

1.)  Unpublished material, By Accident, the author