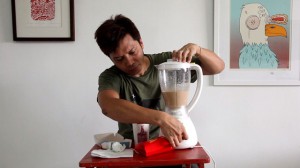 Panorama at The Singapore Art Museum

Both in scope and duration, the new show at the Singapore Art Museum (SAM) “PANORAMA: Recent Art from Contemporary Asia” is a big undertaking.

Comprised of 24 artists representing eight countries, the show includes 50 works of art spanning three floors of labyrinth-like spaces. (As the SAM happily resides in the historic building that originally served as St. Joseph’s Catholic boys’ school, most shows are at the mercy of the unusual show layout.)

With this exhibit running from April to late December 2012, “PANORAMA” marks SAM’s first time hosting a semi-permanent gallery. All works were taken directly from the museum’s collection and, according to SAM’s Assistant Curator David Chew, are an accurate representation of the museum’s geographic focus (primarily Southeast Asia, with a smattering of the balance of Asia and Australia) and showcases the themes most seen in contemporary art from this region. As is common with most museums, only a fraction of SAM’s collection is ever displayed, so “PANORAMA” has the honor of including works that have never been formally shown before.

“PANORAMA” continues SAM’s focus on contemporary art and making it accessible to a wide audience. In addition to the show flyer, visitors are treated to a “Director’s Guide to Contemporary Art” brochure that includes eight helpful tips about contemporary art to help guests better understand the work, then illustrates each point with an image from the show. Both the flyer and the guide are downloadable on the PANORAMA page of SAM website.

While a review show of this scale would not necessarily lend itself to an overriding theme, the never-ending tussle between old and new seems to be a concept explored again and again. The implications of that manifest themselves in the more niche topics of politics, feminism, and the effects on society of mass media, rapid urbanization, and globalization. In a few cases, all these themes appear to be rolled into in a single work. There are quieter pieces too that consider identity, spirituality, the role of ritual and symmetry, and tradition. But even the more contemplative works ultimately point toward challenging time and changing the present.

While a variety of mediums are represented in “PANORAMA”, new media figures are in many of the works—video, sound, computer graphics, stop action Claymation, and animated projection mapping just to name a few.

The show kicks off with Justin Lee’s Eat Fast Food Fast. This short video takes a humorous and somewhat stomach turning look at consumerism and our very contemporary need for speed. Lee videotapes himself sitting in front of a fast food meal of fish sandwich, fries and a soda. He then proceeds to delicately place the entire meal into a blender, buzzes all to a frothy, brown sludge and ingests. It is hard to watch to at times, but is wildly effective.

Australian Tracey Moffat’s video montages pieced together clips from movies and television to tell stories and pose questions around specific themes. Mother includes clips from the US 70’s television series “Maude” and the British sit-com “Absolutely Fabulous” to highlight the unique relationship, for better or worse, between mothers and daughters. Other montages include Love, Lip, Doomed, and Artists. Entertaining and often humorous, each themed video is set at a station complete with video screen and headphones, so viewers can “watch tv” and muse privately. Sculpture and installation also factor significantly in the show.

Thai artist Sakarin Kru-On’s sculpture installation Cloud Nine tackles the growing disparity between the classes. Mongrel dogs sculpted in pure white with scarlet wings representing the “have not’s” roam a cotton candy pink room, fighting, feasting, flying and suckling their young. What at first appears to be a table complete with a feast for the dogs, turns out to be only the foraging of scraps from a former meal, and the bright tones merely a facade for the daily struggle to survive. The result is a sort of a candy-coated ugliness of an existence we know is prevalent in so many corners of the world, but all too often overlooked or simply ignored.

Another Thai installation artist is Kedsua Loogthong. Her work Letters from Songkla consists of a grid of framed, watercolor envelopes complete with addresses and postal stamps, hung near oversized, embroidered versions of actual letters she received from her family while away at school. A writing desk and keepsake box round out the scene. This peaceful setting with the handcrafted, almost folksy elements, documents what is clearly a treasured correspondence for the artist and allows the visitor to ponder the good old days of snail mail when letter writing and the connections it fostered were arts unto themselves, before email and instant messaging made that all seem irrelevant.

Tough fewer in number, a selection of abstracts, photographs, and unusual portraits also have a place in “PANORAMA”.

Sherman Ong is a photographer from Singapore but his work Hanoi Haiku uses images from his residency in Vietnam to consider issues of tradition, transition, and memory. The work consists of a series of six panels, in each panel three images from the city are juxtaposed together. Ong invites the viewer to piece together their own narrative knowing each story will inevitably be shaped by the viewer’s own history. The brevity of images keeps the story “short” and thusly, haiku-like.

There is lots to see and contemplate at “PANORAMA” with regard to both the work itself and what this collection represents in terms of Southeast Asia’s contribution to contemporary art. Luckily with the show open until 25 December 2012 there is plenty of time to do both. “PANORAMA” part two is scheduled for 2013/2014.