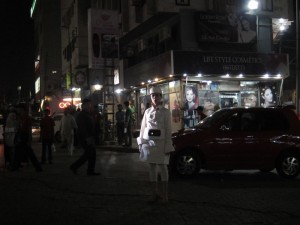 Vasl International Artists’ Workshop 2012 was an inventive, genre-specific residency, a refreshing interlude to an otherwise monotonous art scene, where the bulk of the production exists independently of the artist once it leaves the studio as displayed on gallery walls. The residency offered a unique platform for the creation of Performance, Moving Image and Sound installations and the eight participating artists took on the public spaces of Karachi with works based on their experiences in and of the city.

What was strikingly different about this particular residency was that all the artists performed at public places like the Seaview beachfront, Khadda Market in Defence Phase 5 and Port Grand. All performances were open to public, which made them interesting events to observe and experience.

Sarah Mumtaz did a performance at Indus Valley School of Art and Architecture, near the courtyard water feature. It was titled “Sarah learns to walk” that referred to her inability to walk as early as other children due to the effects of cerebral palsy. Dressed in a child’s frilly white dress, a bit like a Disney princess, Mumtaz’s performance comprised the simple act of getting up from a seated position on the floor and making her way to the edge of the pond but with exaggerated difficulty and slowness. She then stood in the water and yelled ‘ab mein chal sakti hoon’ (I can walk now!)

Zhou Bin’s performance took place at the Seaview beach.  He walked into the water until the waves were hip-high, his back to the spectators, while waving a black flag, which said, ‘Who is… ?’ Then, slowly he walked towards the spectators, chanting – ‘I am a terrorist’ repeating the words nonstop like an incantation. He then laid the flag down and walked away from the viewers and the beach.  The performance was a political statement on violence, questioning what constitutes a terrorist and how, if possible, to tell him/her apart from others.

Elisabeth Rosenthal chose the crowded alleys of Khadda market for her performance titled ‘Birdywork’ – which involved her being driven in to a crowd of passersby and shoppers in a rickshaw and exchanging whistles with the crowd. Elisabeth tried to engage the waiters of the nearby restaurants and the street children who ogled her with complete wonderment. There was a strange exchange of whistles between Elisabeth and the crowd. She says of the act:

“Communication with the audience is vital in my performances, where amidst my sculptures and sometimes strange vehicles or rare cars, I appear both as artist and artificial character. The play with expectations of the participants and me is evident in ‘Birdywork’, one of my performances in which I am reliant on the reaction of the audience. I simultaneously strive to elevate the somewhat ludicrous nature of whistling to something more valuable”

Performance art is an avenue that requires an emotional connection as well as a temporary commitment of time from the spectator. It is time dependent and live and thus excites the spectator with its unpredictability.  These elements leave a memorable impact on the viewer.

Muzzumil Ruheel from Karachi sets up a noisy yet captivating installation wherein he sets up 23 TVs on the floor of the Gandhara art gallery. They were tuned to various Pakistani news channels, all blaring with news reports simultaneously.  This installation was aptly named ‘Yak yak yak’ the onomatopoeic expression of loud, sensationalistic journalism that pervades the Pakistani drawing room. In a way, it was also a sound piece because the collective resonance was disturbing and disallowed the viewer from being able to linger in the room for more than a few seconds. Later at Port Grand, Ruheel installed a sound piece inspired by the same chaotic reverberations. Interestingly enough, he chose to place this sound piece at the large Banyan tree that grows at the center of the promenade. When one would approach the grand old tree, the fuzzy noises could be heard much to the audience’s discomfiture.

Another artist who worked with surrounding noise was the Pindi based artist Zeeshan Younas. His piece titled ‘A sound box’ was placed on top of the gallery stairs and the viewer was required to open the black box and listen carefully. The sounds that emanated were an odd mix of various noises heard on the streets of the chaotic city. Younas’ other piece was much calmer and amusing. It was a moving image of his animated portrait on a white screen glancing left to right, as if looking back at the passersby.

Amna Saeed and Narjis Mirza collaborated to create an installation at Port Grand. They set an elegant dinner table for four but instead of food on the plates, they placed images which were shown on video screens, with headphones for listening to the sound effects. The idea was for the viewer to ‘ingest’ art like one consumes food. This quirky and thought provoking installation was placed at the entrance of Port Grand.

Islamabad/ Pindi based artist Amna Saeed, also produced a film inspired by the frenzied city of Karachi. “Life in Islamabad is like moving on a fast train. If one is too slow, one just slips off the track,” she explained. In the film, Saeed placed herself over mechanical objects resembling mirrors with a moving image of Karachi’s streets represented in the background.

Along with her performance at Indus Valley School, Sarah Mumtaz also created a video installation. It was a close shot of her mouth while she brushed her teeth rather energetically, maybe even with a hint of anger. She then painted her lips red smiled out at the viewer. The title of this film was ‘The opposite of beauty is not ugliness, it is indifference’.

Elisabeth Rosenthal, the artist who performed at Khadda market also did two films that she shot while she was at the beach in Karachi. Upon her arrival in Karachi, she was taken aback when she was told she could not go out walking by herself. She had expected to create peripatetic work but was denied the experience, and thus she resorted to filming at French beach in Karachi because of its exclusivity and secure surroundings.

Magda Fabianczyk produced a traveling sound piece which was later turned into a film presented at Port Grand. Inviting fellow participating artist Narjis Mirza to help, she got a truck with four loud speakers with Narjis’s voice booming out the invented catchphrase “more than me, less than you”. Fabianczyk’s work for this residency addressed the cultural divide, our differences and our similarities.

These last few years have seen a boom in contemporary and post modern art. Out-of-gallery spaces are finally being explored. The rise of post modernism in Pakistan is still fairly recent with artists exploring the idea of action, ambiguous sound or moving image as art. These forms involve the audience and demand their attention and emotional engagement.

It is fascinating to witness the evolution of Pakistani art. This residency comprised of works which the local audience have not be accustomed to. In it, the viewer was required to scratch the surface of the work and dig deeper into what lies underneath and to appreciate the tremendous effort needed to create such works. It requires the spectator to dive in, even for a few moments, into the consciousness of the artists; to see to hear or just to observe and understand where he/she is coming from. It is safe to say that a lot of unchartered territory was explored by the artists this time around. Artists, on their part reached out to the masses and gave them the opportunity to witness captivating and amusing human behavior which one does not chance upon every day.