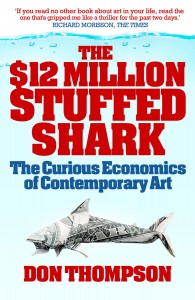 Don Thompson, a Harvard economist, decided to investigate the art market and its idiosyncrasies. His exhaustive, meticulously researched publication makes for exciting reading. It is called The $12 Million Stuffed Shark: The Curious Economics of Contemporary Art and is one of the books that are extremely hard to stop reading and they come around once every few decades. Perhaps, never has the art market been so illuminatingly exposed and with such comprehensive data to back every claim. The book reads like a crime drama with competing international players, conniving art dealers, buyers with wads of money and unbridled hubris – in short, a group of influencers almost completely unregulated or scrutinized ruling the roost.

The title of the book refers to Damien Hirst’s infamous formaldehyde injected tiger shark that had been commissioned by Charles Saatchi for £ 50,000 but had disintegrated with time compelling Hirst to replace the original shark with another one freshly caught and embalmed.  The person who bought the shark finally was Steve Cohen, a financial magnate about whom Thompson gives us intriguing tidbits of information dismissing our shock at the $12 million price tag because as he says Cohen’s “total income is just over $16 million a week, or $90,000 an hour. The shark cost him five days’ income.”

Thompson points to all the major players in the industry, providing us many talking points on the economics of art — engaging trivia that offer insight alongside information; like, the most expensive paintings sold at auction, the priciest ones sold privately, the world’s top 20 active collectors of contemporary art and the 25 major contemporary artists. Thompson has amassed such data as “the estimated value of world contemporary art sales being around $20 billion per year. This sounds like a lot, but it is only equal to the worldwide sales of Nike or Apple Computer, and half the annual worldwide sales of the Walt Disney Corporation. It equals to the gross national product of Iceland”.

The book is based on the premise that branding is the divine force in the universe of art buying and collecting, and the psychological compulsion for branding is prompted by one of the most common human traits – insecurity. Thompson quotes Howard Rutkowski, a former specialist at Sotheby’s explaining this phenomenon; “never underestimate how insecure buyers are about contemporary art, and how much they always need reassurance”. A branded product — in this case, an artist, collector, gallery or auction house – provides the warmth of validity to the buyer. Thompson writes, “in contemporary art, the greatest value-adding component comes from the branded auction houses, Christie’s and Sotheby’s. They connote status, quality and celebrity bidders with impressive wealth.” He talks of MoMA, Guggenheim and Tate being museum brands. “When Moma displays an artist’s work, it conveys a shared branding, adding to the work of the artist a luster that the art world calls provenance. The MoMA brand offers buyer reassurance.  He reminds us that “a few collectors, such as Charles Saatchi, and artists such as Damien Hirst, Jeff Koons and Andy Warhol have also achieved the status of recognized and respected brands. Thompson does not refer to the branding of art in derisive terms. He is stating the condition of the art world without judgment. He says, “art world practices change when a branded player is involved.”

Along the way, Thompson tells us hilarious anecdotes about the players. Marc Quinn’s Self, a cast of the artist’s head made from 9 pints of his own blood, was bought by Saatchi for £ 13,000 and sold for £ 1.5 million.

“Self was the subject of the frequently repeated story that Quinn’s frozen head had melted when the freezer was unplugged in Charles and Nigella’s Eaton Square kitchen during renovations. It was thought this must be an urban legend, because the head was resold after the defrosting was supposed to have occurred. However, Jane Furnival of London Telegraph reported, quoting Saatchi’s kitchen renovator that the unplugging and melting did happen, with the renovator horrified when a pool of blood seeped from the freezer. If this is true then Quinn replaced the head, at the cost of even more of his blood.”

The chapter on fakes is a must-read for collectors and buyers. Thompson has done his research and enlightens us about several scams by forgerers and dealers. “Tom Hoving, a former director of the Museum of Modern Art, estimates that up to 40% of the high-end market is made up of forged art. There were at one time six hundred Rembrandts hung in major museums around the world and another three hundred fifty in private collections. This aroused suspicion because scholars say the master only created 320 paintings”.

Thompson’s book is a significant publication for the art world. Though it doesn’t undermine the art, it questions the validity of the market in determining not only prices but the careers of artists and if we are to believe Thompson, a lot of success in the art world is about luck and being at the right place at the right time.

One Response to The $12 Million Stuffed Shark