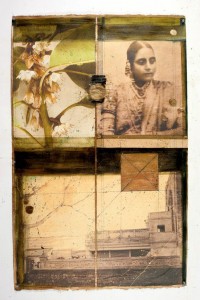 Noorjehan Bilgrami: Under the Molsri Tree

Noorjehan’s works are the music scores of a memory from afar as much as those of an instant in life, whose melodic, rhythmic and poetic aspects are played continuously like a raga.

Her sensitive universe and the sensorial perceptions that imbue it – sight, hearing, smell, touch and taste – came into being within her family environment in Hyderabad Deccan, India. It was probably in this house that Noorjehan found all the seeds she needed to create the wealth of expression forms she deploys in her work, ‘Under The Molsri Tree’, and where she was familiarised with the world of literature and poetry. The refining of her spirit through reading as well as the importance of books she continued to read throughout her life, defined early on the education of her mind and senses.

Noorjehan moves frequently between cities, countries, continents, impregnating her work with a sophisticated web of diagrams and maps figuring the borderlines she has crossed (literally and metaphorically): the memory of her ancestral home, the trace she has conserved of a city or sacred places that have since been forgotten, the souvenir of a significant event, an atmosphere or the experience of a moment whether historical, geopolitical, sensorial, emotional, spiritual or personal, all these aspects being intimately woven and contained in her work. These many plans and landscapes have the effect of a great Book of Life like an Atlas, which interweaves the intimately private and the universal: as if each work were the iconography of a space-time experience, whose precision, simplicity, symmetry and balance maintain all the intimate resonance of her private experience of life, as much as the magnitude of a universal vision. Thus her latest exhibition is made up ofmorceaux choisis from her oeuvre: drawings, photographs, video installation, mixed media collages, etc.

All these experiences inexorably bring us back to the idea of an abode and transition, both tangible and impermanent, sensitive and delicate, immanent and transcending, a refuge and sacred hearth for the absolute and the timeless. Noorjehan has chosen to work from a natural material – paper – of which she says: “For me paper is like skin, it can be stained, pierced and molded, and it has the capability of breathing and aging. It has a fragility and resilience that has lasted through time.” Paper – Noorjehan knows all its secrets, its history, its geography, and its chemical composition. She uses all kinds: Indian paper made in Sanganer, a village near Jaipur, where the same family perpetuates teaching handed down from their 16th century ancestors in true respect of the values of ecology; paper from China, Nepal, Japan, and France. She first learns woodblock printing on cloth in Karachi; she then goes on to research the roots of Ajrak; and finally perfects her skills in indigo cultivation and dyeing in the studio of Jurgen Lehl in Tokyo and Ishigaki, Okinawa, in Japan in the early ‘80s. Form, colour, and surface are thus created in one breath, placing her work in a special type of temporality, with an aspect reminiscent of clay or wax, plaster and even lime, and giving rise as much to emotion than to a multiplicity of associations. Noorjehan once more reveals the nobility of her medium in its craft like quality, and in this light her works are akin to ancient writing tablets, gradually revealing the magic of its knowledge to anyone seeking it.

They seem to contain the seeds of Noorjehan’s entire formal and lived universe, if only through what their evocative titles express of an Earth-Heaven relationship: Tassawur-e-Neer. Noorjehan’s work is like an imprint in its capacity to unite both physical and emotional experience, to force us to rethink time models, to touch us by making us aware of the sacred places that we forget or destroy because of our ignorance. It is also like a matrix in its capacity to apprehend the world, reinstating or restoring, as it does, to our memories and our experiences of life, a place, a lost origin that is opened up in order to be transmitted endlessly, through the repetition of forms, within a sort of iconology that is perpetually moving, open and free. In this way, it restores, rhythmically, simply and effectively, contact with others, playing on the loss of contact as much as on the contact of loss, forcing us to rethink certain of our models by imprinting them repetitively in our minds in order to reconnect word and image with their fully sacred origins.

The symbol of imprint and matrix contained in her paper works series entitled, ‘Safar’ also become veil with its power to unveil the areas of shade and light as a principle of Unity of Being. For her, forms are substrates which entwine moment and eternity, and the place of memory. In her search for unity, Noorjehan explores darkness to an equal extent but matter and luminosity in these works are also exceptional. The exhibition, ‘Under The Molsri Tree’ seems to summarise the artist’s long journey through life in search of her relatives and the places that identify them, but this time without frontiers or borders whether north, south, east, or even west. Through this path she has found a way back home, this place of origin that is subject to much searching through life, and which is located neither in a specific space nor in a given time, but simply in one’s own centre of gravity, at the heart of Being.

These countless paths taken suddenly seem to bring Noorjehan into a vast space composed of multiple silences whose melody is a divinely resonant meditation, leading to the golden route of her labyrinth.

Excoriated by theologians, exalted by mystics, and exploited by artisans and artists, the numinous visual qualities of gold manifest in many of Noorjehan’s works are precisely those noted by Marx, for whom gold and silver appeared as “solidified light”, literally “raised from a subterranean world”. For the pious, this contrast between profane origins and numinous appearance raised questions about the perceptual qualities of mundane materials and their ability to either distract from contemplation of the divine or, alternatively, lead to knowledge of it, however partial. In short, the tension inherent in this paradox fostered debate about whether profane vision and its material objects could provide insights into higher truths. Among those who accepted the ability of mundane materials and quotidian experiences to evoke the transcendental were the Sufi mystics, to whose thought and symbolism light and illumination were often central. Serendipitously or not, these associations recall the links between architecture and memory in some of the earliest treatises on rhetoric, which recommend visualisation as an aide-memoire, urging the aspiring rhetorician to construct a mental memory palace, within whose arcades are visualised the data to be remembered.

Like the medieval memory palace, the repetition and replication of emblematic forms constructs complex modular grids, as if to consolidate the ephemeral, as if repetition crafts the stuff of memory, as works comprising ‘Safar’ are literally woven from a warp and weft of indigo-soaked paper. The medium of paper, at once the most ephemeral and malleable, is appropriate to the fragility of the endeavour.

The sentiment brings to mind a later poem of Jorge Luis Borges, ‘What Will Become of the Weary Traveller? In a poignant evocation of displacement, he wonders in which of his cities he will die. His conclusion echoes a well-known verse in the Qur’an (chapter 31:34), according to which no human being can know the land of his demise.

Both sentiments acknowledge the hankering after the unknowable that, like the evocation of the transcendental with mundane materials, or the attempt to weave ephemeral spaces of memory with fragile materials, is precisely the paradox of human existence itself – the paradox of a material existence that longs to surpass its limits, to loose its bonds, to lose itself in light.

‘Under the molsri tree’ by Noorjehan Bilgrami, curated by Maha Malik, ran at Koel Gallery from 29 January – 9 February, 2015. Images courtesy of the artist.

Aasim Akhtar is a visual artist, writer and curator. He lives and teaches in Islamabad.