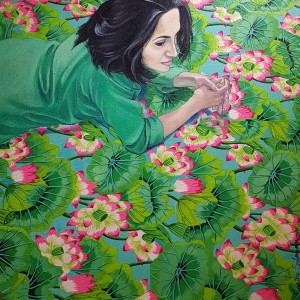 London has been a hub for both art and culture for many years, and the increased globalisation of the art world has amongst other benefits, led to the city playing host to an increasing number of international art fairs each year. These fairs provide a crucial platform for artists and galleries to introduce themselves to a wide range of markets within the art world, that may not necessarily be as accessible otherwise. In addition, the existence of these well curated spaces also encourages dialogue between a diverse array of audiences, helping build relationships between local communities and art. While there is much to say about the various artists and galleries on display, this review article hopes to briefly touch upon the representation of Pakistani art at recent art fairs.

Two phenomenal art fairs ran side by side this month, proving a great start to the new year! The 30th edition of the London Art Fair took place at the Business Design Centre in Islington between the 17th – 21st January, 2018. It is one of the city’s oldest and most celebrated art fairs, representing 131 galleries from across five continents. The Fair brings together leading Modern British and International galleries, and runs various specially curated programmes alongside the main fair such as, Art Projects and Photo50 that focus on the next generation of artists and collectives.

The most stimulating segment this year at the London Art Fair was the ‘Art Projects’ as it showcased an exceptional variety of some of ‘the freshest contemporary art across the world’. The ‘Dialogues’ section within the ‘Art Projects’ was titled ‘Future is Female’.  Curated by Misal Adnan Yildiz, it consisted of five pairs of UK-based and international galleries displaying works by women as a response to the current dynamics of female representation in the art market. Hanmi Gallery London responded with a particularly meaningful presentation titled ‘As an ontological reality: Image is Female’, with works by two well-renowned female artists, Aisha Abid Hussain and Yingmei Duan.  The gallery curated their stall in line with the artwork on display, building on the strong dialogue between the respective practices of the two artists.  Hussain’s strikingly powerful works, from her Two Not Together Series (2014), spoke volumes about the societal misconstructs around a patriarchal binary notion of gender that is ingrained in our culture. The rich spectrum of works in this section covered everything from gender politics and aesthetics, to the concrete and the abstract using a wide variety of mediums.

Also running simultaneously was the ArtRooms Fair, that took place between the 20th-22nd of January 2018 at the Melia White House Hotel, Regents Park. While the ArtRooms Fair has only been around for 4 years, their rather unique curatorial approach of displaying artwork in hotel rooms, made the fair a convivial experience. The fair was divided into regions – Middle East, UK, Europe, Americas and Australia, with on and off-site programmes such as the Satellite Programme, Art Projects and ArtRooms Interactive Projects. Furthermore, they brought together an eclectic selection of 70 contemporary artists from around the globe, and one region of particular interest was Pakistan, with a section of the fair programme being dedicated to contemporary Pakistani artists, titled ‘Focus on Pakistan’.

‘Focus on Pakistan’ was in a way the highlight of ArtRooms 2018 edition. This section of the fair was curated by our very own Zara Sajid and Zainab Omar of MyArtWorld, showcasing the latest artistic practice from the country. The fair opened with a display of the work of 20 established and emerging Pakistani artists, namely Amra Khan, Scheherzade Junejo, Sara Riaz Khan, Annem Zaidi, Ramzan Jafri, Summiya Jilani, Imran Kazmi, Kausar Iqbal, Haider Ali Akmal, Ujala Khan, Shiblee Munir, Tahira Noreen, Sachal Rizvi, Zafar Ali, Hajra Cheema, Omar Gilani, Mahnoor Hussain, Anam Rani, Saqiba Suleman, and Mohsin Sheikh. The work of some contemporary Pakistani artists was also on display in the Video Section of the fair – Samiha Khan, Hira Tahir Mirza and Farsam Zafar. Focus on Pakistan presented works with diverse artistic languages from around the country, from Amra Khan’s large scale provocative oil paintings to Ramzan Jafri’s painstakingly intricate mixed-media gouache on Wasli. In addition, Haider Ali Akmal, one of the 70 selected artists for the main fair this year, exhibited a rather subtle and sophisticated display of both etchings and charcoal drawings in one of the rooms under the Middle East section. ArtRooms London is traditionally designed as a fair for independent artists, providing visitors the opportunity to not only view art, but to also meet the artists on display, making this fair particularly special.

While both the Art Fairs ran with completely different dynamics, in terms of their venues and curatorial approaches, each offered a notable range of high-quality art from around the globe. The fairs cohesively showcased an exceptional variety of styles and media, reflecting on current trends in the international art market; ultimately gathering the core of the creative industries under one roof. It was truly heartening to see the representation of phenomenal contemporary art from Pakistan this year. One hopes to see similar representation in the years to come.

More information on all the participating artists mentioned above can be found here. You can also contact the galleries personally for more details