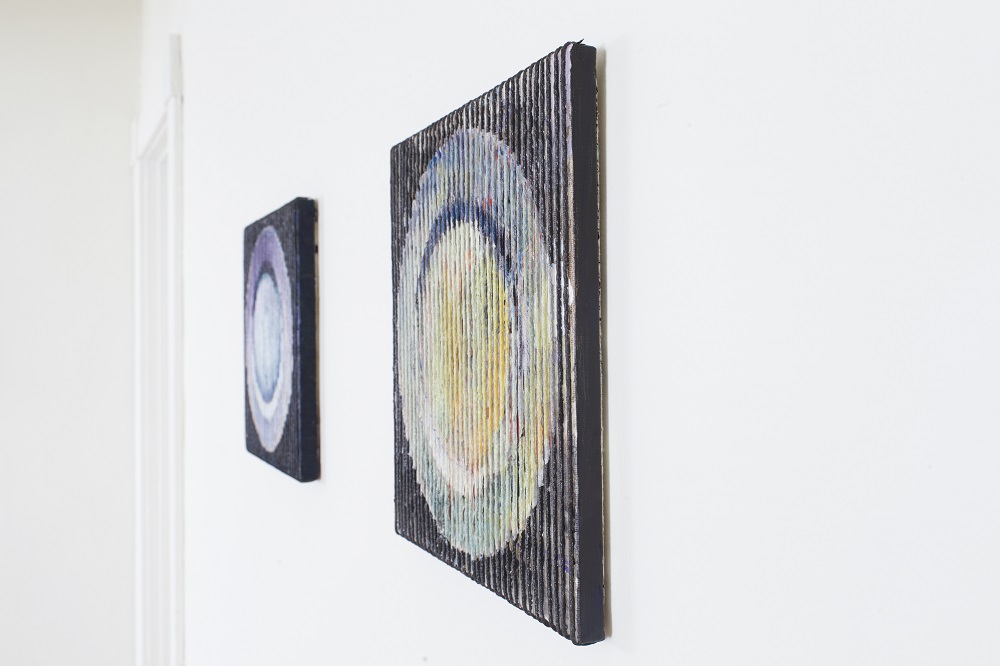 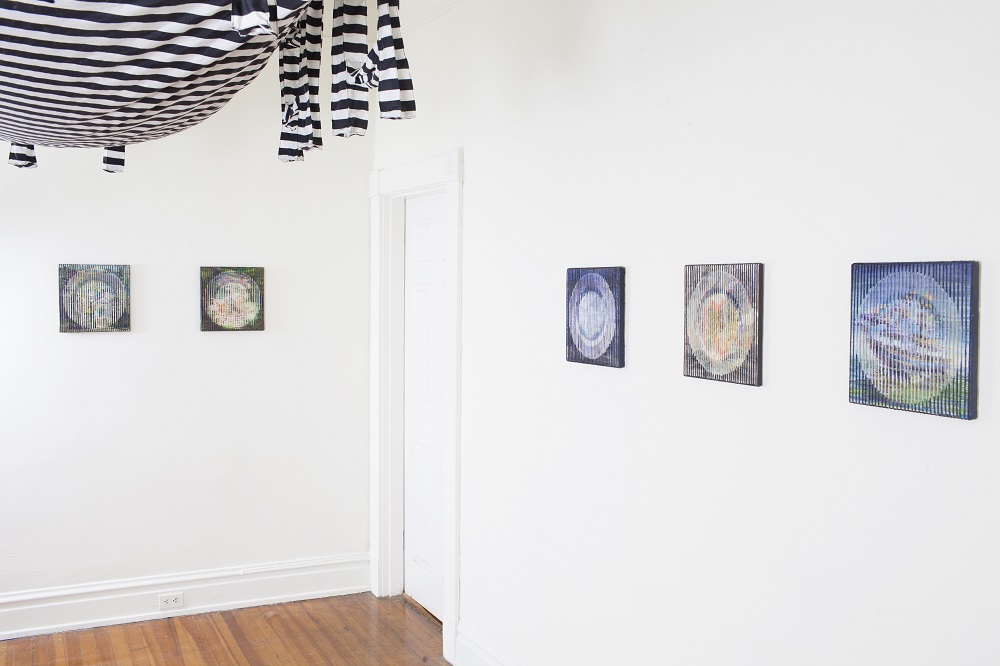 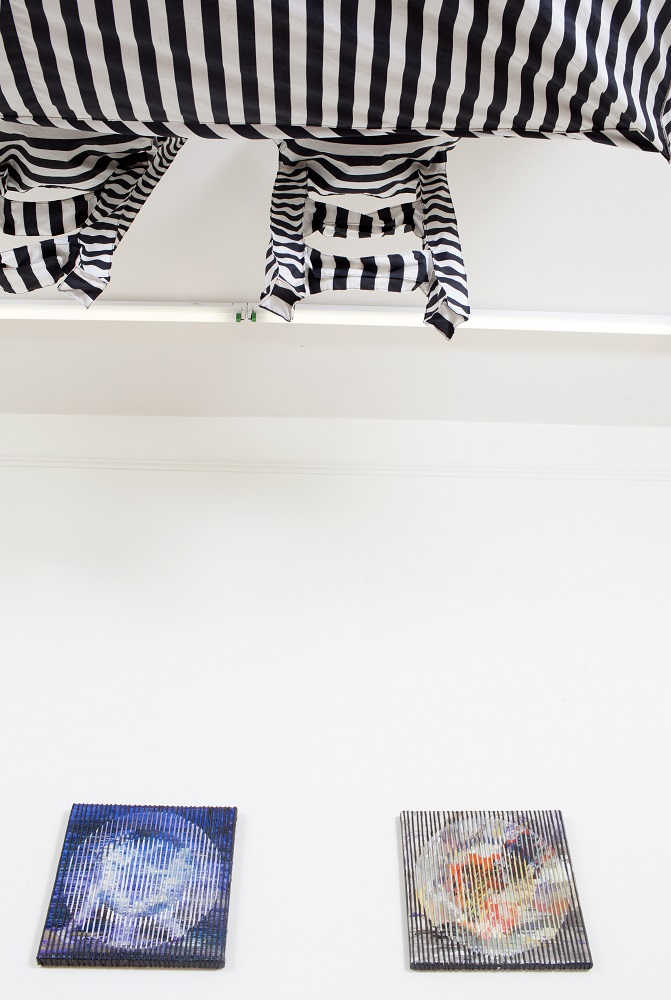 Dinner, the inaugural exhibition at Beauty & Truth, a new apartment gallery in Richmond, Virginia, plays on the quotidian function of the space’s previous life by setting up a scene that evokes a formal meal. The works that created this environment are Samina Iqbal’s and Ali Raza’s, two artists from Lahore who have been living and working together for over fifteen years. Iqbal, trained as a printmaker, has expanded her artistic repertoire over the years to include painting and fabric works. Dinner Time is a sculptural installation of parachute material, hung from the ceiling, upside down. The table and six chairs are, despite being true to size, uncanny due to the soft physical properties of the sagging, smooth striped fabric, as well as their unusual orientation. Made in response to Iqbal’s Dinner is Raza’s series of This is Not My Plate paintings. Raza, who has established a reputation both within and outside Pakistan as a painter, provides viewers multifaceted images. These works meld together the geometry of a plate and a seemingly random image by using a low-tech lenticular technique; he attached columns of thick string on the canvas, painting on and in between them. As a result, they shift from plate to image and back to plate depending on the viewer’s position in relationship to the painting. Iqbal’s installation and Raza’s works together engender an extraordinary setting for what could be seen as a dinner, a productive site for discourse.

The image in Raza’s paintings seen from an oblique angle is not that of food, to our surprise. Instead, an image of fire, fighting people, or a ship floats up from the plate that could be lying underneath. The strategy of juxtaposition comes from Raza’s experiences as a Pakistani living in the United States, dating back to when he first immigrated. An earlier group of works integrate two images, clashing with and confronting each other, and usually rooted in both his “homelands.” The works in this exhibition maintain the structure but their content has evolved in a manner that reflects the twenty-first century sensibility of “search.” Selected, often randomly, from the internet, the images are ostensibly unrelated to each other, and whether or not they are based in the reality is not important. Raza’s withholding of narrative leaves a viewer feeling uprooted.

In this dining room, one might ask where is the food and my place at the table? Yet, the paintings tell me, “this is not my plate.” In an attempt to find one’s place, the viewer moves from a ship struggling in the midst of an ocean gale to furious flame soaring up to the sky. He or she ends up being dislocated, wandering among the melancholic and dream-like images and longing for a je ne sais quoi. This sense of uprootedness is also underscored by the table and chairs of Iqbal’s Dinner Time. A viewer, standing on the ground, cannot sit on the chairs. Even if the furniture was returned to the ground, the chairs, empty inside, would not bear one’s weight. Furthermore, the fabric – originally intended for a parachute – is made to be lighter than any other cloth in order to carry a person, and let them drift down from the heavens. One cannot find a place at Dinner Time unless he or she was to overcome the insurmountable forces of gravity.

Let us postulate, for a brief moment, that one possible way would be to become a ghost. Indeed, the unstructured furniture and their gossamer materiality, as well as the shifting plates, and their fleeting images, suggest such an ephemeral being. All of these objects communicate a sense of lightness; they hover – they are phantasmal. Then, why is it that one cannot find a place in Dinner or elsewhere? Is it because a person, who moves between countries, consequently “loses” his or her homeland? Could this problem of dislocation be related to the question of family or society, which today is often explained in terms of crisis? If none of these provide a sound explanation, then, this exhibition could be understood as defaulting to the aesthetic aim that creates a flaneur-like sense of wandering.

Perhaps, another point of view could provide an answer to the question of dislocation proposed by Dinner. Nevertheless, my mind wanders back to the precariousness of taking a plate off the wall, pulling over a chair, and having dinner. All in all, the beauty and the truth, I dare to say, may only be captured in the moment of witnessing the ephemeral, in the estranged instance, that is to say, the experience of seeing the artworks.