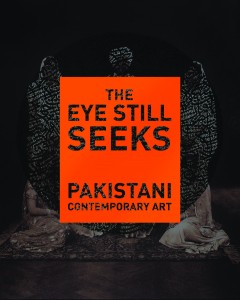 I am terribly excited as I write this review. I feel like I was picked out for a special mission, I feel like a large, red, important-looking circle was drawn around me and I am simmering inside it with glee and doubt (we all know how chosen ones suffer from this…at first). I was allowed access to a certain book more than a week before its launch at the Lahore Literary Festival 2015. In fact, I was graciously given one of its very first copies to read at my leisure and review. You must understand that books on Pakistani art usually do not get me this worked up. I am usually that person who shrugs and maybe sniffs once in boredom when such a book comes out and lets years pass before she comes across the same book for the umpteenth time at a flea market and then, only then, because the book seems certainly to be hounding her, picks it up with a long-suffering sigh and buys it and goes back home and stuffs it on the book shelf. I am that person. But this book on Pakistani art challenged my avowed disinterest in books on Pakistani art.

Now that I have you a little curious (I hope), I’ll tell you about this book. The Eye Still Seeks, by Salima Hashmi, is a collection of essays on contemporary art and artists from Pakistan. And, in addition to essays by some of our most revered artists and art critics themselves, or what we can call insiders’ reviews, it contains essays by three of our ablest writers. Writers have been known to stroll on long, dainty legs into the wild and brambly orchard that is art. At times, they have been scathing, like Charles Dickens on John Everett Millais’ Christ in the House of His Parents. At times, like E.M. Forster or A.S. Byatt, they are dreamy when they take in a work of art and its dreaminess simply adds to theirs and a world of soft words ensues. But it is always oddly satisfying, like a crunch or a crackle, to read what writers have to say about artists and their art.

The first essay in The Eye Still Seeks is Kamila Shamsie describing a body of work which lends itself very easily to poetry, if one has what it takes to poeticise images. She chooses to write about Naiza Khan – her engagement with the female figure, its trappings and semiotic baggage through the ages. I cannot eulogise this piece enough. Shamsie may have been the very person to lead one tenderly through work like Khan’s – somnambulistic yet immensely charged, like your average spiked dragon curled up asleep.

On Exhale, for example, Khan’s work from 2004, Shamsie writes: “A series of charcoal images of a woman, Exhale has the feel of a personal narrative, but the gauzy curtain-like fabric ending in labial folds which extends over the latter half of the drawing places the narrative in the realm of symbols and fantasy rather than the literal world.” Just that one gentle analogy is evident of how suited Shamsie’s sensitive reading is to work as quietly loaded with meaning as Khan’s.

The next artist the book centres on is Rashid Rana. I know what went through your mind right now. You love Rana and his at once weighty and playful work but you’re thinking – how can anything be possibly written about his work that is different from what we have already heard/read/watched in the last few years at one festival/lecture/launch/exhibition or another? The writer who debunks your rather absurd fears is Mohsin Hamid. Hamid’s essay, “A Film about a Conversation about Rashid Rana”, is an entirely brilliant piece of stream-of-consciousness. And who better to write about in such a way than Rana, an artist who arrays social stream-of-consciousness with streams of broadcast and downloads, singed with static? The dissembling, disassembling of Rana’s work finds unique expression in the mock-cheeky interior monologue employed by Hamid:

“Back to the film, or rather to the one among multiple versions of the film that is the one I have, and which sits open and paused on my computer in a window next to the window which contains the graphical user interface of the word processing software on which I am writing the essay that you are now reading.”

Mohammad Hanif tries to make sense of Asim Butt and of Karachi, the city that has in many ways become synonymous with Butt and his sad, grungy, subterranean art. Hanif whimsically pieces together snatches of surreal conversations with Butt, memories of train journeys, graffitied walls, strange meetings with an artist who lived in a tree and painted pavements and hubcaps. And somewhere in the back are bombings and sounds of riots as Butt’s Eject signs spread through the city. In Hanif’s powerful prose, Karachi becomes a mythological, dreamy city with conjurers and painted rocks and unexplained bits. Yet he does not attempt an apotheosis of Asim Butt. Butt remains only human, and all the more heroic because of that.

Hanif’s essay, “His Were the Streets”, is so poignantly, wittily, hauntingly written that it is difficult to choose just one passage or line to share with you. However, since I feel that I absolutely must, I’ll share a passage detailing his encounter with Ayub, the artist who lived in a tree:

“When I decided that I needed to ask him some questions about his wall and tree work, I thought I should visit him in the morning, have some questions ready, make it sound like work…I thought maybe I should take an offering of paints and brushes.

The Eye Still Seeks also features Aisha Khalid and Imran Qureshi in conversation with each other. And though their dialogue provides great insight into the lives, inspirations, and struggles of two of Pakistan’s most eminent artists, it could have followed a more captivating and fluid course. The two are a long-married couple and clearly have wonderful domestic and professional compatibility, and joie de vivre that reflects in both their practices, but their dialogue felt a little disjointed, a little forced.

Nazish Attaullah, in her essay on Anwar Saeed, pays beautiful tribute to one of our finest and most enigmatic painters. Through words she finds ways to capture the nocturnal blues and indigos of his reticent world. So many of my own questions about what I’ve always seen as Saeed’s pleasingly indecipherable imagery were answered by Attaullah’s hushed tiptoeing around it – answered, or misted further over, but isn’t that what wise people in tales often do, answer questions with mysterious statements until you begin to understand? It was a sort of Morse code springing from mystery and it was ideal for work like Saeed’s that really does not need decoding.

The final three essays in The Eye Still Seeks are by Quddus Mirza, Nafisa Rizvi, and Salima Hashmi. With characteristic good sense and clarity of expression, they offer summations and overviews, and closer looks at some other contemporary artists from Pakistan. Mirza, for example, discusses the oeuvre of Adeela Suleman. By writing about Suleman, Mirza honours artists from Pakistan who have been successful, while their contemporaries pirouette artistically into the open arms of labels and art movement names, at evading these very things through the eclecticism of their practices.

Salima Hashmi succinctly surveys a younger lot of artists, those who have taken to new media and new, or perhaps more modified, concerns. She ends with a slightly rueful account of how, at a presentation of a selection of Pakistani artists’ works to an international group of curators, “a deep sense of inadequacy overcame one. The number of artists being presented seemed niggardly”, she writes, “the scenario sketchy. It is a fact, not widely known, that the Pakistani contemporary practitioner is an unusually prolific species.”