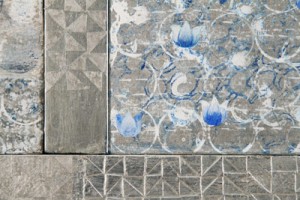 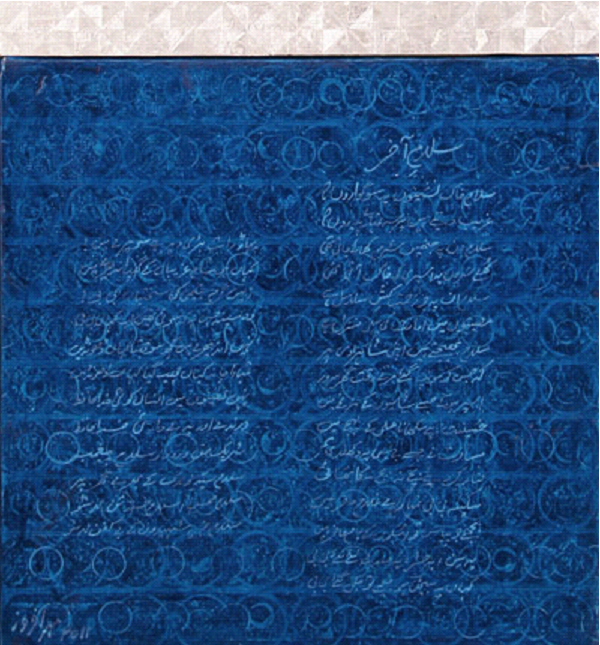 Meher Afroz’s solo show is an offering of tranquility in a madding universe. Exhibiting after a hiatus of four years, Afroz draws on the legacy of introspection and reverence to human values as determined by scripture and Sufi doctrine to present us with a personal manifesto of love, generosity and kindness in the hope that we will take out a little time to hear her message of love. Afroz’s work thus addresses not the viewer’s eyes, but the looker’s consciousness.

Afroz works her paintings around a fulcrum of traditional Islamic geometrical patterning that in itself signifies order and intellectual reasoning. The grid has been her companion for some years now, starting with her Gulistan Hamara series in which she uses the metaphor of the ‘Char Bagh’ or ‘heavenly garden’ to address concerns of political and humanistic mayhem. In her new works, the square is multiplied; as many as 2000 squares form the fundamental grid of one of the paintings but magically there is no tyrannical hegemony in the formation of the methodical frame and the work is grounded on the principle of order rather than stringency. But the grid is only one of the many layers that Afroz builds upon in her work. In fact the paintings are evenly and densely worked over and over and the strange luminosity that is achieved comes not from the gold and silver paint but from within the layers of contemplation that have been woven into the narrative.

The title of the exhibition Naqsh Bar-Aab, or images on water is redolent of the unseen element of water, not considered here in its physicality but its presence in the transcendental murmurings of the paintings. Afroz describes the work as being created and observed through the still waters of a pond where the image and the idea are both filtered through the lens of temporality.

There are two aspects of Afroz’s art; the formalism of the paintings, some large in scale, meticulously painted written over with text can be enjoyed on a visceral, visual level and can equally be pondered over for their metaphysical principles. The two drawings exhibited are equally nuanced and vibrant in their simplicity. They are illustrations of Saadi’s poems in which he draws our attention to the sacredness of the drying leaves and falling acorns and seeds in the autumn, reminding us that these will be the ushers and harbingers of spring in the coming months.

The text in Afroz’s paintings is as significant as the visual rendering of the idea. She doesn’t claim to have calligraphic ambitions; on the contrary, she writes the words in her own hand-written script like common text. However the words and phrases are anything but common. In one she writes “Hum is ki tasbih karte hain” or “We avow to this”, an open ended statement that encompasses a panoply of meanings and speaks of the readiness of people to make vows without understanding the code or inference of the belief and even without the willingness to abide by the oaths they take. In another, she writes the words Ishq, Ilm, Marfat, or Love, Knowledge and Understanding alluding to the importance of knowing and then loving –whether they be credos or people. In another tongue-in-cheek piece she writes the similar sounding words Dilkush, meaning beautiful or fascinating and Khudkush, meaning suicide.

The repetition with which Afroz scripts the text on to the image has significance too. The reiteration is akin to the repetition in Dhikr, the Sufi method of invocation in which the speaker repeats the name of God so many times that it resembles the process of habitual inhalation and exhalation of the breath.

No matter how transcendental Mehr Afroz’s imagery and metaphoric allusions are, she never strays far from her focus on humanity. She lives by the rules of her traditions that maintain the norms of civility, kindness, compassion and fraternity as guidelines to living, not just preaching. And these are the common but weighty values that she feels we, as a nation, are fast losing to what we call modernity.