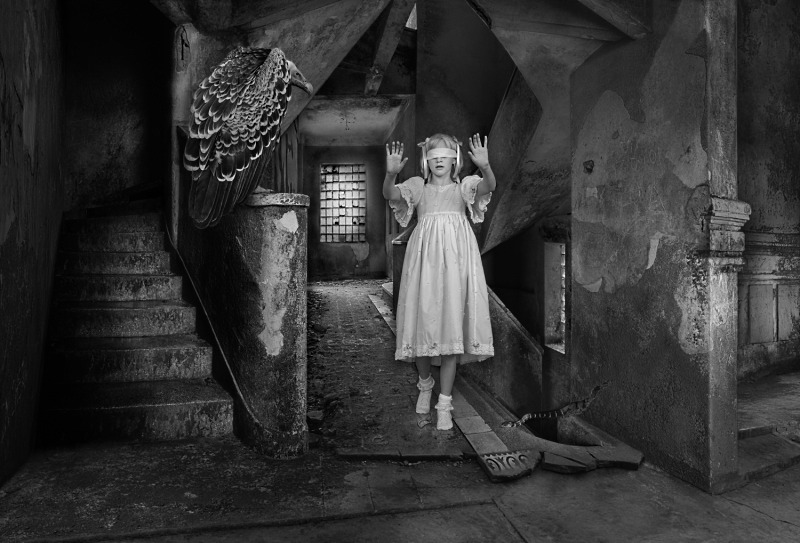 Dominic Rouse was born in England in 1959. His career began in photojournalism in 1977 and has progressed through various stages into the world of fin

Dominic Rouse was born in England in 1959. His career began in photojournalism in 1977 and has progressed through various stages into the world of fine art.

He makes toned silver gelatin prints from digitally composed, plate negatives in short limited editions. His later work has received international recognition and has been published and exhibited across the European community as well as in North and South America, Asia and Australia.

The style of his imagery may appear to be rooted in the past but it relies heavily on a fusion of state-of-the-art digital technologies & traditional photographic processes to produce prints that have been described as “digital antiques”; seamless transitions between the world of contemporary digital art and the timeless qualities of large-format black and white photography.

“Life can be likened to a movie shown only once to a captive audience of one, a darkened auditorium in which the level of illumination is a decision for the solitary occupant. To see the light we must first acknowledge that we are in the dark.

I am attempting – as much as is humanly possible – to distance myself from all humanity except my own. Religion is the smokescreen that obfuscates the sins of the rich and mankind is the prison in which the inmates have been convinced that they are free. Our gaolers are troubled by their own shallows – the fears they have of others are the fears they have about themselves cunningly repackaged to increase their legal appeal.

Unless the truth be sinful, it should not be possible to find fault with a man who views the world through a camera’s lens though it is equally impossible in any given age to create work which is agreeable to everyone. Art often challenges existing assumptions rather than simply accommodating them; it is beyond good and evil, which are not the antitheses, but degrees of each other. I suspect that evil may not exist at all, at least not in the form in which it is presented to us, though there can be little closer to it than the hypocrisies of men and women who claim goodness for themselves. Morality is a disease peculiar to humans and at its worst human life is not tragic but unmeaning.

Art is not made by men and women who are wise, but by those in search of wisdom and to search at all is wisdom enough. Knowledge of ourselves is the most that we can know.

And saying so to some means nothing; others it leaves nothing to be said.”