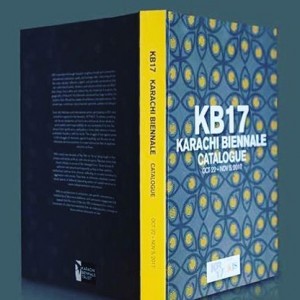 The remarkable success of Karachi Biennale 17, is repeated, again, in the form of its catalogue, because as the event took place two years ago, and for a duration of 15 days, its salient features may have faded in the memory of general public as well as among art crowd. The publication of catalogue KB17 brings back – not only memories, but aspects which were overlooked, not noticed and missed, in the first place.

It is significant for another reason too. Particularly in the context of Pakistani art, where art making is perceived to be a prime and prize activity, compared to its documentation; to the extent that one still had to go through hurdles and hazards finding out titles, mediums, years – and even names on some of the works in our public collections – or at private spaces. One could say that for a society, more than five thousand years old, the matter of marking one year or month is a trivial indulgence.

However, the catalogue will continue to keep KB 17 alive, especially through its beautifully designed, and elegantly produced format. Its physical layout competes with any respectable publication around the world. Thus, looking at, and leafing through this valuable document, one feels ‘we are also worthy of art’.

Texts included in the volume add to this view. In the introduction by Amin Gulgee, the Chief Curator of KB 17, one gets to know the background of his and his team’s untiring work, and relentless efforts: “My team and I then worked with each artist over a period of a year to clarify their respective visions”. He also talks about the theme of KB 17: “When confronted by the theme for the Karachi Biennale 2017 (KB17) – Witness – the much-quoted Chinese curse, ‘May you live in interesting times’ comes to mind”. It is uncanny that while choosing this theme (and with its connection to Chinese line) Gulgee could not have imagined that the same curse, would turn into another theme, for another – and much visible biennale of the world; the Venice Biennale 2019.

The Curator confesses that “The works commissioned and selected for KB17 bore witness in many ways. For some of the artists, the act was personal. The witnessed their own journeys, their memories of family and childhood, experiences of loss, their connections to the sacred, to tradition, and to their bodies and selves. For others, Karachi itself became a point of departure that led them to witness the trauma of violence, as well as the challenges presented by urban decay, the beleaguered intellectual space, barriers, migration, change, and territory.” This diversity is evident in the works and artists presented in the catalogue, as moving from one page to next – much like stepping from one display area into anther, one is amazed and impressed by the ingenuity of the curator and his team, being able to invite and house artists as varied backgrounds, practices, and positions as Yoko Ono and Ali Azmat.

If one compares recently printed catalogue with the exhibition held two years ago, one comes to several conclusions. One always assumes that artworks are permanent in relation to words written about them, yet reality offers an opposite scenario: Physical pieces were installed, but removed and dismantled after the exhibition was over, these were witnessed by those who managed to visit 7 venues of the biennale; whereas text about those works collected in the catalogue will stay for a longer period and to a wider audience – across time and place.

Carefully chosen texts highlight biographical details of all participants, besides sufficing their views on art, about their works and world in general. Since majority of artists dealt with issues beyond the comfortable confines of art-world. Artists’ words along with their works present the process of creativity, which is witnessed by a reader – but the crucial question arises, that when we read a text about another human being, about her experiences, her joys, her success, or her failures, can we witness? Or even if we are seeing it happening right in front of our eyes, can we still witness them? Pertinent questions invoked by Zarmeene Shah in her wonderful essay (The City as Witness: Ways of Speaking, Seeing, and Being Seen), when she mentions views on witness by different writers and thinkers. “Elie Wiesel evoked the poet Paul Celan when he asked the question: who will bear witness for the witness?”, and “Giorgio Agambeen speaks of the idea of testimony in a similar way, when he cites Primo Levi as the ‘perfect example of a witness’, ‘(But) Levi does not consider himself a writer; he becomes a writer so that he can bear witness”.

Another witness is evident through the catalogue: During the Karachi Biennale 17 works of diverse scales were displayed at various venues, but putting them inside the pages makes them equal in terms of size, importance and material. A great feat of democratization of differences in art, one must witness.