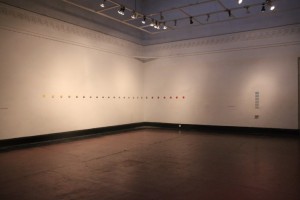 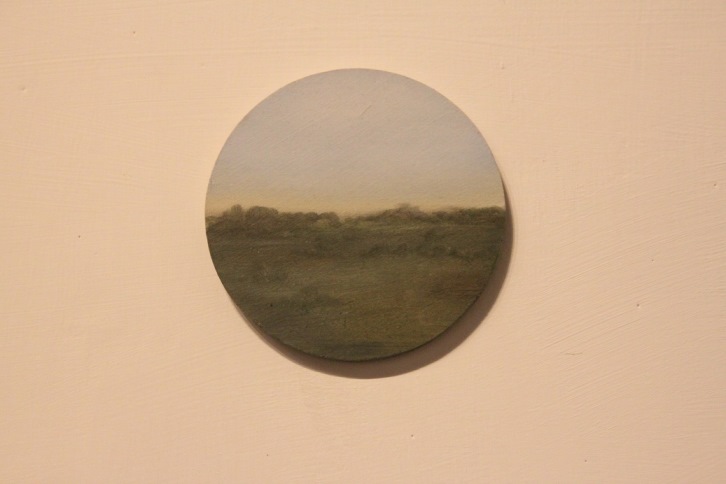 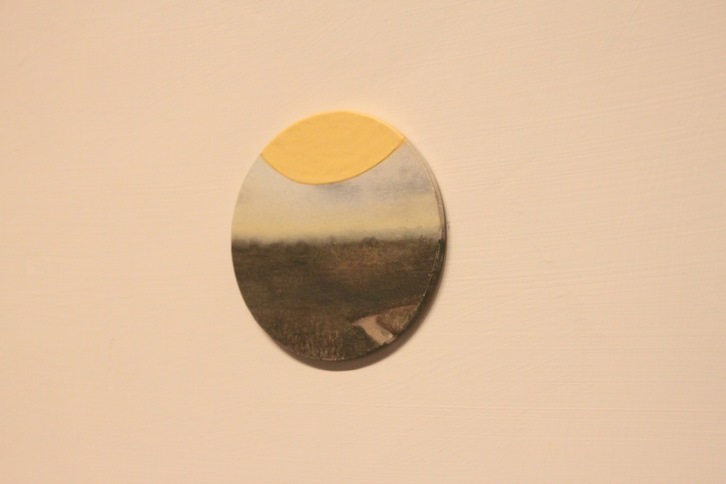 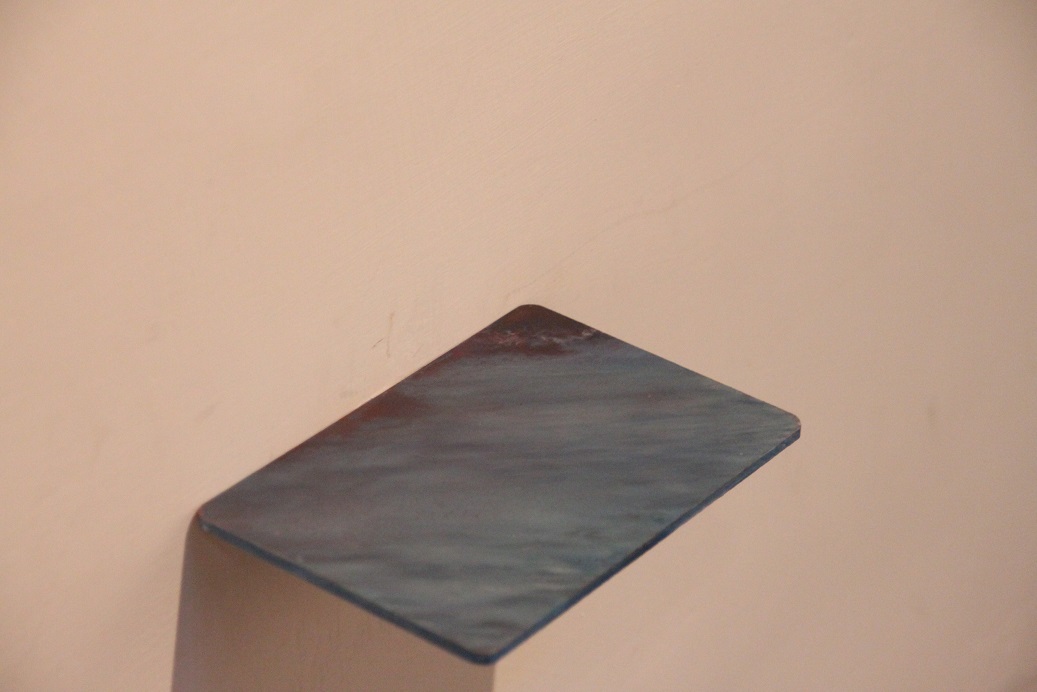 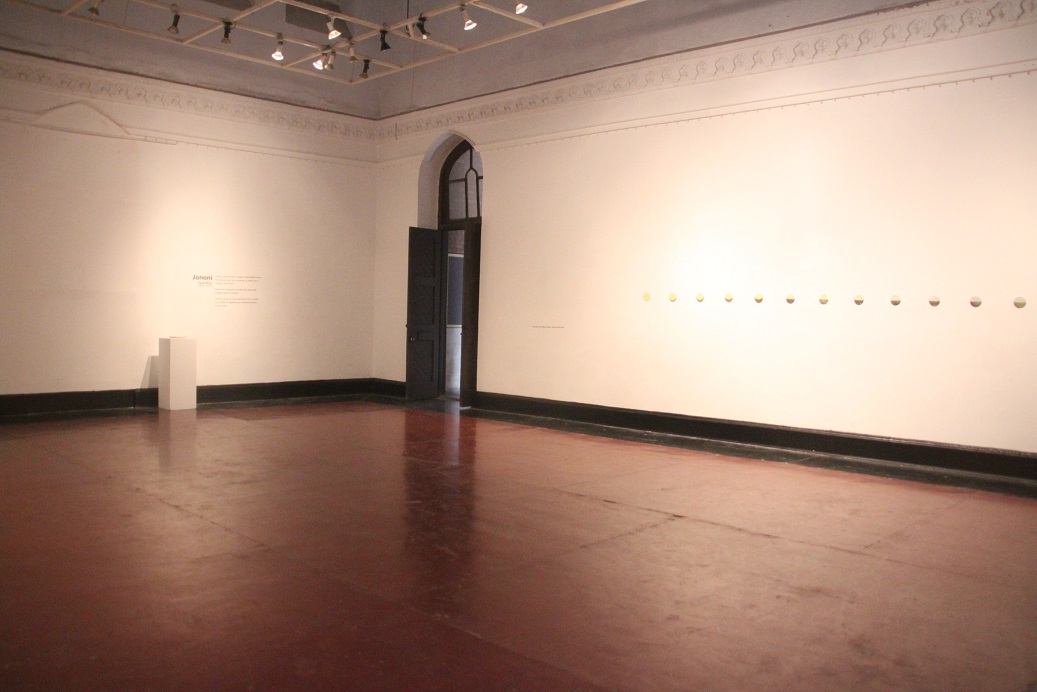 In his solo show held at the Zahoor-ul-Akhlaq gallery, Fazal Rizvi picks at the seams of his relationship with his mother and uses this story as a foundation to further comment on loss and issues of belonging in a more collective context. Therefore, the title of the show ‘Jononi’ carries a two tiered meaning: it is literally translated as ‘mother’ in Bengali but is metaphorically also used to mean ‘homeland’.  The use of Bengali is significant for Rizvi because his mother had to migrate from present day Bangladesh to Pakistan as a very young child when faced with unrest prior to 1971.

Upon entering the gallery, one comes across a stack of flimsy paper upon a pedestal each leaf of which is printed with a description of the show in a manner more subtle than the one employed above:

A tryst
A collision

By metaphorically likening his mother and himself to two suns, Rizvi creates a paradox whereby a sun is indivisible and pivotal but also multiple and in another’s orbit – derivative. This paradox challenges a truism, thereby casting an uncertainty over the work as is manifested in its part fictitious part factual nature.

This sense of uncertainty continues into the work titled ‘The sun that rises is never the sun that sets’. How can it not be the same, one wonders at first only to be reminded that after the inevitable passage of in.between time how can it ever really be? Each day is therefore, just that in isolation. Time is not molten. This work is set of twenty four circles of board each of which is painted with a fuzzy landscape in soft light. A creamy enamel sun in yellow rises from nine of these at one end and having cleared the view for five disks a similarly thick red sun descends on the rest of the nine discs. Not only does this arrangement signal at a critical rift between the two similar forms but perhaps this also refers to the climax in the 1971 conflict between what is now Bangladesh and what was then West Pakistan. This difference between now and then is the proverbial shift of the day. Would it really change the character of the land if we call it this today and that tomorrow? However abstracted this difference may seem in theory the scars of the conflict were borne by real people one of which was Rizvi’s mother.

On another wall, a set of thin fragile papers are pasted in a work titled ‘These are not love letters (on separation)’.  It is easy to imagine them as unsent letters. That, however, may be an error because the letters are indeed sent to you and I, the viewers, despite being addressed to Rizvi’s mother. While on the one hand they are frank about matters that Rizvi would perhaps be reserved about if his mother was really meant to read them, on the other hand, they are not entirely unaffected as they respond to the expectations of their occupied space in a gallery and their anticipated readers. This is evident, particularly, from Rizvi’s visual treatment of the text. The content of the letters revolves around clashing ideas of love and estrangement. It is also apparent that as these two characters are cleaved down the middle, the writer of the letters sees himself as both the victim and the perpetrator. Partly, these texts are a note to his self.

‘Two monologues do not make a dialogue’, Rizvi writes in his letters. Except when they do as is the case in his video installation titled ‘Let’s Watch the Sunset.’
‘Together?’

Projected onto a loosely hanging cloth, this video has a subtitled conversation running between two characters over scenes of the seaside and the roar of waves. However only the script of one character is legible at a time since that of the other is set as a mirror image which has to be read from the back. Comprehension, thus, becomes fragmented and myopic much in line with the content of the conversation itself. The two characters are consciously attempting to provide company for each other and failing at just that almost as if they could not help themselves. The sudden emergence of two suns in the sky grabs their attention and leads to a dialogue from which it seems apparent that one character (presumably the child) resents the other (presumably the mother) for not being able to remember the details of events in her childhood (presumably a reference to the 1971 conflict). Memory, as slippery a debt as it may be, is something we owe to tragedy at a collective level. The fact that Rizvi’s character bemoans its loss for an individual seems to be an unarticulated attempt on his part to share the other’s status as the wronged one. If only you could remember what it was like for you, perhaps you’d understand what it is like for me. And because she cannot or will not remember, separation is inevitable and he walks away. The projection of this video upon loose cloth adds an ephemeral quality to these shifting images much like that of a setting sun

‘Who doesn’t desire his father’s death?’ Dostoevsky’s character Ivan Karamazov famously asked. Modify that slightly and apply it to an abstracted idea of the Mother instead of the person and Rizvi may have to agree. By making this work, this is perhaps exactly the desire that he fulfils: when you articulate something, however weak it may be, in a way you set it in stone. If you find a word or an image for ‘it’, the word or image have no choice but to become ‘it’. Representation by its association to the real has the power to supersede the real in memory and in conviction. This becomes all the more likely if the represented has no agency in the process as in the case of Rizvi’s mother. Rizvi kills her and births her again as he deems fit. One cannot of course simplistically conclude this is manipulative or we’d have to similarly dismiss most literature and art. The clichéd euphemism often in use is the word ‘inspired’ but it really doesn’t carry the uneasy connotations of being the protagonist in another’s expression.

One wonders how long Rizvi can continue to weave this narrative without the knowledge and attention of his mother and what would happen when she stumbles across this expression in its entirety. This is particularly interesting because while most artists are actively concerned about widening the viewership of their works, Rizvi’s works exists precisely because it is so scantily viewed within this introverted circle. The story, however, still lies beyond the terribly white walls of an art gallery