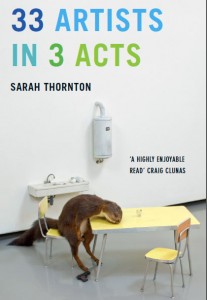 The title of Sarah Thornton’s second book on (or exposé of) the art world – 33 Artists in 3 Acts – itself gives away the dissembling that is at the heart of the art world. It features, as the title reports, 33 artists in a set of ‘acts’. The theatricality that underpins the goings-on of the contemporary art industry is very deliberately invoked by Thornton through the use of the word ‘act’. Theatre, masquerade, performance (and not the kind that has carved out a genre for itself in contemporary art) is a real and preponderant requisite to making it as an artist, or so Thornton sets out to illustrate in her funny, engaging, and astutely observed follow-up to Seven Days in the Art World.

“Ironically, being an artist has become a craft,” Thornton declares right at the start, holding Marcel Duchamp culpable for this surprising twist in the history of art. In favouring the readymade over the handmade, the original trickster figure of art, Duchamp, “began crafting identities as well as ideas”, changing forever what it meant to be an artist. Now, writes Thornton, “[like] the size and composition of a work, the walk and talk of an artist has to persuade, not just others but the performers themselves.” This is why she sees artists’ studios as “private stages for the daily rehearsal of self-belief.” The smoother these rehearsals, the stronger the artists’ convictions in their carefully constructed identities, and the greater the credibility of their art and their careers. And it is credibility, not money, that is, according to Thornton, the “chief currency of the art world”.

Thornton does not hesitate to call the art world out on its intricate duplicities and apparently odd codes and commandments. She points out, for instance, in her picaresque, fast-moving introduction to the book, the great pains taken by artists today to ensure that they are never categorised as ‘commercial’ (when the hyper-globalised art market is primarily held together by money). She also observes how emotion and angst are no longer considered desirable characteristics of art (a strain of thought that is later echoed by Lena Dunham, one of the 33 artists interviewed by Thornton, when she ruminates on her artistic lineage and the importance of a methodical route to art – “My parents taught me that you can have a creative approach to thinking that is almost scientific… You don’t have to be at the mercy of the muse. You need your own internalised thinking process that you can perform again and again”).

In 33 Artists in 3 Acts, the objectivity of a sociologist and the understanding of an art writer who has spent a lot of time in the society of artists combine to deliver an analytical yet playful look at the art world. Thornton, despite quite possibly being jaded (for this book, alone, she travelled to artists’ studios around the globe and interviewed 130 artists, of whom 33 were ultimately cast in her play), manages to retain and convey a marked interest in the behaviour of this social group. The three ‘acts’, titled “Politics”, “Kinship”, and “Craft”, each contain within them more than a dozen ‘scenes’, or encounters between Thornton and an artist (in some cases, artists). Moreover, in the spirit of theatre, the encounters overlap, or precede and succeed each other pointedly. Jeff Koons makes his exit and Ai Weiwei enters. Carroll Dunham refers dismissively to Koons in his scene with Thornton and Zeng Fanzhi lightly praises Ai Weiwei in his. The relationships artists have with each other are clearly important to Thornton, and Act ll – “Kinship” – is a testimony to that.

For anyone wanting to know more about the art world, whether they are ‘insiders’ or curious, bemused onlookers, the book offers troves of details ranging from the desultory (Francis Alÿs’s choice for lunch) to the meaningful (Cindy Sherman’s aversion to delegating work or being seen working), from the serious (Yayoi Kusama’s obsession with dots) to the amusing (Maurizio Cattelan’s penchant for designing his own t-shirts, with captions like “Who is Bruce Springsteen? Not the boss of me”). But, unlike traditional drama deriving from the Greek model, there is no crux, no build-up to a monumental argument or theme. Instead, the characters evasively shuffle on and off, intermittently dropping hints about their practices or their rivals, betraying a lot more through their habits and their actions. But this semi-absurd, cloistered world is what the contemporary art sphere has become, as Sarah Thornton’s play in 3 acts shows.