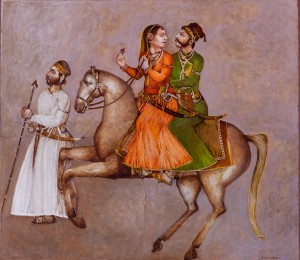 Homecoming- A Painter Between Worlds

‘Najmi Sura’s fascination with and interest in the painterly pursuits of the much older Naqsh completed the ingredients of a chemistry that was to infuse both their life and art.’[1]

Sura started painting in the early 1970’s under the tutelage of Jamil Naqsh. However, it was the 80’s that saw the emerging of a figurative art painter in Najmi Sura, who now confidently stepped out of the shadows of Jamil Naqsh’s distinct style to establish her own trademark. With no formal training, and with the continued support of Naqsh, she began to draw inspiration from Jain and Rajasthani album paintings[2] of the fifteenth and sixteenth centuries; an amalgam of indigenous art traditions of the Marwar- Mewar region, Ajanta and Gujrat.

Sura’s art expounds a contemporary response to the complex cultural history without separating herself from the cultural tradition that has cultivated and nurtured her art. In so doing she institutes a relationship with the neoteric world that surrounds her. The combination of being a Pakistani painter who now lives in London and follows the visual conventions of Mughal and Rajput miniature art became the stimulus behind the title of her homecoming exhibition.

On December 23, 2017 Karachi witnessed the homecoming of Najmi Sura’s masterworks with sixty four paintings displayed under one roof for the very first time. While the artist has displayed her work in group exhibitions in London, ‘A Painter between Worlds’, was an exclusive solo exhibition held at Momart Gallery. The exhibition which continued for two days was a showcasing of paintings done by the artist throughout her life thereby drawing art enthusiasts and connoisseurs to the gallery.

Over the course of almost four decades what has evolved, and remained unswerving, is the artist’s fascination with the traditional Indo-Persian rendition of courtly figures. However, she shifts focus through the female form, which almost irrevocably has a strong and irrepressible presence in Sura’s paintings. The execution of her women is reminiscent of Ajanta art- sturdily built and voluptuous unlike the women in miniature paintings from which the artist primarily draws inspiration from. Full-bodied yet disproportionate figures are characteristic of the artist’s style.

Najmi Sura’s impression of the female form is then further brought to life by the treatment of the figure in the old tradition of miniature painting. The intricate jewellery adorning the carnal form, the glossy dark hair cascading around the delicate features, careful details of the soft, rich and flowing materials of her dress are meticulously and exquisitely rendered often in strong contrast to the treatment of the background, where she uses free, yet decidedly controlled, brushworks to create a textured effect. Bold contours, subtle yet emotionally stirred expressions and sharp features lend a stately presence to her women. Opulent decorative borders with no shrivelling in the elegance and extravagance frame the central image.

Adept in the traditional colour palette the basic bright colours are marginally toned down to reduce their brilliance. Working with inks, oil paints or water-colours, detailed and meticulous strokes and subtle shading further corroborate the artist as a devotee to the traditional Indo-Persian style maintaining high command over the medium. The maturity of form continues to be dictated by the purity of the unbroken, all-encompassing lines rendered with pen or brush.

While in conversation with Marjorie Husain the artist, who has also been awarded the Tamgha-i-Imtiaz[3] for her contribution to Pakistani art, specified

‘There are three things that Jamil taught me- not to give interviews, not to hold exhibitions, and not to copy Chughtai.’[4]

Sura proved to be consistent with Naqsh’s advice of staying clear from being branded as a Chughtai charlatan despite being wrongly accused by critics who often suggest her work being more ornamentally inclined towards Chughtai’s style.

Though Najmi Sura’s artwork is largely seeped in a woman-centric theme with a profound personal approach to technique and style it appears to be limited to an undeviating discourse with the miniaturist tradition rather than a dialogue shaped from deep personal conversations.

However, what does come across quite strongly is the similarity evident between the artist and her women- both are inconspicuously self-assured, powerful and in control.

[2] A painting format in East Asian Art comprising small scale paintings and calligraphy mounted onto individual pages assembled as what appeared to be books and viewed from the right cover to the left.