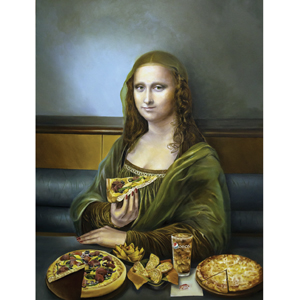 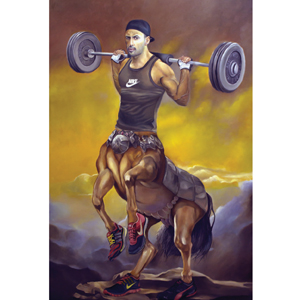 In his new body of work, Muhammad Ali raises a humorously haunting mirror to us to acknowledge how predominant consumerism has become in our day to day life.
Bold in his imagery, The Emperor’s Real Clothes makes the viewer witness the various tactics that are employed by corporations to manipulate their consumers.
The tactic of branding is very poignant in his work; the process of taking something and contextualising it to give it the right appeal – to the right target market. I’d Like To Fly, But My Wings Have Been So Denied showcases the Redbull slogan ‘Redbull gives you wings’, but the painting reveals a horse ready to soar, but possibly never will. The woman appears to be of South Asian descent, coupled with the peacock feathers, placing her further and further into our locale. The tragedy is, we’ve all heard of it and we’ve all crammed studies with cans of Redbull to keep us going, despite the crash that comes after flying for too long.
Muhammad Ali also discusses how insecurities are targeted when trying to sell a product. In ‘Do You Even Lift Bro’, we see a man lifting weights wearing Nike Shoes. ‘I wish I was strong like him’, we think. ‘Maybe I could be if I wear the right kind of shoes’, we conclude.
‘In Sweet Child O’ Mine’ and ‘OOPS! Did I Buy Champagne Instead of Milk Again’, domestic issues are addressed, with the need to pacify them. Is your child and his mess the bane of your existence? Luckily you can have rubber gloves and the right kind of solvent to clean up his mess, after, of course, a glass of champagne to calm your nerves.
Need a little excitement in your life? In ‘Before He Wakes’, that one ice-cream you sneak in between your chores can instantly make your mundane life more entertaining.
Not only are such insecurities being picked at, there are familiar faces that parade the paintings, just like celebrities endorse products, making them all the more desirable. ‘A Moment on the Lips’ stars Mona Lisa, caught in the midst of unapologetically enjoying a hefty meal all by herself at Pizza Hut. Is the painting saying that that’s the reason behind her smile? No, of course not. But it didn’t need to, because you’ve subconsciously already made that association and probably figuring out how soon you, too, can indulge in that fulfilling meal; obviously sloshed down by a glass of pepsi, because, that’s the binding force behind the food, my craving and my happiness.
How does Jinnah look like such a stud in his photographs? It’s probably his new iPhone with the front flash. Maybe if you had that you, too, could look just as good, and, while you’re at it, possibly be the next President of Pakistan.
Vermeer’s iconic model clearly didn’t fashion just the pearl earring; no, now she’s a south Asian bride modelling clothes as heavy as her jewellery – that’s the secret to looking good on your wedding.
Do any of the aforementioned notions/implications make sense? No, but they don’t need to. Because your attention has been caught and now you want something that you never needed, neither wanted before you saw it handed to you on a silver platter as the answer to your woes and secret behind your happiness.
But don’t mistake Muhammad Ali’s work as just a comment on branding and consumerism. It poses serious questions regarding our own mentality. We allow such notions to infiltrate our judgement, we give precedence and give in to things depending on what or who they’re associated to. Muhammad Ali, quite literally, paints how much we are letting other forces take over our minds and our decisions.
Ali beautifully renders our harsh reality through fresh pigments of oil on large scales so we, quite literally, stand face to face with a haunting reality that we have lived with long enough to ignore.
Is there an answer to this ailment? Not really. But the first step to any change is accepting The Emperor’s Real Clothes.