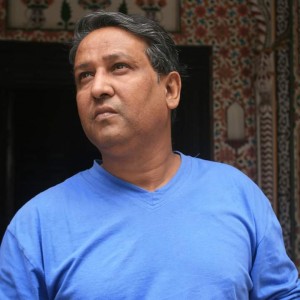 Abid Hasan’s exhibition titled, “Scintillating Allegories”, opened at Gallery 6 Islamabad this February, comprises of 28 paintings and collages. According to Hassan, there are many angles to look at art as it takes whichever direction and meaning one wants it to take – universal yet intimate, collective however personal. That indeed is the power of Hassan’s art and while his creativity on display at the current exhibition stems from his personal fascination with what lies in the underbelly of the planet earth, the visuals he carves provide insights into physical and metaphysical worlds for his viewers, depending on their own perspective.

Hassan started evolving his artistic expression while he was assisting Professor Ahmed Khan who worked with metal leaf on canvas to create vivid calligraphic pieces. Hassan then went on to study art and graduated from Karachi School of Art in 1996. ‘Scintillating Allegories’ is his eleventh solo show and like his mentor, Hassan also chose the technique of chemically treating gold or silver leaf, letting it weather with different keys, inducements and exposures – finally coating the metals with oil colors in different hues till this natural evolution process reveals a visual just as precious as the deepest cores of mother earth itself.

Gilding is an art technique used since medi­aeval times when gold leafing was used to embellish picture frames. During the renaissance era, artists started using gold beaten into a thin leaf when paint­ing halos, pinnacles, thrones, and opulence. Surfaces were treat­ed to accommodate gold foil and it was further gleamed as per artist’s requirements. Miniaturists and calligraphists have also used gold leafing techniques to depict the magnificence of royalty and consecrate. In modern art, gold is continually used to create an impact and Pakistani artists such as Ismail Gulgee, Ahmed Khan, Abid Hasan, Komail Aijazuddin, Ali Asad Naqvi, Saeed Ghani, Sana Navid, and Sumaira Tazeen have used it in their work to communicate diverse connotations.

Discussing this current series on display, Hassan ruminates, “In this series I am experimenting with different intensities, types of leaf and exposures to natural elements. This has brought a new look to my artworks. I try to discover a new dimension in every series. Some of my previous artworks vividly resembled interior earth structures and that inspired me to create this current series solely dedicated to the landscapes within the Earth.”

With ‘Scintillating Allegories’, Hassan has perfected this intuitive expression and reverberates his subject in some very arresting images. We see deep red oil spills circling gilded benthic forms, coalesced foliage percolate through the porosity and permeability of cobalt rocks, crystallized salt self-arranging itself in rows after rows, and exquisite. Large pieces with titles such as, Seismic Dance, From the Ordovician Period, Per Mineralization, and Ultrafamic Rocks tell stories that need to be told but remain undisclosed within the mantle core of the globe. The resulting mixed media paintings have a brilliance and tactile quality rarely found in abstract expression.

Hassan’s canvases have obviously been through an organic journey of their own and considering the subject matter, there is but no other way for them to have developed. His colours are all taken from the inner deposits of tera firma but with a fascination that is only blessed upon an artist. In his quest to explore these hidden meanings of petrified nature, Hassan’s canvases are almost as real as actual seismographic section studies with P and S waves adorning some and from within those waves fossilized imprints emerge in colours as striking as ambers, emeralds and azures. Hassan continues to explore the secrets of this alternate reality on canvas after canvas that the nature scientists has yet to unearth in its full glory. The spectator is left awe inspired looking at these illusory yet almost scientific depictions of unknown dimensions perhaps not even yet known to metallurgists, mineralogists, and paleontologists. Through warm pink and organic tones, Hassan aesthetically pleasing configurations with a unique empathy as he believes that not just the exterior but the interior of the world has a meaning waiting to be reconnoitered.

“Beyond science and technology, in the seismographs of imagination lie reasons for another world that we live on top of, a parallel ecosystem that we are discovering by the day. With imperfectly perfect layers of rock, water, precious and semi-precious minerals, and a whole new world of species and materials, the inside of the earth we live on is being explored. Like the layers of an onion, the inside of the earth is layered extensively and separately, yet every layer diffuses within the other. I believe that there are many meanings and allusions in this to ponder about,” he explains.

The fascination with which Hassan has put together ‘Scintillating Allegories’ is a befitting homage to the astounding bounties our magna mater has to offer us. The connection the viewer establishes with the pieces on display at this exhibition is a testimony to our need to connect with the inner core in order to complete our own somatic and mystical crux. Just like a journey within a person’s inner self, a voyage within the planet we live on can be sufficient to explore our potential and the extent to which we are self-reliant and self-sustaining and yet deeply connected to our universe. With Scintillating Allegories, Abid Hasan has unraveled a new dimension and we would be curious to see which trajectory his quest for the unknown takes next.