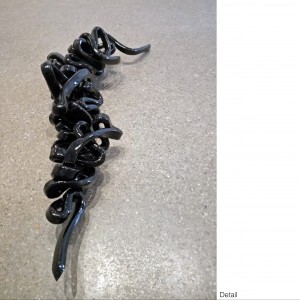 Modern Sculpture is defined by the rejection of the idealistic representative form, and moves further and further away from it not just in terms of visuals, but also content, concepts, themes, and essence. Traditional mediums and materials and exchanged for industrial and consumerist ones and a larger focus is put upon form, volume, and space. The resulting works become more minimalistic and abstracted, subverting ideas of 3d art forms while at the same time encapsulating its core principles.

The art of Umar Nawaz is of a similar nature, with a keen focus on form and an engagement with the material. For Nawaz it is the process and the material that are key which in a way reverses the artistic process for him – the material and its handling determines the final visual outcome, not the other way around. The purpose of the works is to play with the form through treatment of the material, closing the gap between form and content and making them one and the same. The simplicity of the artistic intention serves to provide a lot freedom to explore and experiment, and expand the visual landscape of the work. In his new works at the Canvas Gallery Titled “Extract” he uses metal to create sculptures akin to squiggles lifted from a page and brought into the third dimension.

The work came out of the 2D steel panel which the artist started playing around with, creating marks with tools to give it an interesting texture. These twisted lines were then “extracted” and turned into 3D sculptures by putting metal rods through a rigorous process to manipulate them into various shapes. In a way it them becomes a 3D drawing, bending and twisting the line to give it a new shape and identity. These undefined shapes are reminiscent of a plethora of objects, from coiled snakes to tangled wires atop poles on the Karachi streets, the ambiguity giving way to the viewer’s imagination to conjure up its own narratives.

However, one finds it hard to shake the idea of confusion when viewing the works. These squiggles strewn across the gallery floor in deep shiny black and pure white appear as scribbles vigorously scratched onto the audience’s visual field. There is a sense of entanglement, or frustration and uncertainty. The randomness of the shapes and rigidity of the material adds to this feeling.

These new works are a step away from the Nawaz’s previous style which involved more defined shapes. Found metal scraps were treated and layered in a rectangular block, and metal was turned into a round pillar accented with cracks. These minimalist works were more defiant, pushing the envelope and in a way challenging notions of what sculpture can be, while the latest series seems to enter back into a defined and accepted premise of the “art object”. Yet this is not meant as derogation, as the work seems to have acquired a certain looseness and fluidity as it has become more organic, which makes it a lot more expressive. The artist himself feels he was done with his previous explorations and needed to delve into newer trajectories, which is necessary for the growth and progression of any art practice.

In an age where artists are required to write volumes to describe their works, weaving in complex ideas into one canvas, it can perhaps be considered almost daring to see an artist present a statement of just two lines. Nawaz’s work is free of pretensions and is instead simple in their visuals and in their purpose. The pure pleasure of playing with objects and materials and creating visual pleasure is what makes art in the purest sense.