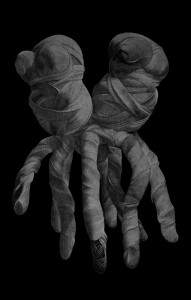 Of Nightmares and Daydreams

The power of an intelligently curated show can never be undermined – deciding upon how to lead the viewers into spaces, where to leave definitions blurry and how to garner and amplify their interest is critical in making gallery visitors feel as though an exhibition was created for them to experience. Binary, by Adeel uz Zafar, curated by Zarmeene Shah, at Canvas Gallery was a pleasant surprise for many of the viewers as the art displayed took control of the interiors in the gallery and let itself define the parameters within the walls of the exhibition rooms. As the viewers meandered around the space and glanced at opposite walls, we soon realized that there were many narratives and hidden stories within the pieces which both the artist and curator have meticulously worked at.
After graduating from the National College of Arts in 1998, Adeel uz Zafar was involved with illustrating children’s books and started to dabble with etchings on surfaces after capitalizing on the lack of paper and pens around him during a trip up north in Pakistan. Zafar is now known for his imagery which involves intricate gauze and bandaging on stuffed toys, blown up to massive scales. These fantastically weird creatures blanketed in monochrome have a surreal way of breathing life on a 2 dimensional surface – this is due to the intensity of skill and the sensitivity of varied pressure when etching the wrapped bandages around the stuffed toys’ distorted anatomy. Having a understanding of Zafar’s work, Zarmeene Shah talked about the initiation of curating a show with him during 2013 and explained that the curator-artist relationship takes time to develop based on mutual interest in each other’s practice. Having seen his work transform towards the current pieces which are part of Binary, Shah notices that Zafar’s current work still continues to remind one of lucid childhood dreams by using illustrative images mixed with a deep dose of reality. Zafar also comments on how combining images and contradictions is a reflection of his thought process and inspirations, validating how the naïve nature of children playing with stuff toys in their imaginary world is not too different from adults struggling to deal with the reality of life in front of their eyes every day.
Paradoxes, ironies and deceptions are a few hints behind the title ‘Binary’; this body of work at Canvas Gallery is an extension of Zafar’s visual enquiry into the mystification of fiction and childhood stories. Although Zafar is an established Pakistani artist, it is very difficult and moreover, presumptuous to search for distinctive ‘Pakistani’ features in his oeuvre. Extrapolating iconic images from films, politics and art history Binary encases works that truly speak to anyone at any point in the world. This witty yet apprehensively dark use of global issues in Zafar’s work reads as a duel of emotions within the artist’s process. On one hand there is homage and an admiration for statues like David, rebels like Guy Fawkes and legendary blockbusters such as Godzilla, but on the other hand the viewer can sense an inquisitiveness and suspicion from the artist and curator; what makes some images, characters or stories more important than others? How does their relevance alter when replicated through dozens of images? Does the technique of an artist manipulate the context through which the viewer appreciates these iconic figures of global phenomena?
While the curator and artist abstain from providing absolute conclusion to these burgeoning questions in the viewers mind, the pair openly discuss that the idea of concealing and hidden imagery is a paramount feature of the exhibition. Ideologies evolve in different trajectories once seen in the technique which Zafar employs – plus, the emphasis on comparison which is highlighted in the intelligent display of the pieces, implore the viewers to start creating their own narratives about pop culture and its role in history. Zafar and Shah use the two tiny portraits of the American King Kong with the Asian Godzilla to compare how this face off between colossal giants in a movie is very similar to the battle of economies. Fixing the tiny cartoon portraits in ornate frames with bows and standees, adds a bizarre time clash, juxtaposing modern anti-heroes of cultures.
Shah and Zafar point out to the pieces After Aphrodite and After David to exemplify how technique reshapes the way viewers will digest the most hallmark images. By seeing the textures, high contrasts and plenty of greys on pitch black surfaces conceptually redefines how we see Renaissance, Grecian and Roman statues in their towering glory at museums in Europe. Zafar explains that while the great masters worked arduously at chiseling out stone, his minute and gradual scrapes mimic the carving away at a surface. We can then instantly compare the massive time difference, cultures and stories of the plethora of artists who use these historic images in their own ways to cultivate a certain message.
Perhaps the most pertinent aspect of Zafar and Shah’s collaboration is how the fascinating stories behind the characters or images used in Binary are in dialogue with one another. From etchings of nuclear and volcanic explosions to masks that categorically speak about certain genres, the conversation over grey areas could be never ending; fiction is reality and dreams are normative and cartoons and stuff toys seem more genuine than human beings . While the duo are careful not to unravel everything to be easily read, the show works within a certain veracity for the audience who are made to step closer and closer to examine what lies in front of them.