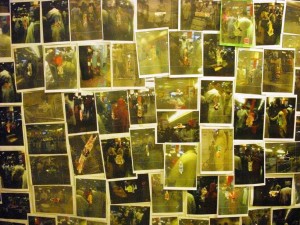 The Sound of Silence

Silence is a response. It holds prestige in the realm of conversation. There can be no communication without it. The two words ‘Silence Please’ that were used as a title for an abstract art exhibition at Nairang Galleries from May 5-15, 2014, invited a response in themself. One questioned the stance of this demand: was it an order, a request, an announcement or a wish?
The paradox also being silence in terms of viewing – how do we view art and does vision require words? Another review on the show states: “Artists today are so conscious about verbal discourse and conceptualizing exercises that they try to match their creation with the latest philosophies and doctrines in the world of art” (Quddus Mirza, 11 May 2014, The News on Sunday).
The most intriguing aspect in the wholeness of this exhibit was the tonal deviation within abstraction. Silence, a word which means soundlessness (quietness) is often misinterpreted by limiting its probability. There can be a high-pitched silence, the kind we realize at funerals, graveyards, no-response-from-a friend and examination centers or a low-pitched one in libraries, museums and religious centers. Just like the tones of some colours – blue, for instance, which runs from its dark royalty to the vastness of light-sky-blue – silence is indisputably abstract.
The show can be approached as a curatorial homage to this abstraction. Amna Hussain carefully selected a total of 22 works by ten artists – an attempt that was a breakthrough on its own as it assembled a versatility of practice and experience. Consequently, the show exhibited a diversity which is generally missed nowadays. According to the curator, “The aim behind the show is to provide the viewer a calm, serene, peaceful and intimate environment to view and enjoy the art work. It will provide the viewer a chance to interact with the art work rather than other people.”
Minelle Gaya’s In Memoriam 1, 2 work stood out in its humility and precision of form – the act of bringing the unnoticeable or purposely-ignored took me to the much ignored other truths and lies around us. Silence being the most celebrated victim! Two panels were painted to bring an essence of dampened walls, the kind we want to hide in our homes, paint over or build anew. In smooth opposition we hadZarah David’s serene oil on canvas works to bring the viewer back into regular mists of ‘beauty’ and ‘color’. David’s attempt is captivating as it searches for the unnoticeable in the regularly-noticed; it also leads the eye to an absence rather than a presence. Sadia Farooq’s practice of Zikr directs the mind and eye to confirm silence as the eventual conversationalist and center of existence. The tedious, minuscule detail and closure of black and white opens a dialogue of continuity. Sajid Ali Talpur’s pen on paper drawings are more raw and stimulating in executiont, the density and spontaneity of form leads to multiple layers/visions and possibilities.
An extension and fluidity of form, or an urge to disseminate is critical in all the works, from Minahil Hafiz (graphite and ink on vasli paper) and Muzamil Khan to Anil Waghela’s works with tape, where technique overpowers and becomes the content itself. A walk through the works emphasized their visceral quality, a shared/ranging silence; sensitivity and subtlety of form prevailed and gave a liberty of making connections, to the viewer. From Muhammad Umar’s crushed, metal relief, reflective sculpture to Sehr Jalil’s installation, Promised Lands, another powerful quality of the exhibit was the courage to outspread margins which led to finding oneness in the unanticipated. Sehr Jalil’s installation reflected the imaginative power of the artist and her uncanny approach towards image making: numerous pictures taken at the airport were altered and composed to make a saga of voyage, both physical and emotional, something that is often witnessed at these ports of departures.

We fine-tune the signals on a radio to bring out an aspirant sound from it. It is the much required fine-tuning and valor that’s required to bring words, visuals and thoughts from their isolated selves into harmony and rhyme! ‘Silence, Please’ worked as a much awaited fine-tuned experience.
Sarah Janjua is an artist and writer based in Lahore