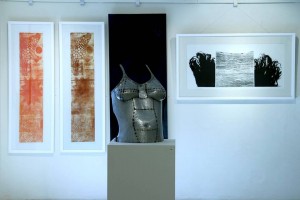 Summerscape 2014′ brings together a plethora of artists, 52 to be exact, each with their own distinct style. At first glance, the show seems to overwhelm with the abundance of artworks placed at every turn, yet there is a certain harmony in how each piece, whether it be because of medium, color or topic, seems to gel in with and compliment the next.
Placed right at the entrance are Arshad Faruqi’s wire and solid cones, aptly titled Presence of Absence. They sit there as if placed by chance, but at a minute’s look they draw you in with their simplicity, their mere act of being. The shape is one we are all familiar with, nothing unusual to the eye but there is a certain intricacy to their form that compels one to give the piece time, to absorb, to understand and form a connection.

Quratulain Qamar Choudary’s Round the Clock and Magnified Intricacy both show her artistic growth in the short time since her recent graduation. Her dichotomizing of clock parts, the act of dissecting the physical aspect of measured time is done in a sophisticated manner. An interesting addition to her work is the magnifying glass giving the work further dimension. Arif Hussain Khokar’s soft pastel on paper is a piece anyone who has held a crayon as a child can relate to; the mere act of scribbling can invoke a sense of childhood nostalgia in a viewer. He uses these lines of familiarity to speak to his audience and draw them in. From metal and copper to the softness of pastel on paper, the shift in media allows a break in viewing, allowing each piece to stand on its own.
Most of the works have been displayed before, allowing one to return to old favorites or giving those artworks one had written off another chance. Amean J.’s BHV Zoo series, a well-known book, makes its presence known through a single photograph of female zoo visitors. Naiza Khan’s Bullet Proof Vest, made of galvanized steel depicting the female torso is a piece that one falls in love with over and over again. It demands a certain kind of attention even from afar.

The show amalgamates both contemporary and traditional art forms. Anjum Saeed’s striking abstract Zameen Aasman Se has multiple strokes of heavy paint generously applied in various bold hues bringing to life the stark white background. Placed just a few feet away from it is Mohan Das’s My Heroes in Sindh which is resonant of truck art, the bright colors and the steady application offer an interesting albeit uneasy shift of the eye between the two paintings. Qadir Jahtial’s Still Life polyptych reduces images to an array of bold chromatic colors leaving the viewer to distinguish between the shapes and color blocking on their own, while Muhammad Ali Bhatti’s oil paintings ThariGirl and Old Man although well executed, seem slightly out of place amongst the overall language of the show.
One of the many interesting aspects of ‘Summerscape’ was that many of the works on display, each belonging to a different artist, managed to correlate on different levels. Working with graphite on paper, Manisha Jiani uses strong lines of different tones and size to depict what she believes to be the beauty of deformation. The lines define not only her surroundings but her own inner sanctity. Artist and art educationist Rakshanda Atawar also uses lines in her untitled works. There almost seems to be a certain calculated logic behind her strokes and curves, contorting into shapes that are reminiscent of the female form. In an Express Tribune interview Attawar describes her work, saying, “There is no great philosophy behind it. It is about turning the flat surface into a space and then the space into an emotion…”

The show’s expositions are varying; some elements are stimulating while others struggle to impress. Overall, ‘Summerscape’ offers art connoisseurs a compelling narrative of the Karachi art scene all brought forth as one.
Aniqa Imran graduated from Indus Valley in 2012 with a Bachelor’s in Fine Art and is currently working for the Foundation for Museum of Modern Art in Karachi.
All images courtesy of Jamal Ashiqain.