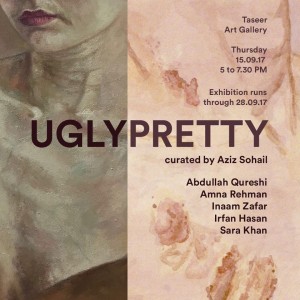 The Psychology of Skin

As I stroll across the gallery upon a silent afternoon, gazing back at skin, marked, masked and scarred, translucent and sublime, painted to magnificent detail or washed upon and left faceless on a surface – there is disquieting beauty, probably many among us would want less of it, but I certainly want more. Aziz Sohail has curated ‘ugly-pretty’ a group show at the Taseer art gallery. My mind is going through its own discursive ugliness and prettiness, as I look. This narrative is filtered, calculated and cautious yet remarkably its own opposite. I have several questions and the eminence of ‘context’ stands out. I’ve been assigned the task to review this composite of opposites and it comes as a challenge of scratching two surfaces, up close and deep i.e. flesh and queerness.

One of Lucian Freud’s popular model’s and muse, Australian performance artist Leigh Bowery is known to have said “Dress as though your life depends on it or don’t bother” (Interview Magazine, 2017). Bowery’s statement is presumably about attire but for me it refers to the human condition of disguise, of owning an exterior with force and joy. The skin has invisible and visible layers. Amna Rehman’s juxtaposed pieces with Freudian tenacity of flesh and an inwardly luminous gaze; both ridicule and celebrate this cover of humanity.

“The aura given out by a person or object is as much a part of them as their flesh. The effect that they make in space is as bound up with them as might be their colour or smell… Therefore the painter must be as concerned with the air surrounding his subject as with the subject itself” (Art-quotes.com, 2017)

Rehman’s work is a seductive story, the characters have a life of their own, be it a portrait or another body part. “Freud’s gift to painting was to demystify the nude—to find the beauty in the grotesque—and to do it without seeming unaffectionate. “For me the paint is the person,” Freud explained to Lawrence Gowing, a biographer. (Economist.com, 2017)

Inam Zafar’s is the intangible of this matter -The hope of renewal when a mark embraces or abandons the skin. Is it a scar of love or lust, pain or pleasure? Washes and overlapping, fractions of the body, these are unfinished poems…the skin preserves and heals; it is a canvas of memory and moment. Zafar’s solicitation is as sensitive as his narrative. “I like skin,” Lucian Freud is on record as saying. “It’s so unpredictable.” (The National, 2017)

Abdullah Qureshi’s reclining, subtle, anonymous, nude forms have homogeneity, and they all belong to one another while being on separate surfaces. Anonymity or faces are confronted with soft washes of form that give identity, the figures are male bodies. The medium and narrative are adrift but the effect reminds one of Spensor Tunicks performative nude installations. “Tunick said there was something about the human body and how it was juxtaposed with public space that had inspired his work. The natural, soft vulnerable body that’s up against the concrete world – it creates a dynamic that interests me. The crowds of blue people were also a representation of the rising sea levels caused by climate change, Tunick said. It’s the idea that the bodies and humanity is flooding the streets,” he added. (The Guardian, 2017)

“Spencer Tunick transformed a disorganized crowd of civilians into beautiful art objects. We were asked to look forward and upwards, no smiling or laughing please, to make his photograph as serene as possible. We became a sea of silent, blue monoliths, facing an almost invisible lens. We became water flowing through a city previously flooded by it. And although we moved as one, each of us felt anything but anonymous – a powerful combination in the current climate. Lying on the pavement at the final location, a street in the city centre, was the closest I’ve ever been to an absolute stranger’s body, yet the experience wasn’t sexual in the slightest. Instead, I felt moved to be involved in this one-off homage to Hull’s maritime history. I’d urge anyone to strip off for Tunick if they ever get the chance” (the Guardian, 2017)

“Janssen says it will be the last time he takes part in one of Tunick’s works but has positive words for anyone thinking of taking part in a Tunick project. “I always say that it’s the least sexual thing that I’ve ever seen in my life. We are naked, but it is not important. We are equal. Big people, small people, all colours, all walks of life.” (Perraudin, 2017)

Tunick is an artist more than a photographer. He regards his pictures of masses of naked people as much a performance event as a photo shoot. (Perraudin, 2017)

Sarah khan’s psychedelic and dense mask like portraits are like spies into more and more skins. Laughter and fear, child and adult, mockery and poise walk together here. “Human skin is a barrier that offers important protection from viruses, bacteria, and ultraviolet radiation. Nina Jablonski, an anthropologist at the California Academy of Sciences, also views skin as a sea of color. Her interest, however, is in what skin can tell us about human evolution. How and why did we evolve from hairy and fur-covered primates into the essentially naked animals we are today? Acquiring an ability to sweat—and thereby cool the body—enabled humans to leave the protection of the sweltering forests of Africa and populate the world, she said. To protect itself from the sun, human skin produces melanin, a skin-darkening agent. People living in regions of high ultraviolet radiation produce more melanin than those who live farther north. There is no black race, no white race, said Jablonski. Variations in skin color are an evolutionary adaptation correlated to UV radiation levels. Human skin and the sense of touch give people a way to physically and emotionally connect with one another. Scientists are just beginning to recognize the power of touch to promote healing, increase socialization, and boost immunity. Studies have shown a correlation between high rates of affection in childhood and low rates of adult aggression. Babies who aren’t handled enough can fail to thrive. (News.nationalgeographic.com, 2017)

Irfan Hassan’s glorious technique and glaring gaze, in his beautiful portraits of men, share a privilege of vivid identification but even more speculations. Is the visible and identifiable an answer to every question of identity? The abundance of detail efficaciously, keeps many secrets.

“By the time the iconic photographer Nan Goldin was eighteen, she was living in Boston with a much older man. Eventually, she fell in with a group of drag queens, who hung out in a bar called the Other Side, and began to photograph them. She wanted to memorialize the queens, get them on the cover of Vogue. She had no interest in trying to show who they were under the feathers and the fantasy: she was in love with the bravery of their self-creation, their otherness. Goldin was re-creating herself, too. A 1971 picture taken by Armstrong (friend) shows her with her curly Bette Midler hair hanging loose and frizzy, her eyebrows heavily penciled, striking a pose—a young woman imagining herself as a drag queen. Illusions on top of illusions, in a photograph, that most realistic of artistic mediums. (Nan Goldin’s Life in Progress, 2017)

Berlant and Warner in their essay ‘sex in public’ thoroughly interrogate this dilemma “To be against heterosexuality is not to be against norms. To be against the process of normalization is not to be afraid of ordinariness. Nor is it to advocate the existence without limit’. She sees as produced by bad foucauldians. Nor is it to decide that sentimental identifications with family and children are waste or garbage or make people waste or garbage nor is it to say that any sex called lovemaking is not lovemaking. People feel that the price they must pay for social membership and a relation to the future is identification with a heterosexual life narrative, that they are individually responsible for the rages, instabilities, ambivalences and failures they experience in their intimate lives. Heterosexuality involves so many practices that are not sex. A world in which this hegemonic cluster would not be dominant is at this point unimaginable. We are trying to bring that world into being.” (sex in public, 2017)

(the Guardian, 2017) The day I got naked for Spencer Tunick. [online] Available at: https://www.theguardian.com/artanddesign/2016/jul/11/i-got-naked-for-spencer-tunick-sea-of-hull-photographer [Accessed 28 Sep. 2017].