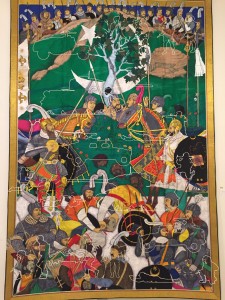 Sulah, an exhibition curated by Alia Bilgrami, at the National Gallery (PNCA), Islamabad, boasts a group of artists who share a common historic and cultural identity. Keeping in line with the curator’s premise, the artistic practices reflect on the difficulties and tragedies of displacement. The works on display albeit aesthetic and skillful, present a bleak but accurate picture of the artists’ experiences. Sulah attempts to bridge the geographical gaps that have arisen as a consequence of political strategy and upheaval by reconciling artists of Hazara, Pukhtun and Baloch descent in this exhibition, and providing a platform for discourse and shedding due light on personal struggles.

Sulah includes the work of artists Ali Baba Awrang, Ayesha Durrani, Khadim Ali, Malina Suliman, Muhammad Atif Khan, Murad Khan, Mubarak Shah, Saddam Khan Murad, Sajid Khan and Shahaan Shah. Though most of the artists are relatively established, not all of them are mainstream names in the Pakistani art scene, however due to Bilgrami’s inclusive curation they are a welcome divertissement in terms of their respective oeuvres. Political undertones and overtones are a commonality found in every piece, bringing to the fore a mindful contention that is difficult to escape and unsurprisingly prevalent in most Pakistani Art.

Ali Baba Awrang’s calligraphic pieces bring to mind expressionist paintings. His warm palette, black textual mark-making and concise calligraphy, create abstract content that is almost representational. To elaborate on this oxy-moron, his painting Untitled, composed of ink and silver leaf on wasli, is reminiscent of a landscape on fire with black flames composed of the letter Alif nuanced by red nukta’s, emerging from a muddy water body of sorts. The textured silver leaf on the top half of the composition is akin to a hazy grey sky, with a lone cloud of compact diagonal calligraphy hovering in it. His calligraphic compositions and style serve as a breath of fresh air within the genre of painting, refreshingly devoid of figures yet captivating. Awrang, uses calligraphy to address the struggles of life and seeks to overcome the many obstacles humanity faces through poetry and art. According to Bilgrami, this is the reason for including his paintings in Sulah, it is poetic but with a contemporary aesthetic that goes very well with the rest of the work in the show.

Khadim Ali’s large tapestry Untitled From the Otherness is striking in its portrayal of scenes of war re-appropriated from the Shahnameh with severed heads, war animals and soldiers in battle. This illustrative piece has the crescent and star of the Pakistan flag peaking out from behind a tree in the top centre, alongside other modern day, recognisable imagery. Camouflaged in the busy landscape are embroidered linear representations of modern day war craft such as tanks, jeeps, soldiers wielding snipers in various positions of attack, and people carrying unconscious bodies. These minimalist images are immediately identifiable as snapshots in constant rotation on current news media. Their intention may be to evoke empathy but it brings into sharp focus the extent of our collective desensitisation.

Sajid Khan’s training in miniature painting is evident in his masterfully rendered, achromatic graphite pieces that have the feel of Siyah Qalam. Untitled, a drawing composed of collage and graphite is surreal in its visual language. To add to the character of the mysterious person who adorns a grey Turban with a swirl of smoke in place of a kulla, there are three bees resting in the grey background. The only part of the face that is uncovered is where the eyes would be, but instead of eyes, there is a pasted visual of beach-goers at seashore. Like most of Khans work, this piece’s minimalist yet straight forward subject matter is thought-provoking at best – leaving the representation open to conjecture with its contrasting collage images – and ethereal at worst.
Muhammad Atif khan’s work is a visual delight. Digitally juxtaposing diverse motifs from ubiquitous imagery, i.e. truck art and Mughal miniature paintings, Khan creates scenes that transcend time and space while commenting on political injustices. As exemplified in Gardenscape VI, despite his use of popular imagery, the original contextual nuance gets subverted while new meanings are subtly developed that address harsh social, historical and political realities.

Malina Suliman is one of the two female artists in Sulah. Her three-part installation included in the show is distinctively feminist. Inspired by the historic art of handcrafting the burqah in her hometown of Kandahar, her work expresses the difference in experiences of women in the East and West. Her installation consists of two sound pieces, multiple textile pieces that make use of the technique of pleating in clothes and text as well as two simultaneously playing videos.

Up and coming artist Saddam Khan Murad’s figurative mixed-media pieces are composed of sturdy yet fluid mark-making that lend his work a cubist, collage like quality. His artistic concerns address the human need for conformity and the inherently human desire to assimilate.

Alia Bilgrami independently curated Sulah, an Islamabad based visual artist and curator, and was part of the Pukhtun Festival, organised by Cultoor. The exhibition ran in tandem with the festival at the PNCA, Islamabad from 30th March to 12th April 2018.