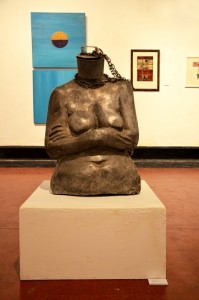 Anwar Saeed, a well-known painter of Pakistan, has been part of the faculty of the National College of Arts, Lahore, where he taught generations of young artists and worked with eminent individuals like Zahoor ul Akhlaq, Salima Hashmi, Colin David and several others. A painter regardless of his years,keeps on producing works and in some cases the maturity of age adds a high level of sophistication to his art; but compared to artists, art teachers, especially government employees, have to leave their jobs once they cross the age limit of sixty years.

Anwar Saeed too, reached the age of sixty on 24th October 2014 and left his teaching post at NCA, but a genuine teacher and a good artist is never detached from his contemporaries, fellow painters and former students. Thus the faculty of the Fine Arts Department, as a gesture to mark his last day at the institution and paying homage to the painter, organized an exhibition ‘Along with Anwar’ at the Zahoor ul Akhlaq Gallery, NCA.

Curated by Nausheen Saeed and Quddus Mirza, the exhibition included works of artists who are presently working in the Department of Fine Arts at NCA. It was a way to acknowledge the presence and contribution of Anwar Saeed, an elegant gesture to bid farewell to a colleague and friend.

The invitation card of the exhibition showed a painting by Anwar Saeed of two men under an umbrella. Perhaps, the image signified the link of the artist and art teacher to this institution, where he taught for almost thirty years. Even though the works collected and displayed at the exhibition hardly suggested similarity with Anwar Saeed’s imagery (except Afshar Malik’s painting), the diversity of works reflected the variety of opinions, approaches and views surviving simultaneously within the Department of Fine Arts at NCA.

Although both curators tried to create connections between the works on display, in some places these associations appeared forced or superficial. Yet the exhibition provided a unique occasion to glimpse the works of the faculty, an experience that is usually not available to students and outside viewers, since the majority of artists working at NCA exhibit their art in Karachi or abroad. Thus, the rare chance to see new and representative works of these individuals was welcomed by a large number of students, both from NCA and BNU and other artists, curators and critics.

The show started with a work on paper by Jamil Baloch, and a similar kind of minimal sensibility was evident in the painting of Dr, Murtaza Jafri, the principal of NCA. Soft and swift sweeps of brush created a sense of infinite space on the small-sized paper. Likewise, Mohammad Ali Talpur used lines of traditional calligraphy to make abstract imagery, and a similar kind of treatment towards tradition was observed in a painting by Imran Qureshi, in which elements from old miniatures were reorganized to shape a contemporary imagery.

Along with these sombre pieces, the playfulness of Saba Khan and Afshar Malik and challenging forms of Safdar Ali and R.M. Naeem offered interesting contrasts. Naeem, contrary to his reputation, produced a work in three dimensions, a television set, was burnt from one side, but still switched into the electricity socket. The work signified how the media in present times have corrupted our personalities, lives and mode of thinking. Next to Naeem’s piece, a range of works by other artists were hung, with each individual focusing on his/her particular pictorial and formal concerns.

These aesthetic issues were explored in the large relief by Isma Hussain, in which the artist composed bulging female bodies. Overlapped, cramped and converging on top of each other, the work could be read as a comment on how the body becomes a means to express more than just one connotation and content. An identical approach towards the body was visible in Laila Rahman’s painting, in which naked bodies were drawn in a stylized form and seemed to be levitating towards the sky, in which a round disc suggested  the moon. The physicality of the body, particularly of the female, was explored in Nausheen Saeed’s sculpture, in which the artist joined the torso of a woman to a metallic milk container. The material, format and details signified that the merger was not just technical or formal, but contained and conveyed a meaning, which indicated how a societal divide has forced to perceive one gender as a means of producing pleasure, productivity and domestic functions.

Concepts of body and political connection was observed in a large painting by Quddus Mirza, which looked like children’s primer. Constructed like a page, with pictures and corresponding letters of alphabets, the work revealed the sentence “Rest in Peace”, an ironic message, since the division of body organs alluded to another, rather violent meaning. The conceptual twist in his painting was also to some extent evident in Kiran Saleem’s work, in which the artist joined a piece of torn brown paper to her white canvas, but the painted part and the actual paper looked as one, and so convincingly that it deceived many viewers at the opening.

With works of other faculty members, such as Sobia Ahmed, Imran Channa, Ayesha Durrani and more, the exhibition was an important event, not only to mark the passage of Anwar Saeed from the public to the private sphere, but also to bring the private concerns of our artists working at the largest public art institute to the public.