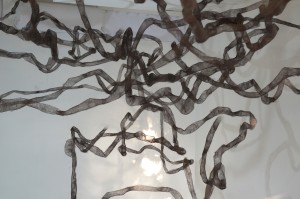 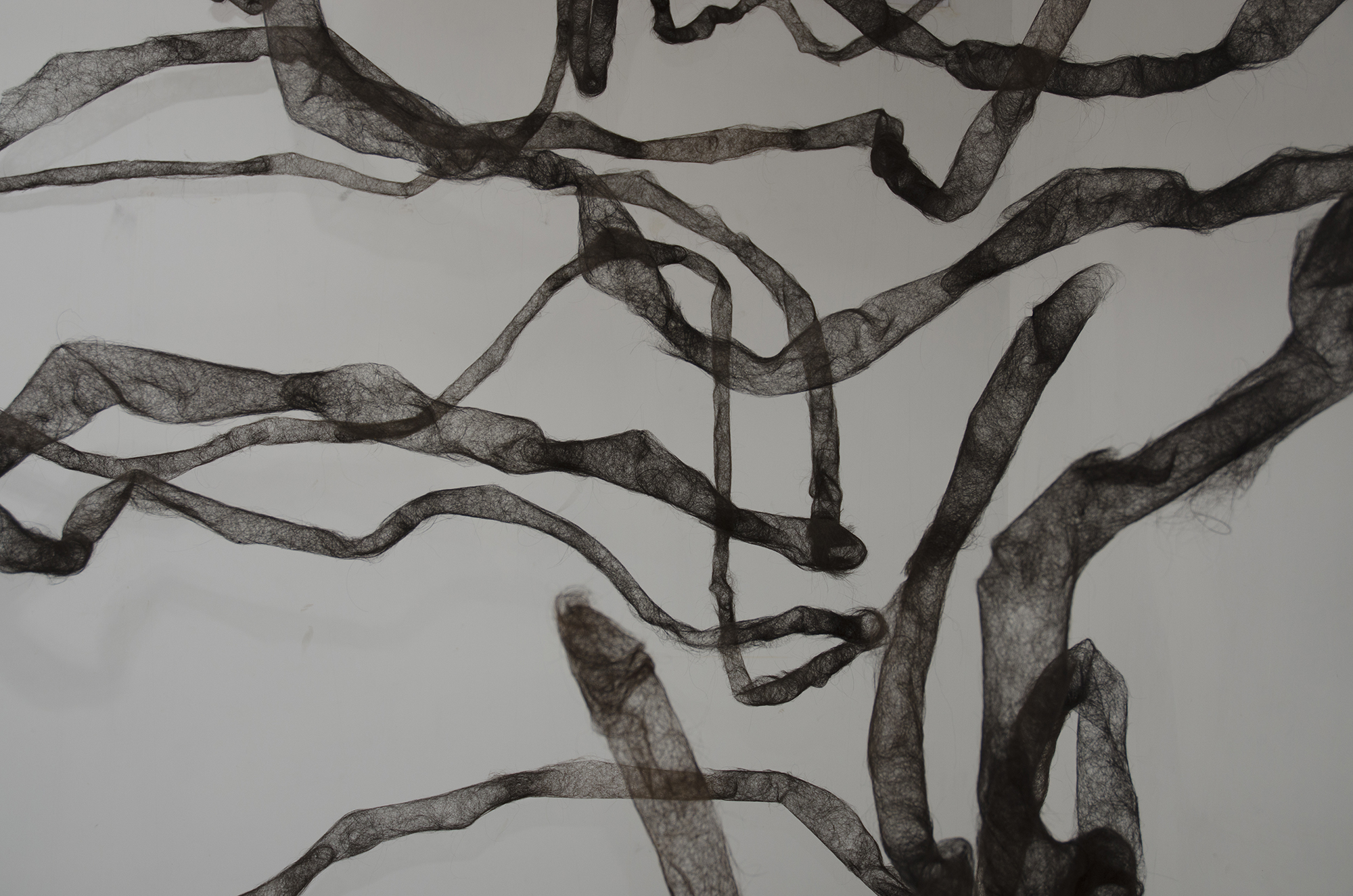 Disclaimer: It is inevitable that the following essay will contradict itself.

At Rohtas Gallery, Ali Kazim put up a single work in an untitled exhibition, thus steering the viewer firmly out to sea and then leaving her stranded offshore. No markers, signposts, lengthy explanations or tangential press releases accompany the work. At most crowded exhibition openings, one is not particularly grateful for the company because it distracts from the work on display, but in this case such distraction is welcome. Kazim’s installation makes the act of looking so singular that it evokes primarily a sudden visceral response. Description becomes aggression. Unrelated conversation is easier.

The work stands by itself, not only because of its lack of verbal and textual coordinates but also because it is held physically in space by a nearly imperceptible mechanism. Hollow cylindrical coils delicately coaxed out of hair float in space, convoluting around each other and converging finally towards a denser arrangement, in front of which a visitor ultimately has to halt, lest one bumps right into the weightless mass. The automatic one-directional approach as chalked by the visitor’s path from illusory immersion towards a point of static survey recalls the language of monumentality. And yet, one looks at the same time at a fragile ephemeral material that makes no claims to time, beyond the subjectivities through which it is experienced. Its impermanence leaves the lasting impression.

Hair, regardless of whether it was really natural or synthetic, as featured in Kazim’s work is unambiguously human. As a unique extension of the body, hair is at once closely connected and already expired and out of reach. Its sensory implications as within and without oneself make it a suitable material to comment on the body itself as inhabited and observed; as subject and object at the same time. This connection with the human body is further strengthened by the fact that Kazim’s coiled installation resembles the form of innards and guts, as it hovers with discrepant serenity over the bodies of its viewers.

Hair has also historically been a potent symbol of immense cultural, religious, and social significance. It has variously been used as a marker of class, privilege, power, gender, ethnicity, and race. At the same time it is just as actively used to negate all of the above classifications. Often a head full of hair is associated with virility and health where as shaving one’s head is associated with servitude and shame in many cultures.

Kazim’s work may momentarily touch upon one or more of these points of reference but importantly, his installation seems to be composed of hair, not as current exhibitory testament of lives but as involuntary human debris. One is compelled to consider an obsessive collective process here regardless of the fact that perhaps in reality Kazim may have simply acquired the material in an easier way. Looking closely at each minute strand, the accumulation of this mass seems relentless and prolonged. It hints at a methodical collection of naturally shedding hair; on combs, sinks, clothing, furniture and elsewhere; leaving in its wake the traces of a human presence, while mapping and even quantifying the process of ageing. However, Kazim has inverted the exhaustion of shed hair by forcing it into animated adrift forms that zigzag through each other, moving with grace and inexplicable force, for as long as each hair remains firmly fixed in place. Thus the vulnerability of each fallen hair is contrasted with the illusory persistence of these forms, perhaps as an allegory to the functioning human body as a precarious balance between a consistently flailing and consistently recuperating system.

Kazim does not chaperone a visitor through his work, which allows one to negotiate with it personally in the flesh, rather than through the mind of the artist. The work itself uses an intimately familiar material in a peculiar atypical way to the effect that it is immediately relatable and immediately confounding in equal measure. Transcription of the impact of these formal but affective choices into interpretive language is an unnecessary, forceful task. The pleasure of looking at ‘Untitled’ by Ali Kazim is above all, sensual.  Perhaps, sentiment as the primary reaction of an audience is not always an unwillingness to examine cerebrally and may not amount to a denial of history, context or allegory. Rather, it is introspective silence in face of an exceptional work of art.

Images courtesy of the artist.

Madyha Leghari is a visual artist, writer and a graduate in Fine Arts from the National College of Arts. She lives in Lahore