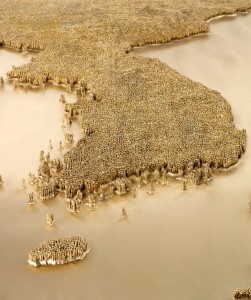 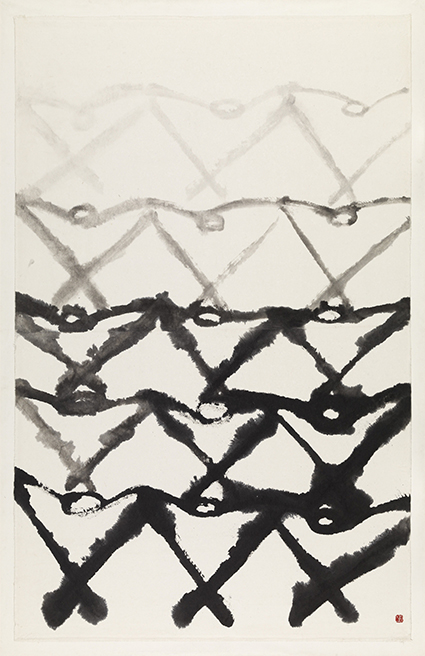 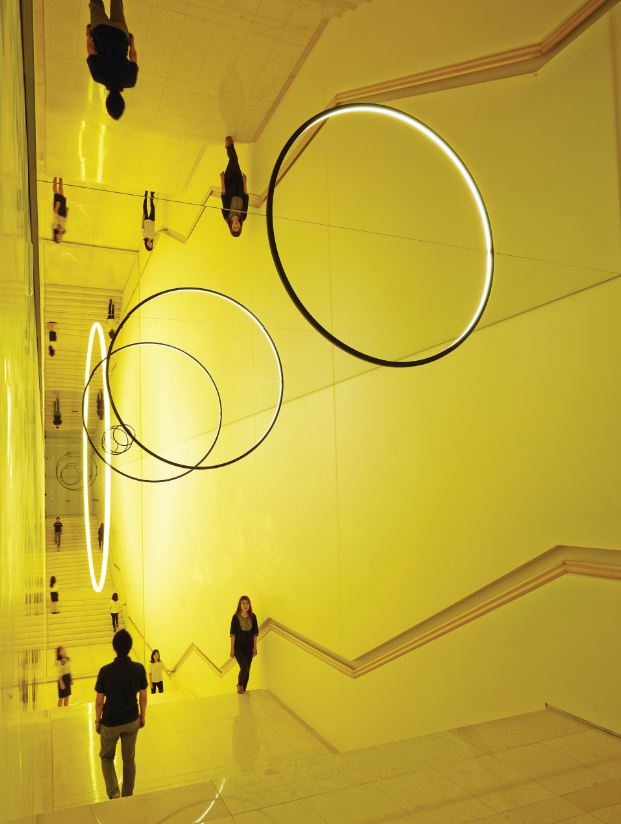 Last year, a December vacation took me east, not to the warm holiday countries of Thailand or Vietnam but to South Korea, where we were lucky to have three days of intensely cold, bright sunlight. Artist Sun Mee Kang, who creates enormous installations using shapes and forms cut out of black and white adhesive vinyl, led me to Leeum, the Samsung Museum of Art, which was celebrating its tenth anniversary with a special exhibition ‘Beyond and Between.’

My first impression of Leeum from the taxi that dropped me at the entrance after driving around the building, which is built on a rise, was of an elegant, elongated glass and steel structure (designed by Rem Koolhas) flanked by a courtyard dominated by a Louise Bourgeois spider; I initially missed the spectacular external views of Museums 1 and 2, designed by Mario Botta and Jean Nouvel, which are set back from the road. I went through the long walkway leading downwards, ending in the basement lobby with a white rotunda in the centre, which leads the eye straight to the roof. Large video screens running a video installation lined the wall opposite the reception desk. The lobby is where the entrances to all three sections meet: Museum 1 for traditional art, Museum 2 for Modern Art, and the Samsung Child Education and Culture Centre.

Turning the corner to Museum 1, I found an ancient gold earring dramatically displayed in a black display case, with a box containing a screen beside it. This was a sample of Leeum’s Interactive Project, digital media installations consisting of multiple high res images taken from different angles. Viewers use a wheel device to rotate the pictures, which gives the object a sculptural quality and allows the viewer to see minute details otherwise invisible to the naked eye.

Museum 1 begins on the fourth floor, accessed by lift; from there one works back down to the ground floor, descending by way of the spiral staircase which wraps around the rotunda. The circular galleries are dark, the objects in their glass cases often displayed against a black ground lit with deep, golden light in the case of the Buddhist artefacts and calligraphies; or with clear light in the case of the ceramics.  One emerges from each gallery into the brilliant white of the staircase, flooded with natural light, descending to yet another dark floor. This play of contrasts is as much a part of the viewing experience as the artworks themselves. What struck me here was not just the architecture and the display – I love ceramics and the collection of celadon and buncheong ware here is excellent – but the innovative curatorial experience, in which ancient and modern are juxtaposed to show common, timeless strains of thought. In the Buddhist art section, one walks past statues of the Buddha, until midway through the gallery, one comes up against Giacometti’s meditative Diego Seated, and the enveloping color of a Rothko. In the ceramic section, two enormous modern canvases painted with green and grey celadon by Byron Kim, appear against classic celadon ware; and Yee Sookyung’s Dark Side of the Moon, a large sphere made up of pottery fragments, gold and copper powders and gold leaf joined with epoxy, is set against an ethereal white moon jar from the Joseon dynasty.

I exited Museum 1 through Olafur Eliasson’s site specific Gravity Stairs, a mesmerizing and interactive piece where one walks down mirror-ceilinged stairs which reflect the viewer and the planets of the solar system, represented by semi-circular LED lights.

If Museum 1 is circular in shape, – from the outside, it is comprised of an upended cone and a wall topped with battlements, faced in terracotta, – Museum 2 is the opposite: it is a glass walled black box interspersed with rectangular boxes. Inside the galleries, these display areas, with their white interiors, break the monotony of the black-walled main cube, from which one looks out at enclosed pebbled spaces with silver barked trees. Like the first section, the play of light is dramatic, and elevates the museum experience: it is as much about the art as the architecture.

The exhibition on display, Beyond Space, was divided into three sections exploring and comparing the work of local Korean and international artists. The Far Eastern ethic was clearly visible in many of the Korean works, where flatness, line and geometry, and the use of traditional brush-strokes, informed many of the paintings, such as Lee Jong-sang’s Protofiguration which appears as if the brush-strokes used to compose landscape paintings had been transposed to canvas, or Suh Se-ok’s Dancers, where the brush strokes and composition are thoroughly modern. Other contemporary works open up an entire new discourse: technological advances, new materials and concerns gave rise to innovative, dynamic works such as Nam Jun Paik’s My Faust Communion, with its demonic images on televisions set into an altar piece; or Lee Bul’s Bells from the Deep, composed of two way mirrors and LED lighting, where the viewer enters a small room in which the floor drops far beneath one and the walls and ceiling seem’s to extend into infinity. If I don’t mention Western artists, it is because the work of Korean or other Far Eastern artists was an eye opener for me. But works by Josef Albers, Anselm Kiefer, Gerhard Richter, Francis Bacon, Damien Hirst, and Anish Kapoor et al were all on display.

This is a fine showcasing of modern and contemporary art from all over the world, from the fifties onward; and an equally excellent collection of traditional art, some of which are national treasures. Like other museums I visited on this trip, it showed me the enormous vitality and vision of art collectors from the Far East. These emerging economies have lost no time in building art collections which will remain important cultural artefacts for generations.

Ilona Yusuf is a writer and an artist