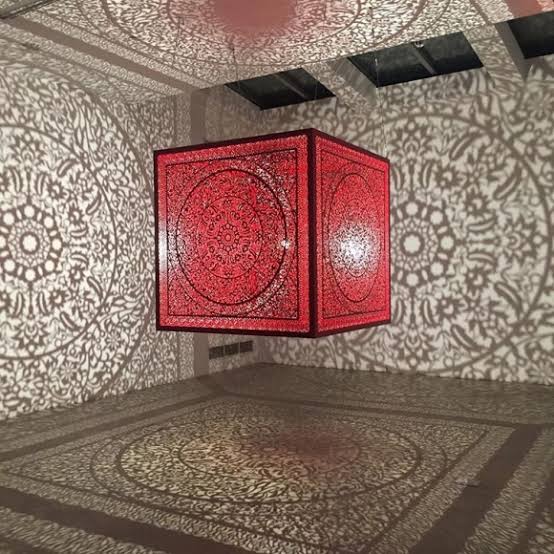 Objects, places, deities, rituals, constructed monuments, mountains, rivers, the inner geography of the body, the visual space of the Mandal

The (Un)Making of Meaning (or When Meaning Begins to Make Us)
From LB01 to LB02: on the continuum of an engaged artistic ethos
Inspiration: A Means to an End?

Objects, places, deities, rituals, constructed monuments, mountains, rivers, the inner geography of the body, the visual space of the Mandala or Islamic geometry, all achieve more than mere physical presence when they are interpreted as sacred. Historically there has been a tendency to conflate the sacred with the religious and to separate the two has mostly been the profane act of the modern individual.  However, as Mircea Eliade in his text, ‘The Sacred and the Profane’, very aptly suggests, “even the most profane modern mind is still informed by the guidelines of religion”. To then define the sacred as being separate from religion in itself would whole new contemporary theologies to be written with the past erased. To try to understand the basis of sacredness that is removed from religion is one task, tackled by anthropologists, theologians and philosophers alike but to understand the role of sacredness in art is a world in itself and Eliade offers a start for embarking on this journey. It is “the dialect of the hierophanies” that makes something sacred, according to Eliade, revealing that something is no longer just botanical or geological but has the ability to transcend into being “wholly other”.

“It is impossible to overemphasize the paradox represented by every hierophany, even the most elementary. By manifesting the sacred, any object becomes something else, yet continues to remain itself, for it continues to participate in its surrounding cosmic milieu. A sacred stone remains a stone; apparently (or, more precisely, from a profane point of view), nothing distinguishes it from all other stones. But for those whom a stone reveals itself as sacred, its immediate reality is transmuted into a supernatural reality. In other words, for those who have a religious experience all nature is capable of revealing itself as a cosmic sacrality. The cosmos in its entirety can become a hierophany.”
― Willard R. Trask, The Sacred and the Profane: The Nature of Religion

In other words, whether you walk into the grand designs of the grand Alhambra Palace in Granada Spain, the Mayan Temple of Kukulkan in Cancun or the Al-Masjid an-Nabawi the sublime feeling of the sacredness is felt not just through the history and grandeur of the places but is also symbolic in the transcendental, indivisible and infinite nature of a higher being represented through design. The overwhelming feeling you get when you look at the never ending, repeating patterns of arabesque and the influence of the ideology of omnipresence of God being ever present and ever present is emulated in the idea of the sublime nature of the structural design and ornamentation, according to the particular cultural and religious beliefs.

In coming across John Ruskins Lectures on Art, delivered at Oxford in 1870 it was curious to note how his views from almost a century and a half ago, still stir the mind and stand relevant in understanding the role of morality in the arts through a study of the sacred and by default the profane.

‘I use then to-day, as I shall in future use, the word “Religion” as signifying the feelings of love, reverence, or dread with which the human mind is affected by its conceptions of spiritual being; and you know well how necessary it is, both to the rightness of our own life, and to rightly understand the life of others, that we should always keep clearly distinguished our ideas of Religion, as thus defined, and of Morality, as the law of rightness in human conduct. For there are many religions, but there is only one morality. There are moral and immoral religions, which differ as much in precept as in emotion; but there is only one morality, which has been, is and must be for-ever, an instinct in the hearts of all civilized men, as certain and unalterable as their outward bodily form, and which receives from religion neither law, nor place; but only hope and felicity.”

By John Ruskin, ‘Lectures on Art’.

John Ruskin was one of the most influential art critic of the nineteenth century and was an important influence on artists and authors alike, including Oscar Wilde and Marcel Proust. When encountering either author you can certainly feel being carried away on an undercurrent that is constantly able to lift and transport to questions that go beyond your current reality. Even as Oscar Wilde doesn’t talk about religion, to quote Simon Critchley, “Oscar Wilde shows us faith without belief”, in describing Christ as a beggar with a marvelous soul.

Ruskins enquiry in the Relation of Art to Religion questions the influence of each on the other in three main ways. How far was art literally directed by spiritual powers, which he decidedly reads as a message of revelation or the authoritative guidance of supernatural powers. Secondly, how far was art exalted by these spiritual powers and lastly, how far was it able to advance the creeds it set out to represent.

In some ways Ruskin was a predecessor of  Eliade in talking about the idea of sacredness as a concept that speaks to the supernatural and the spiritual, but it is not doing so only through the avenue of religion. Religion might form the undeniable basis of how we determine the basic idea of what we consider sacred but by no means is it stagnant in looking towards a higher being alone. Morality still plays a role in toying with the idea of sacredness, but especially since the enlightenment the individual has become far more important in determining what is considered sacred than the preordained ideas stemming from religious doctrines.

In considering how far art aided religion in being present and real for the society we can look at any civilization with or without a formalized religion and see that there is a direct effect but it has seldom been a one way street. Simply looking through the art historical canon, we can understand how Christianity was heavily promoted through depiction and illustration of religious stories in churches and beyond. From the Leonardo Da Vinci’s ‘The Last Supper’, made in 1490 to Barnett Newman’s ‘Stations of the Cross’ made in 1958 through 1966 show how art went from its functional use of preserving the stories of religion to religion serving as inspiration for art. Where the Sistine Chapel served as a place of worship for Christians, painted with images of God and Man, ‘The Rothko Chapel’ serves as a haven of meditation and peace for all religions.

The draped Madonna with an ever-peaceful smile stands to be just as sacred as the sculpture of the mythological Greek God of Apollo, who is now set in stone and carved out in the minds of men. In all their glory, piety and high morality art and religion go hand in hand in defining the ideas of the sacred. The power of realistic art in Christianity held great sway on the religious minds of Europe but what when you talk about sacredness in the context of Islam and art? A religion that is represented mostly by recurrent motifs, vegetal and geometric patterns, calligraphy, architectural design and arabesques created through repetition. Islamic art was also heavily influenced by the arts of Christianity, Chinese designs and pottery and Persian designs so there are many ideas of what Islamic Art should look like around the world. Nonetheless, to each culture their own ideals, they identify a place as sacred because of their effect of creating the overwhelming experience for the senses. The same goes for the tantric body where the energies are hidden, and your body is your temple and on to the Mandalas that encompass the inner balance of all that is sacred.

Thus, the idea of sacredness in art would be ill served if it were confined to the idea of God or Gods alone if we look at it through the lens of transcendence. Whether you listen to Nusrat Fateh Ali Khan, Abida Parveen, Mozart’s Requiem, the spiritual transcendence Ruskin speaks of is experienced regardless of any religion. Where Nusrat Fateh Ali Khan and Abida Parveen’s Sufism is seen directly related to religion as is Rothko’s chapel they are both expressions of high morality that Ruskin insists that Sacred Art carries. The meditative nature of these art forms consist of the power to transport and transcend beyond the boundaries of religion. They speak to the collective conscience of people around the world and they need not be associated with any specific religion for anyone to be able to comprehend the beauty of these of these art forms and their sublime nature.

Where in Byzantine art we had a heavily draped Virgin Mary and the same face was copied from copies of copies of the first ever Mary depicted by Saint Luke. Perspective and depth were intentionally rejected from paintings so there was no comparison with the human world and the scenes from heaven were depicted in flat figures. You come to the Greek ideals of Gods as athletic figures rendered in fully rounded form and nudity being held in high regard, associated with triumph, glory and moral excellence. This attitude towards the nude was in stark contrast with other parts of the ancient world where undress was typically associated with disgrace and defeat.

Ruskins ideas of a high morality in art is at play in the most subverted ways in the works of contemporary art even today, where morality and transcendence are achieved through highlighting a lack of morality and a single truth in the most sublime ways. Contemporary Pakistani artist Anila Qayyum Agha plays on the senses of Islamic patterns in religious spaces through shadows from sculptures composed purely of patterns taken from Islamic structures, but talking not about the sacred but highlighting what is ‘considered’ Sacred. It is no longer a reverence of the higher being but a comment on the reality the human. Imran Qureshi plays with the ideals of the sacred through color and repetition of patterns from miniature books commenting on the current geopolitical concerns of the country, speaking about the sacredness of human life itself instead of pointing to a higher morality.

The ancient world decided that art needed to have a specific purpose and it was meant to glorify God or Gods. Before formalized religions we had myths and goddesses. In many ways contemporary artists manage to reshape the question of what the new Sacred in Art in our current world should be, which is only the natural next step towards a new truth.

It is Eliade’s insistence that man needs the new sacred to be himself in order to be truly free. It is not to say that he needs to not have a God but it must be that man himself be a standard of high morality and no longer pass on the responsibility of truth to the higher unattainable being. This is where the Sacredness in the arts are headed in a world where the human is lost time and time again until the artist finds him again at least in the arts.

“Man makes himself, and he only makes himself completely in proportion as he desacralizes himself and the world. The sacred is the prime obstacle to his freedom. He will become himself only when he is totally demysticized. He will not be truly free until he has killed the last god.”
― Mircea Eliade, The Sacred and the Profane: The Nature of Religion