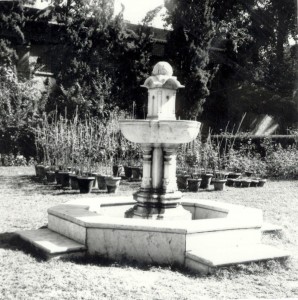 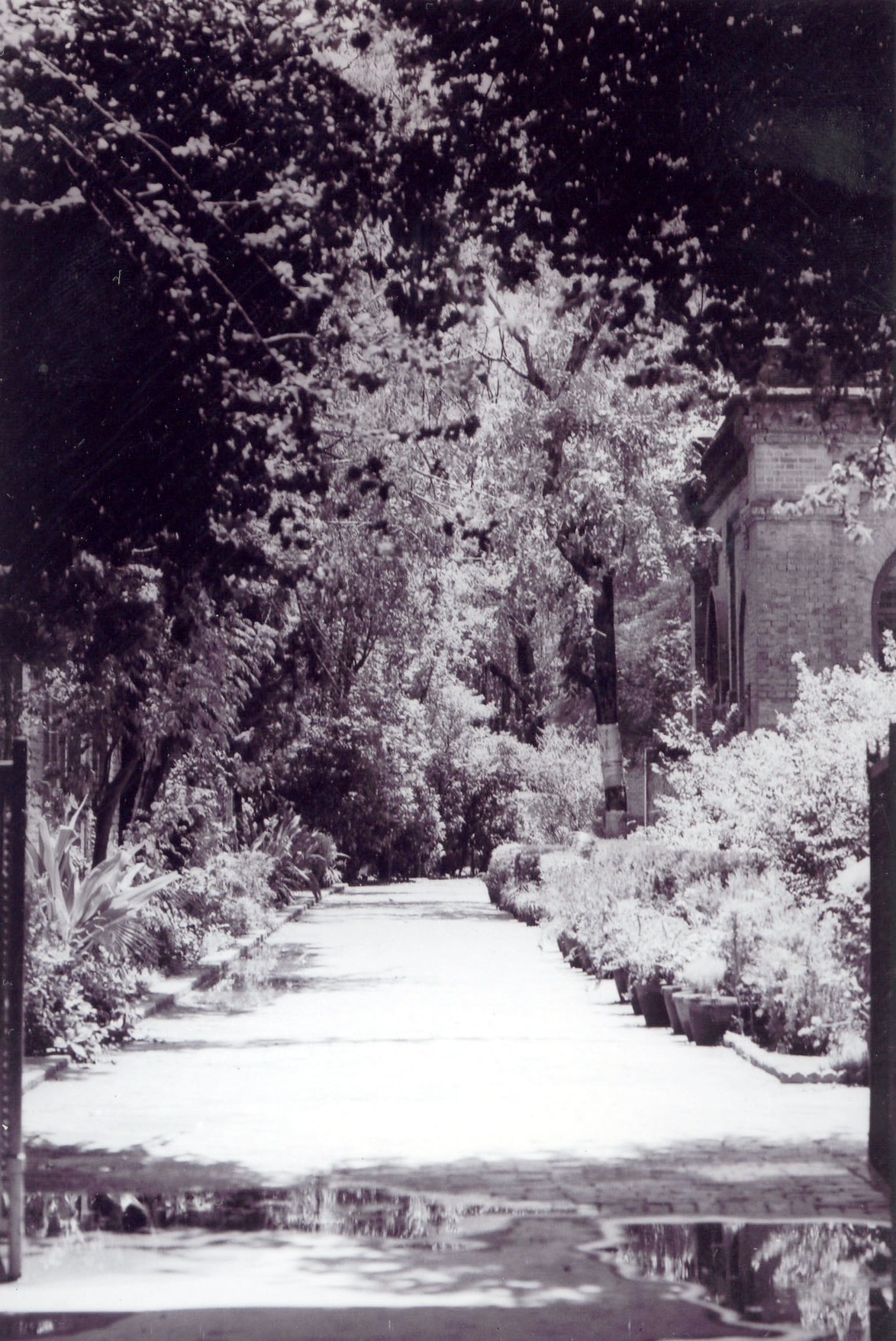 Pahari painting—sometimes referred to as Hill painting (Pahārī, “of the hills”)—were made during 17th-19th century in the Himalayan Hill kingdoms of North India. The life and loves of Krishna as expressed in the poetic works the Bhāgavata-Purāṇa and the Gītagovinda make up the commonest theme of the paintings, together with other Hindu myths, hero-heroine and rāgamālā (musical modes) series, and portraits of hill chiefs and their families. Their existence remained little known and their styles remained peripheral to the development of paintings in neighboring imperial courts of Lahore and Dehli.

However, in the years after the partition of India, Pahari paintings began to receive considerable attention in the national and international art world. The academic studies of  Indian miniature painting, based largely on museum collections in metropolitan and national museums in South Asia and Europe began to grow. These studies of “traditional” Indian paintings which form a paradigm for contemporary understanding of traditional art are set in a disciplinary framework thatinfantalise the indigenous artists as well as Indian arts.

William Archer’s Paintings from the Punjab Hill: A Survey and History of Pahari Miniature Painting (1973) offer one of the succinct formulations of a promise and pitfalls of ethnocentric art history. Through his curatorial work for the British Museums, Archer accounts of Pahari paintings have acquired a profound influence in the art historical scholarships, centered on museums. In Pakistan, Faqir Aijazuddin’s cataloge of Pahari and Sikh paintings reproduce Archer’s model of classifications as well his assumptions of traditional society of Punjab.

In Archer’s writings, Hill States of Punjab, ruled by Hindu Rajput princes conform most closely to the idea of traditional society, where the rulers while maintaining a ‘vigorous life of their own’ had ‘preserved to their full their Rajput culture’. Strict standards of courtly culture where adhered to, and ‘strict codes of feudal conduct prevailed in the region. (Xvii-Xviii). As an attribute of traditional society, where artist as artisan is constrained by the normative structures of patronage, and bound by traditions, Archer portrays Pahari artists as slaves to communal traditions:

‘What is clear is that for most of the Tarkhans and other craftsmen who took to painting, their reliance on patronage precluded true independence. The privacy which a modern painter demands of right, his reliance on inspiration and his cultivation of artistic moods were foreign to the Pahari artist’s mind. As a palace employee or retainer he was not unlike a an expert cook, a skilled trainer of horses, a quiet astrologer or even an affluent clerk. Of thousands of pictures produced in the Punjab Hill States, it is significant that only the merest handful records the artist’s name’. (XXIV).

The historian’s ignorance of artist’s identities is turned into a ground for dismissing their individuality and denying an agentative role to the artist. The anonymity of the artist becomes an alibi for considering the artist as undifferentiated product of their cultural history. Privileging communal ideology over individuality of artists, Archer, as in the following paragraph renders the Pahari miniaturist as unthinking and undifferentiated tools of their respective traditions.

‘Most painters knew their place. They did what they were asked to do and valued their position too much to argue with or defy their powerful superiors. It is no surprise that when, very occasionally, the curtain lifts and we see a painter at work, the person revealed is only vary rarely a friend and confidant of his patron. More normally he is a humble palace servant toiling like an interior decorator and , the in the process producing as if by accident, works of consummate elegance and charm’ (XXV)

The diversity in the painting style is alluded not to the creative inspiration of individual but to his subordination to the whims of royal patrons, who wished to be painted in different styles than their rivals.

On the other hand, there have always been art historians like B N Goswamy, advocating greater attention to creativity, innovation and historical change. He, even while stressing, the heavy weight of traditions, radically rephrased the task of understanding miniature painting by placing the artist rather than the object, at the center stage. His monumental essay on Family as the Basis of Style and subsequent exhibitions has done much to lift the veil of anonymity from the artists of Punjab Hills, which have wider relevance for understanding the creative process of individual artist in non-western cultures. (B. N. Goswamy, “Pahari painting: thefamily as the basis of style,” Marg, vol. 21, no. 4, pp. 17-62 ) Acknowledging the inadequacies of methods of traditional art history, reliance of art historians on museum collections at the expense of field work, his scholarship has built up evidence, however, fragmentary, which goes to de-anonymize the artist from Punjab Hills.

As ardent supporters of modernization of art education, the progressive historians, civil servants and art administrators of early Pakistan drew heavily on a thick text of art historical scholarship for the descriptions of “traditional” society and indigenous artists, not very different from what Archer has produced through his conneseurship, where by an indigenous artist was a Kamin (village servant), an integral part of hereditary exchange relations within the “tribal” village society. Intending to highlight the contrast between “traditional” and “modern” societies, history of visual arts and anthropology in Pakistan recreate indigenous artist as part of oral and pre-literate mode. Their assumed orality turns them into “slaves” to communal traditions, making artifacts according to prescriptive rules inherited from “decaying” oral traditions of past generations.

The acclaimed accounts of “traditional arts” of Pakistan are written in a tense known as the ‘ethnographic present’. It is anthropological device ‘that abstract cultural expression from the flow of historical time and hence collapses individuals and generations into a composite figure alleged to represent his fellows past and present’. The indigenous artists as “traditional” craftsmen are spoken in singular; and in consequence, they are not only interchangeable among themselves, despite aesthetic and ideological variations, but also among the “traditional artists” of entire non-western world. One “traditional artist” or “folk artist” could represent all other artists. ‘From this perspective’, Sally Price argued in another context, ‘the identity of particular artists loses its importance since they are participating in aesthetic production much as factory workers would contribute labor to an assembly line’.

With the anonymity of Pakistani craftsman –artist in the historical narrative, the questions of personal feelings or artistic intention are foreclosed. With the loss of individual identity, the indigenous artists and their artworks are transported into the discursive space of “tradition” and “custom”. Variously invoked as “primitive art”, “folk art”, “decorative art” or “traditional art”, the indigenous art was made to appear as medieval, backward looking and static. In the salon de refuse of “craft”, “folk art”, or “primitive art”, the anonymity of the individual artist was the condition for the existence of a “timeless” tradition.  What united these otherwise divergent perspectives on visual arts is the exclusion of what were described as “folk arts” from the salon of individual creativity and historical time and associated with age-old traditions and customs. The interplay of tradition and modernity became not a matter of careful empirical investigation rather of logical deductions.

Based on the logic of binary oppositions, the distinction between art and craft postulates cognitive and aesthetic differences between the works of art and craft.  Working as an active discrimination, it operates at conceptual as well as at social levels. For instance, art has positive evaluative connotations, which craft lacks. Art is considered aesthetically superior to craft, and the later is relegated to the lowest cadre of “artistic” existence. Art is for its own sake or has an aesthetic use and craft is utilitarian and created for only for the sake of selling. Art is taught in modern, secular schools, exhibited in galleries and museums, discussed in academic journals, and reproduced in popular magazines for the refinement of public taste. Craft is left at the vagaries of market forces, without public support or state patronage in education or in art practice. At best, it is packaged as shinning emblem of “tradition” to be museumised in history, or marketed in the west as culturalexotica. The fate of those who are dubbed as craftsmen is no different from the arts, which have been pronounced as crafts. It seems as if the craftsman, is a step relation of artists, lacking design aesthetics, but can be praised for the workmanship and hereditary sensibilities. Artist is the crown prince of the cultural aesthetics and a divine carrier of creative sensibilities.

Contrary to the idealized descriptions of indigenous artists as craftsman, the canons of contemporary art criticism and art history are anchored in the biography of the individual artist, which forms the basis for identifying a succession of artistic movements. It is the biography of individual artist that serves as the guiding light for identifying individual styles as well as defining the currents of modern art movements.  From Zubaida Agha to Anwar Saeed, the story of visual arts in the late twentieth century is presented as a ‘mosaic of contributions by creative individuals whose names are remembered, whose works are distinguished, and whose personal lives are related to a particular historical period’. From Abdur Rehman Chughtai to Shazai Sikander at the turn of the twentieth century, the historical chronology of Pakistani art is recounted, following the guiding canons of European “fine-art” history, in the temporal sequence of successive schools unfolding ‘an orderly progression of styles and aesthetic concerns’.

There is a growing realization in the disciplinary quarters that historical and anthropological research since the post war period was accomplice in the post-colonial project of re-creating a “traditional” South Asia. It has come about, ‘with the rejection of the notion that such categories such as nation, tribe, culture, are as Eric Wolf put, it “internally homogeneous, externally distinctive, and bounded objects”’. However, this realization is slow to emerge in the art historical scholarship in South Asia, where the concept of “tradition” is theorized as empirical referent to pre-colonial cultural past, and a polar opposite to “modernity”