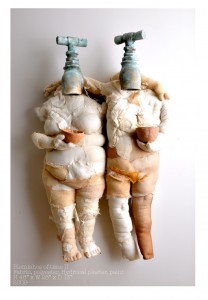 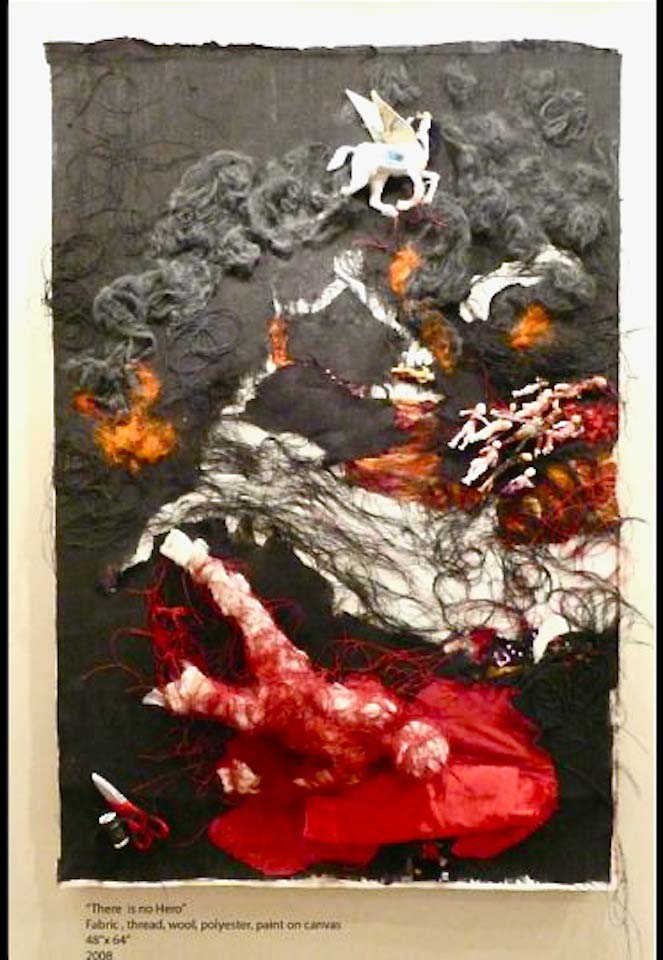 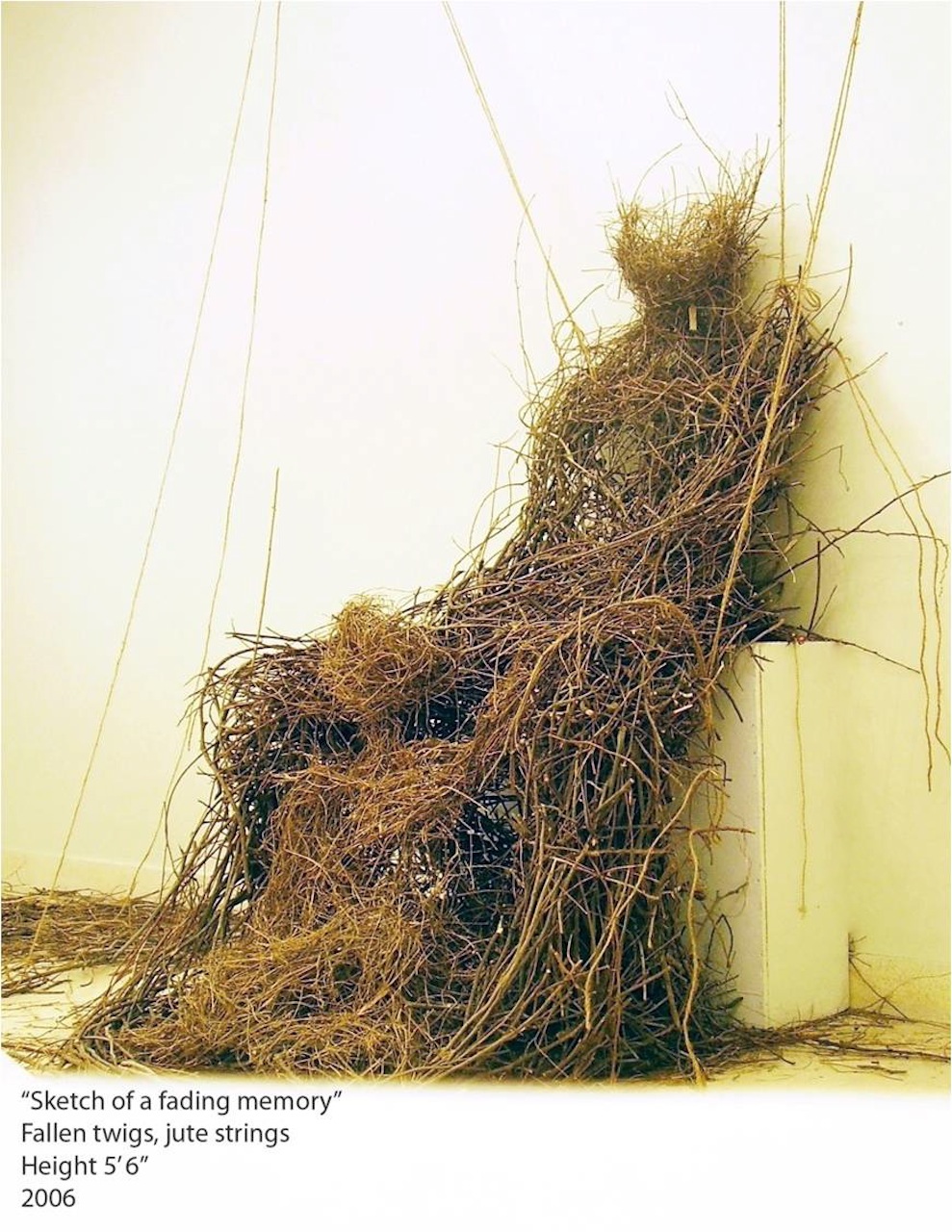 Ruby Chishti discusses elements of her visual vocabulary and talks of her take on feminism.

ArtNow: The idea of fabric and stitching seems organic to your praxis. Is there a personal association with fabric and needlework or a collective one?

Ruby Chishti: To me sewing is not merely an act, it is an attitude, it is relating oneself to an activity that creates and mends at the same time. Growing up, I was denied objects of desire by my parents just as all other kids — sometimes it was an outright ‘No!’ and sometimes a more placatory ‘Next time!’ Most kids would cry it out or patiently wait for the next opportunity. I learned to make the things I wanted for myself. Needle and thread brought solution and happiness early on as I learned how to sew, make and mend. I made dolls for myself and later I stitched my clothes and would even use old Rexene bags to make shoes. This activity shaped my general approach towards life; it taught me not to discard or waste things quickly and instead to strive to mend and keep and the lesson extended to life, to relationships, associations and so on.

I chose deliberately to extend the craft and skill of sewing, considered to be a low art form, into my art practice. It is an idea derived from the Sufi way of life in which humility is goal much coveted. Male Sufi poets would adopt the female voice because the woman was considered inferior in society.

AN: Crows are an integral part of your imagery. What do they signify? Is that significance universal?

RC: The color black is abysmal but also signifies infinite knowledge. I fabricate crows from scraps of old and worn fabric that is already imbibed with associations. Thus these crows become a witness to history. For me they are resilient, unchanged by evolution and thus survivors and companions. Their presence is very comforting to me. As the Compendium of Materia Medica states, crows are kind birds that feed their old and weakened parents, they relish and treasure the sages and their ancestors. Their ability to survive is intriguing. In our society cawing crows are considered harbingers of guests. They carry memories of the past. As age-old mythological characters, their presence in pristine gallery spaces helps to transforms it to a domestic space… I like to create ‘atmospheres’ through my installations.

AN: There are many occasions in which you have used the form of the newborn, not kids or toddlers but babies. What is the relevance of this metaphor?

RC: In Pakistan, like many other societies, the social pressure on women to bear children is inflexible and ruthless, although the decision to have a child is hard even as an individual choice. In a close knit society, babies are somehow considered to be the integral connectors of family, the extenders of lineage and the reason for the woman to exist. Without children, the woman’s life becomes almost irrelevant. In depicting babies, I address this narrow viewpoint and question the role of the woman in restrictive societies where she is associated with physicalities of existence. I have used the image of babies in different contexts; sometimes in relation to a society that is obsessed with the male offspring; as armour when I made them with sanitary napkins, referencing the idea of the child as a shield or armour for protection against societal criticism.

AN: There is an underlying sense of memento mori in your work. Life seems to coincide with death at all levels. Is that a misguided interpretation on my part?

RC: Most of the works draw upon the universal themes of love, loss, of being human, the desire to protect life, construct as well as embrace the unavoidable. My art practice has played a significant role in my ability to gain a better understanding of life and also to confront and overcome the challenges I faced. Most of my early works were autobiographical in nature and spoke of the ephemerality of life.

I view my art praxis from two directions; the conceptual and the visual. My work starts from beyond the narrative and is affected by the most intense experiences in my life; of being a care giver for more than a decade and before that of surviving the loss of close family members. I have often used organic materials like dry branches and twigs and straw and given them new shape, or made objects out of sanitary napkins. But the evidence does not, or should not, point towards death but rather towards creating or making afresh. It is about the courage to create something whole and positive even from the impossible.

AN: How has life outside Pakistan changed your perspective in your work? As viewers, we don’t notice a radical shift in vocabulary or even materials but there has to be some distinguishing modifications, either physically or psychologically in your outlook. Where should we look for these?

RC: I think my viewers are very intelligent and observant, they noticed the smallest changes in my work that occurred from time to time. After moving out from Pakistan one would see the strong presence or absence of gravity in my work. Translucency of stocking, sanitary napkins works, and millions of spaces within a larger form that is very obvious in my twig pieces or works made out of wire mesh address the same shift.

AN: We have talked about this before but for new audiences, tell us if you consider yourself a feminist artist. When writing about feminism in art in Pakistan, your images came to my mind immediately but that could be a personal point of view. Meher Afroze is firm in her refusal to be categorized as feminist while others like Naheed Raza are resolutely entrenched in the feminist ideologue. What is your stand?

RC: I look at the idea of feminism differently. Women born and raised in advanced countries cannot deny the reality that women all over the world, in spite of their large numbers are treated like second rate citizens and considered weak and powerless. Some may argue that a large number of men are mistreated and abused as well. But the difference is that women are victimized in their own homes by their own families. To me, feminism is about listening to the voices of the powerless whoever that may be; transgenders, homosexuals or people of color. Although my earlier works like: ‘There is no Hero’, ‘My birth will take place a thousand times no matter how you celebrate it’, ‘ I love my prison, my prison loves me’, ‘Guardian Angel’, ‘….and then I buried my pride along with you’, are based on very personal experiences, their making and visual language and schematics elevate them beyond particular categorization and hurl them into a wider universe where there is injustice at all levels and not just towards a focused faction of humanity. These labels are consigned by powerful influencers and are then carelessly attached to works and individuals.

There is no doubt that my earlier works had a strong personal feminist voice and that they were autobiographical works connoting my own hardships. The classification wherein you could be deprived of civil liberties because of gender is questionable and we need to investigate how these myths or notions become cultural values that affect the lives of many individuals. It is almost as if being born a female is less unacceptable than being transsexual. How do you see such societies? In Pakistan, the masses, whether male or female are powerless and deprived of basic human rights and liberties and they suffer collectively. Discrimination or negative attitudes… How can societies that discriminate on the basis of gender ever progress?

AN: Do you feel the need to show in Pakistan? Is that even relevant to your career objectives anymore?

RC: Art belongs to people, wherever there is an audience for the art it should be shown. I have been constantly exhibiting my work in Pakistan since 2006. My art practice is deeply rooted in the region from where I only recently departed so it is very relevant to share with the audience who understands the visual vocabulary more profoundly.