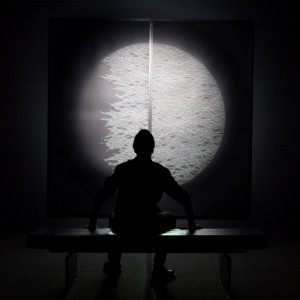 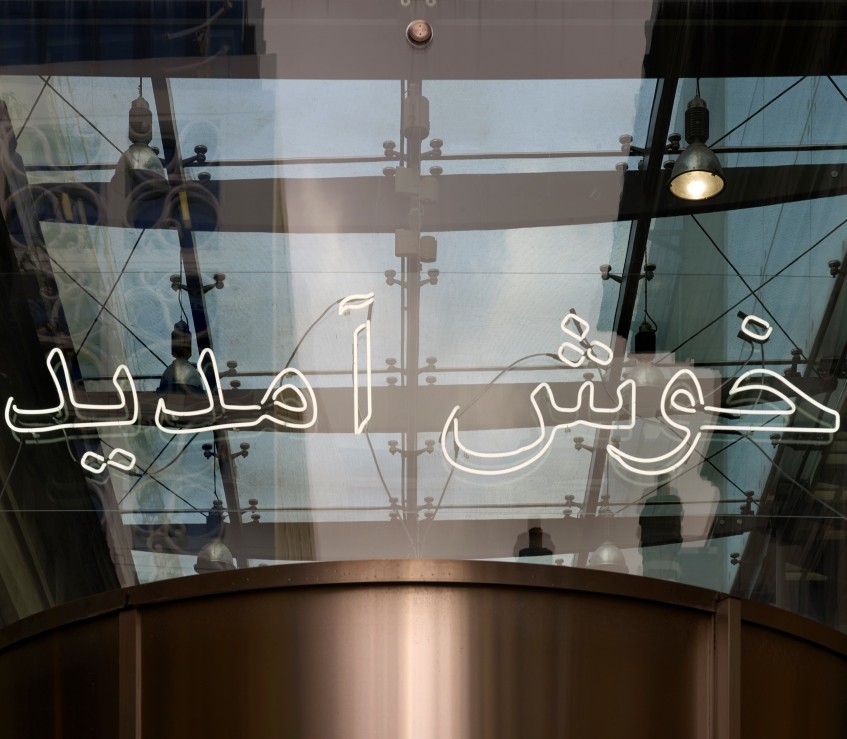 Just Hang me on the Wall, I Will Show you How to Dance!

In the poem “I Would Like to be a Dot in a Painting by Miro” Moniza Alvi’s dot celebrates its individuality within a painting by declaring that it is more than happy to be an imperfect circle. Yet as I observe Waqas Khan explaining exactly how he sometimes has to time his breathing and hold his pen with both hands to aim for the attainment of that perfect dot on paper I imagine if Moniza’s dot would ever want to reassess its existence.

Looking at one of Khan’s works- a sea of flowing and ebbing undulations composed of marks lovingly placed yet moving in a unique synchronicity I imagine it would happily and willingly relinquish itself just so that it can gleam and shine in his universe. A better word for its submission would be “Fanaa” or annihilation, a concept in Sufism where one eschews the physical world and is overcome or consumed by the love of Allah.

Call this musing what you will but Khan’s own beatific expression as he gazes at his universe on paper is like a brief glimpse into a very personal experience- one almost feels like an intruder walking in on an intimate moment. He is unable to contain his passion about his work though as he spreads out his arms in the pristine domain of his studio littered with works and exuberantly declares

“Look at me. Can you not tell that I am just LOVING IT!”

The international art world has responded to him with equal enthusiasm as his works are part of prestigious public collections at the British Museum, the Victoria and Albert Museum, in London (UK); the Deutsche Bank Collection, Frankfurt (Germany); the Kiran Nadar Museum of Art and the Devi Foudation, both in New Delhi (India)and Kamal Lazaa  foundation Tunis. In 2013 he was shortlisted for the prestigious Jameel Art Prize at the V&A.

Recently Waqas has won the Art Spectrum award South Asia 2017 in the category of visual arts.

Success and accolades have not affected his modesty though and he has no qualms about recalling some milestone moments that became game changers in his struggling career.

He recalls with a laugh “When I had my first Solo Show in Karachi at Canvas Gallery, it was held in Ramazan when no one does a Show. Only two people came to my opening!  And that is how it started.

“Just Hang me on the wall and I will Show you How to Dance!” is what I said to them as I pitched for a demand to have a Solo and stood there with my work around me.”

Yet as we discuss the multitude of descriptions that have been used to define his work, Khan is wary of what he calls labels and cliches’ and calls for a more open assessment that can have multiple readings.

“I am bound to read into my practice by seeing similar examples around me or in past. My work is abstract. I am a believer. I am not a Sufi; they and their philosophy of life intrigue me though.”

“I come from a place called Akhtarabad. It is my home town.  The village is a place that teaches you the importance of every single person around you. As it is a small community, everyone is concerned for each other. If I look at my work, that has left an imprint, I begin from a small unit and conclude it in the form of a larger whole. It can then even be read as an illustration of that environment but this is all relative.

There cannot be one reading. When I started working, topics like IsIamophobia and terrorism were in vogue. And then there was my work. I was no one. I didn’t have any big ideas. All I had was simplicity, patience and I worked for this. “

Khan’s emergence and ascent in the art world is in itself a wonder story whose plot is worthy of a novel by Paulo Coelho. Infact the lines from his book “The Alchemist” hold so true for Khan he risks sounding like an easy cliché’!

“And, when you want something, all the universe conspires in helping you to achieve it. It’s the possibility of having a dream come true that makes life interesting.”- The Alchemist

Although Khan’s career took many interesting turns after college that would make any art school graduate go green with envy, the universe still took its sweet time in helping him get started and he admits spending years in NCA feeling that something was amiss.

“ I had heard about NCA when I was in Islaamia College where I studied and so I applied even though I knew nothing about art I Majored in Printmaking . It wasn’t about me coming to college every morning then, I was more interested in having fun…so I was just performing the motions when it came to NCA. Where I come from, people become doctors and lawyers. I was somehow the guy who never knew anything about anything in NCA, I guess I just felt something was missing.”

But then he starts to speak haltingly in spurts with a sort of wonder and bafflement in his voice as he relays the story of how “the magic that happened” as he puts it.

“It happened in fourth year:  I just started working! There is no other explanation I think. Infact I liked what I was doing so much that I ended up spending 15 to 20 days in NCA working continuously! The trunk of my car had become an extension of my studio by then, I stored my work there.

I was like this person with no direction, I was like an animal and then I started making this art which was so different to my nature and no mean feat to pull off but it just shifted the whole axis of my existence!”

“Buying, selling? The gallery system?? I didn’t know anything! I was like a fish out of water and baffled everyone with my naiveté by demanding a Solo Show the first time I visited galleries! “ he guffaws as he says this.

“And pricing? I was having too much fun making the work to even care till they asked me!” he recalls fondly.

“Works that travel with me wherever I go: I call them writings. I also make other smaller works that I call “keys ” .The larger works pick onto some of the keys, though they remain different. The process though, still remains spontaneous and finds its own course. All my works leave curious, questionable areas for me which perhaps keeps me going. My work is plain abstraction. It works on its psychological impact on the viewer. Because it is almost imageless, the mere impact could be juxtaposed and curated in a manner to render a specific meaning from it.

Since I am referring to space here: architecture has also often inspired me. Rhythm is a very important part of my work-there should be rhythm in what I make. Like breathing in and breathing out. So I love the harmony, symmetry, proportions of architecture and I make it a point to visit these wonders wherever I travel.”

Khan also talks about how scale has been an important component of his work and credits prestigious Residencies such as the Krinzinger Projecte/ Gallerie Krinzinger in helping him to evolve.

“They listened to me, gave me freedom and helped me blossom, I have nothing but respect for them!”

His series “In the Name of God” exhibited there was evidence of this as the scale and impact of his work changed. Yet Khan is on a quest where he feels it is important to make work in response to his changing environment.

“I was very unsettled after my “In the Name of God” series I executed at Galerie Krinzinger and was looking for a change of sorts. My white on white series “Name Me White” 2017, Manchester Art Gallery emerged from constant visits to the space and its spatial understanding. For me it is very important formulate a dialogue with the space I am exhibiting in and what is in that space but people?  I must have visited the space four times when it wasn’t even my Show and the curators were pretty baffled!

I struck up conversations with people in the gallery way before I even sat down with the curator to hash out the details of display. To get to know my space, to breathe in it is very important for me- it is even a precursor to me deciding what turn my new work should take so it can enter that space. That is how my work “Doors” also emerged from the arches of the Town Hall Building that I could see from the Gallery itself.”

Khan is adamant when he says that he wants to make art for simple reasons: communication and connection.

“ I’m talking about the language of “making”. I have not just exhibited with South Asian artists with South Asian concerns but with artists from all over the world and under different themes- my work transcends boundaries because I want to connect with the rest of the world. I only needed a common visual language”

He isn’t hesitant to change that language (literally) and adapt to other mediums if needed. We talk about the heartening response to his work “Khushamadeed “.

“I use to observe people from all communities from the   Gallery: Arabic, Persian, Sri Lankans especially South Asian taxi drivers-they would never enter the gallery space. No one from these communities was part of the experience. So I thought let’s start by playing with one word- one word in neon light to build a connection so that they too can understand or feel something. I received such a great response with the curator writing an email to me saying the influx of these visitors has gone up since encountering the sign.

We may speak in many languages and come from different cultures but we feel the same emotions. I wanted my work to leave them with the same feeling if anything.”

That credo has certainly come to define him.