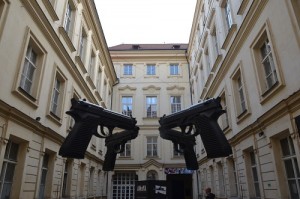 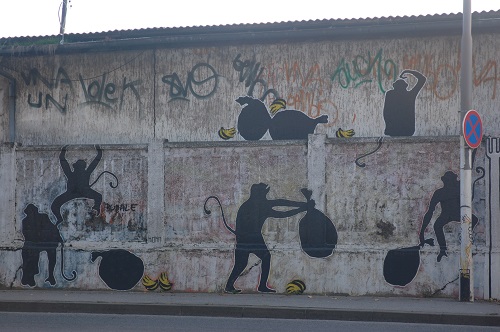 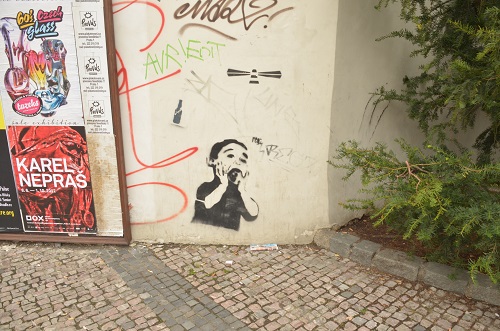 Prague: The City As Art Space

True to its Bohemian antecedents, the city of Prague in the Czech Republic continues to be a vibrant showcase of artistic traditions and styles. Following in the footsteps of socially unconventional and unorthodox “Bohemian” artists, writers, journalists and musicians such as Mozart, Kafka and Alphonse Mucha – renowned for his “art nouveau” paintings – are contemporary artists, designers, architects like David Cerny, Jan Kalab and Adolf Loos. Such creativity, especially unleashed by the anti-communist “Velvet” Revolution of 1989, also embellishes the city’s architectural styles from Gothic to Baroque, Art Nouveau to Ronodocubism (a branch of Cubism which is famous only in the Czech Republic) and currently to Modernism, all of which have merged perfectly throughout the city.
The most famous and prolific among contemporary Czech artists is David Černý, who is renowned for his controversial works such as the crawling babies on the Zizkor Tower or Radio Tower, which was constructed during the communist era, with the installation of crawling babies added in 2000. The tower, according to many Czechs, is the ugliest building in the city, and indeed does stand out like a sore thumb. But the view from it is spectacular and the addition of the babies crawling up the tower give it a uniquely eerie and surreal character.
Černý also has a permanent exhibition at the AMOYA art gallery, including the pieces Shark, and Guns. Shark, again a controversial piece, depicts Saddam Hussein in a water tank in his underwear and a rope around his neck and wrists, the sculpture floats eerily in the tank like a laboratory sample. It is a parody of Damien Hirst’sThe Physical Impossibility of Death in the Mind of Someone Living, which features a tiger shark preserved in formaldehyde in a water tank. Guns includes 4 large pistols suspended in air and aimed at each other, which make various sounds but do not sound like gun shots. The use of space is interesting as it is surrounded by the art gallery on four sides, and the building itself is an old Baroque Palace.
Yet another controversial piece of Černý’s work in the city is a sculpture of two men urinating in a puddle, surrounded by quotations from Czech literature, which is situated in the Malá Strana. The piece is situated in an elegant Baroque building, which juxtaposes starkly with the vulgarity of the sculpture. In an interview with The New York Times, Černý describes the piece as “an apt commentary on the self-deprecating Czechs, who have gritted their teeth though centuries of invasion and occupation…and seldom winning at anything”.
A striking and unique art exhibit is the Lennon Wall which epitomizes the spirit and intensity of the Velvet Revolution. Here the people of Prague and visitors to the city have expressed their desire for peace and love by writing and drawing graffiti and lyrics of songs by the Beatles. The wall, which is covered from top to bottom, is like a vast mural voicing the younger generation’s resentment against the authoritarian establishment, and is in a way more like street art, except nothing is washed away or covered up.
There are also other examples of street art in the city, decorated over buildings, tunnels, and over by-passes. They are usually massive eye-catching murals, which bring out the charm in an old street, so on one side you have an old Baroque building and on the other, street art. One such mural is at the Národní třída, a high street with grand roads and public buildings. The wall is painted by street artist Jan Kaláb and his colleagues. It’s a public space that can be painted on, as they get permission to do so. Other street art works are imitations of Banksy’s work, defying and mocking the establishment or touching on social themes of the times. Another street artist, Skarf, explains street art in Prague: “It doesn’t respect the rules of materialistic society where everything that’s paid for is what’s allowed. It’s a free art form that can’t be controlled, that can stand up to the commercial spam on the street. Much was controlled during the communist era, and now since its independence has brought about the artist’s freedom”.
The thriving contemporary art scene enriches the past glories of Prague: the Old town square with its fairy-tale castles and ornate buildings; the Charles bridge with most elaborate yet gruesome sculptures; the famous 10thcentuary Astronomical Clock, with Gothic-type sculptures popping out at every hour; Baroque churches; Romanesque and Art Nouveau buildings such as the Municipal House; the Villa Müller, a classic Czech Cubist delight; and the Dancing House, built in honor of famed American dance couple, Fred Astaire and Ginger Rogers, with its futuristic design that sharply contrasts with its surroundings.
The artistic diversity of Prague makes it truly one of the most unique and beautiful cities in the world – a city that is a collective and living art space – in the best Bohemian tradition. This artistic tradition, suppressed for decades during the Communist era, has now burst forth after the Velvet Revolution and is being expressed through diverse forms including paintings, sculpture, architecture and even free-spirited street art which seeks to compensate for all the lost years of creativity.