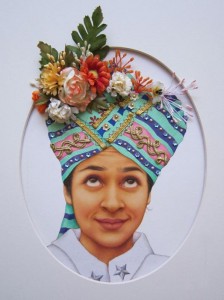 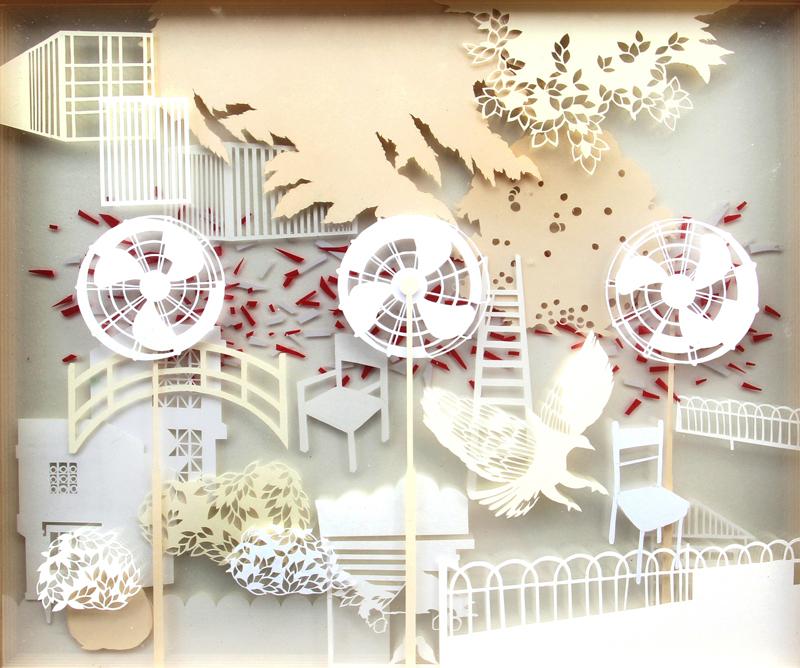 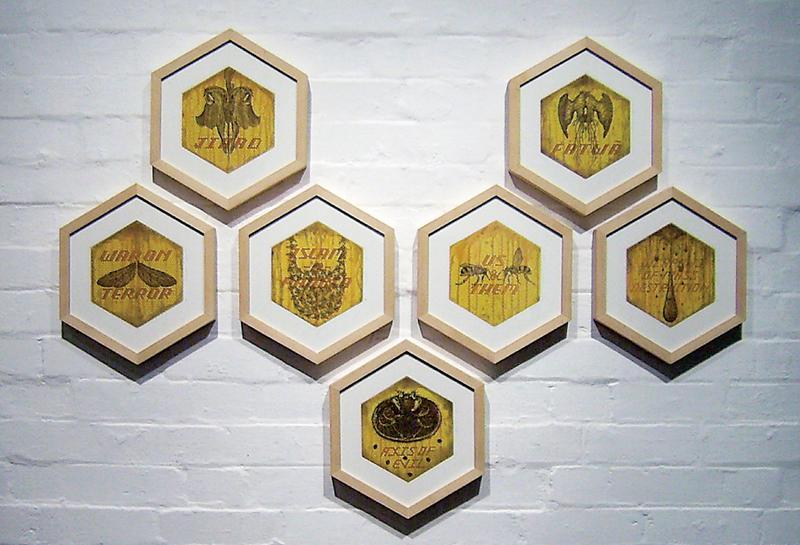 On entering 35 Great Jones Street, I often encounter the familiarity that one longs for in foreign lands. The theme of the show, named Mere Humd(r)um, at the Aicon Gallery in New York resonated these feelings. The exhibition comprises of works of 12 contemporary artists from Pakistan. The selected works respond to the present political and social issues in the country and within this theme one also encounters the reiteration of a beaten down image – objects of destruction juxtaposed with symbols of beauty – guns and suicide jackets enveloped in their floral garb. While some artists use a direct approach to address the political situation in the region, others have employed a more subtle language.

The show features many exciting works by contemporary miniaturists of Pakistan, including Shoaib Mehmood, Sara Khan, Amjad Ali Talpur, Rehana Mangi and Aisha Raheem. The exhibit is punctuated with Cyra Ali’s provocative feminist sculptures of entwined female limbs. Roohi Ahmed alludes to the events of partition of the region through simple visuals constructed out of sewing needles. There are multiple ideas of religion, war, capitalism, politics, cynicism and perhaps fantasy that are layered in Abdullah Syed’s installations. Syed has effectively used his repertoire of currency notes and knife blades to create prayer rugs or magical flying carpets fashioned out of the drone shaped objects. These objects seem to cast a dreadful shadow on helpless populations spiraling them into an endless battle with violence. On paper, he has embossed blades creating popular Islamic symbols from the prayer rugs such as floral patterns and Ka’bah – God’s House in Makkah.

Syed’s Buzzwords remind us that many artists in this show have tapped into the buzzwords, which the others associate us with. One will also argue with the tone of the press release portraying a lack of normal life in Pakistan. In fact, it is precisely the everyday and the ordinary – the humdrum – that holds the nation together in trying conditions. In this context, Seher Naveed’s work particularly stands out due to its vibrancy and cut paper decorativeness. She creates dream-like scapes with overlapping elements of inside and outside spaces. There is frenzied activity in ‘Between the Event and its Interpretation’, as one would feel when a fan is switched on at full speed with loose paper flying all around. There is not a soul in sight but plenty of architectural and furnishing details, some from an era gone by. Naveed’s constructed images are the multi-layered, untold stories from everyday life of a Karachiite.

Similarly, Hasan Mujtaba tries to make sense of the everyday strata of life in the videos I Pass by This Way Every Day and Physical Training. He seeks the truth as he focuses on his life in relation to the world around him. His understated videos are a desire to know oneself better without the presence of any sensational objects, images and titles. On the other hand, Ehsan ul Haq literally brings everyday objects into the gallery. The air compressor and pedestal fan demonstrate the basic functions of these devices. The inflation and deflation of the balloon almost become a metaphor for human machine, which gets tired and older with each passing breath. These machines seem to be trapped in their mechanical functions unable to break the cycle.

Iqra Tanveer is another artist who has juxtaposed the interior and exterior spaces in her work Reality Scape for Web. One may have often seen wallpapers with large landscape image pasted on interior walls of guesthouses or hotels in Pakistan. But Tanveer’s work is almost surreal – an alienating experience. It raises multiple questions whether the electrical socket, doors, windows, and shelves are really set in the landscape, are there mountains behind these walls or what is real and unreal in this image? Is man-made real or the man-made image of the landscape real? There is something potent about the presence of disposable objects and electronic devices in this constructed reality. Both Tanveer’s and Haq’s works bring to mind Walter Benjamin’s text which states that the humankind has not matured along with technology. Unable to employ it effectively, the advancements in technical devices, in speed, and in the sources of energy result in their unnatural consumption, and this is found in war. Humankind has become an object of its own contemplation; “its self-alienation has reached such a degree that it can experience its own destruction as an aesthetic pleasure of the first order.”

Since the pain of domestic political violence or West’s policies in Pakistan and the region is felt by the entire nation, it is no surprise that artists are increasingly responding to such situations. As we witness the growing criticality in art, we also know that majority of the population live a somewhat peaceful life distanced from the direct ravages of wars going on in the region. And one wonders if some artists are reaching out to others so that the voice of those unheard can be represented or are they making a wrongful trespass into the lives of people who are the worst sufferers of these wars.  After all there is some form of violence, de-contextualization and miniaturization involved in all forms of representations3.

While regression of the society in Pakistan is apparent everywhere, it is the progress and constructive events that emerge from this regression that remain out of the general debate. Perhaps it is the energy generated from this dichotomous situation that the communities including artists plug into to move on with their normal lives. And it goes to Aicon’s credit to continuously bring part of these positive energies to this side of the globe.

Sadia Salim is presently completing Ed.M. in Art and Art Education at Teachers College, Columbia University. She is a ceramist by profession and Assistant Professor at Indus Valley School of Art and Architecture, where she has taught for many years and coordinated the Ceramics Department.