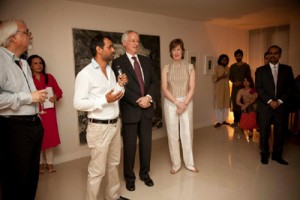 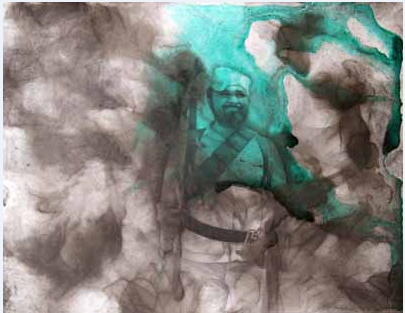 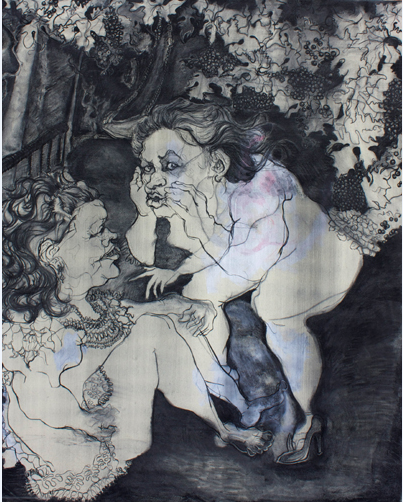 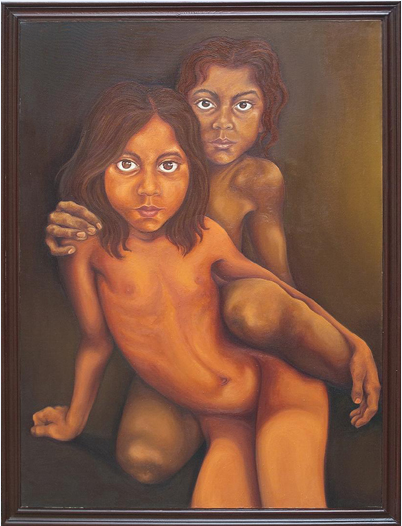 Fresh work radiating a vibrant energy would be the words to describe the exhibition at the outgoing US Ambassador’s residence in Islamabad in the third week of July. Through Naeem Pasha, the director of Rohtas Gallery, the ambassador’s wife Dr. Marilyn Wyatt was able to execute her wish to use the residence as a display space for Pakistani art.

Curated by miniaturist Imran Qureshi, the works were not limited to his field of specialisation. Familiar with the studios of students and graduates from various departments at NCA, where he has lectured since 1994, Qureshi looked for art that encompassed a range of genres: sculpture, print, painting, drawing, photography, and film among them.  Works which met his criteria didn’t have to conform to a dominant theme, and prior to the exhibition, the curator’s main concern was that it might look ‘like a meena bazaar of art.’ But when hung, the works created a narrative that tied the diverse elements together. This began at the entrance with Imrana Tanveer’s Post Betrayal, which created a canopy partially concealing the front door. It continued into the foyer with its video installation and soft-sculpture figures and body parts by Mizna Iftikhar, which formed another partial curtain, faced across the room by Shanzey Mir’s evocative, almost androgynous figures and complemented by miniatures and large-scale drawings.

When Qureshi first arrived at the venue to install the work, the residence was filled with furniture. His first action was to empty it of everything but the grand piano, and floor and tall table lamps which were eventually arranged strategically on the ground, with a string of track lights installed along the ceiling. The final effect, with the art work set against the white walls and curtains, was of light and air, approximating gallery lighting requirements but generating an intimacy only possible in such a setting, and complemented by live music.

What was delightful about this exhibition was the lack of pretension in the work. Qureshi’s aim was to collect works of art which were as sophisticated in technique and execution as in concept. This may stem from his rigorous training in miniatures, but in truth it is essential to all art. The works didn’t have to be complicated, but the artists had to demonstrate skill in their treatment of even apparently simple ideas.  Shoaib Khan’s ‘Tongue in Cheek,’ for instance, featured sets of two plates, an etching plate and a screen print, printed over one other, key to the  success of which was positioning. The quality of the work itself, a comment on Urdu and English and how they compete in a culture which cannot quite decide which should have more importance, is witty and buoyant. Wit and whimsy were present in other works too, such as Maria Khan’s large charcoal on canvas drawings depicting blowsy, provocative middle aged women: they are almost a bacchanal. These are not the women we are used to seeing in paintings. They are no beauties, but they are full of life, and rejoice in it. Imrana Tanveer’s ‘All Roads Lead to None,’ a woven composition in thread and paper, is another tongue in cheek statement. Each small flag is slightly different, each right corner is occupied by a symbol, such as an upside down crucifix, a petrol tank with the needle pointing to empty, a missile, a dollar sign. One flag has been recomposed so that the crescent and the right side are made up of stars and stripes. Aneela Khursheed’s Mirror Mirror on the Wall, a series of works featuring broken pieces of mirror arranged on canvas, which give the effect of floating to and away from one another, is simultaneously decorative and symbolic. Sayhr Syed’s intricate, very personal mixed media ‘boxes’ stem from her fascination with doll houses and with keeping a journal recording her impressions of life and people.

With over twenty artists, it is not easy to critique all the work on display. Briefly, the miniature paintings demonstrated unusual handling or themes, as in Ahsan Jamal’s smoke painting and pen drawing; and Nabila Yasmeen’s work, with its naive quality, depicting ordinary people and their ties to their surroundings, such as a woman partially encased in a square composed of leaves. Noor Ali Chagani’s deceptively simple block like compositions have dealt with themes of constraint; this show included a burlap covered book studded with large fragments of coloured glass titled In-secure. The photography entries by Nashmia Haroon, nightscapes of old Lahore dominated by a flood of motorcycles, captured the atmosphere of this exploding megapolis, while Sadaf Farooq explores the lines and curves of iron and steel in her photo etchings.

Today’s artists have a wide array of materials to choose from, from the traditional to the modern and unconventional, found or household objects. How they reinvent these is where art comes about. Necessary to all this is introspection, which this group of emerging artists making post thesis work appear to have practised. At gallery shows one feels that artists have begun to lose this, perhaps because of exhibition schedules and work pressure. One hopes that this group keeps it.