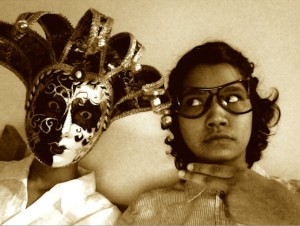 The Kooky Indian Girl Who Once Lived in Lahore

Saira Ansari talks to Vidha Saumya, an Indian artist who came to study at BNU, Lahore. By her own admission, Saira Ansari, artist, critic an

Saira Ansari talks to Vidha Saumya, an Indian artist who came to study at BNU, Lahore. By her own admission, Saira Ansari, artist, critic and researcher, engages with her world in a whacky far-off manner with her s.a Project Blog, being what she calls “an insolent art critique project aimed at encouraging critical debate and pointing fingers at the non-progressive practices and ethics of commercial art galleries/art institutes in Pakistan.”

This article features excerpts from the original Q&A published in the s.a Project Blog: The kooky Indian girl who once lived in Lahore.

The artist I am featuring today is a strange woman possessing a delicious way with words and scribbles. She is constantly muttering odd sentences that spin fantastic tales. Later, she draws them. Vidha Saumya came to Lahore from Mumbai in search of a place she had only read about, and stayed on in the city for almost a year in 2007/8.

After finishing a double BFA (Painting) from the J.J. School of Art, Mumbai, followed by a diploma in Visual Communication Design from the Srishti School of Art, Design and Technology, Bangalore, Vidha came to Pakistan through a South Asian Foundation scholarship and joined the Independent Study Programme at the Beaconhouse National University (BNU).

On ending up in Pakistan and the BNU experience, she says:

VS: Manto, Ismet Apa (Ismet Chughtai) and Asghar Wajahat are my most favourite writers and their writing was my first introduction to Lahore. Apart from the fascination and shared history, it is the sense of impossibility that made me desire going to Pakistan so much, especially Lahore. In 2007, SAF – South Asia Foundation, sent a scholarship circular and requested interested female students to apply.

The BNU experience was exhilarating at many levels. I signed in for three theory courses with Julia Ahmad – Iconoclasm, Goya, Angels and Devils in Film and Art. These courses exposed me to a very unique method of learning, presenting and understanding subject of much social and visual relevance. I did not have to attend class every day, which gave me the opportunity and freedom to work towards four city-based projects. I also taught History of Art to 2nd year Jewellery and Architecture students and worked briefly at the Human Rights Commission (Child Rights Unit).

BNU as an institute repeatedly presented opportunities to know the city and its people. I was always unsure and not too aware of my position and presence at BNU and didn’t really make any friends during my stay there. I mean, I was friendly and people were friendly too (mostly). However, I must also mention the support I received from the faculty at BNU. Professor Salima Hashmi, Rashid Rana, Sadaf Chughtai, Huma Mulji, David Alesworth, Gwendolyn Kullick, Risham Syed, Nadia Khwaja, Farida Batool, Malcolm Hutcheson, and Julia Ahmad have been very encouraging and appreciative of all that I was doing at the institute. They came for my exhibition openings, offered help and were very forthcoming and helpful in making me realize the few projects I did there. This experience really enriched my work and made me feel very special. It also drew my attention to the fact that there are few Art schools in India that have such dedicated professionals as teachers. Learning gains such a quantum if we have such facilities and opportunities.

About the recent show ‘Love Charades’, she says:

VS: The drawings in Love Charades have come a long way from being very coy with composed shy poses presented in the exhibition Song of the Sirens. ‘Song of the Sirens’ displays a certain anxiety that comes from feeling the need to expose the bodied self, but not being able to go all the way. By contrast, ‘Love Charades’, does not play a precious game of hide-and-seek with social pieties in the matter of the female body, desire or sex. It is about itself; its figures do not trap themselves into performing, even as assigned adversaries, to the scripted expectations of society.

Sometimes, the eye wanders away from the theatricality of the performance and settles on the volumetric fact of abstract piles of bodies inflated to the maximum. One is led into a reverie around the body, as it ceases to be the vessel of an individual human subject, and becomes instead a symbol of humankind in extreme states of various kinds, whether abject or delirious.

About the ‘Conversations’ posted on her blogs, she says:

VS: The conversations that appear on the blog are part of a book I published in 2008. It is called Guftagu: gutarrrgoon. This book is a documentation of short-lived fleeting encounters with Lahori rickshaw-wallahs. This documentation prompted me to repeat the adventure with their counterparts in Bombay.

The rickshaw is the appropriate metaphor for mobility and nomadism: its open-close architecture strikes the right balance between public-ness and privacy. Rickshaws were my only mode of commuting, through Lahore, which gave rise to impromptu exchanges and led to further questions, silences and a renewal of inquisitiveness.

“Don’t call me from India,” said one rickshaw-wallah, “they’ll put me up on inquiry… In fact, you should just delete my number when you leave Pakistan.”

In Bombay, amidst stories about competing claims of belonging made by the ‘outsiders’ and ‘insiders’ to the city, bomb blasts and riots, emerges a story of exquisite greenness: a rickshaw-wallah takes his young bride from the village on a walk, through the city, in the rains. In a way, it is a research-based project but the intimacy of its ethnographic methodology creates a surplus of poetry, desire and sensorial residues.

About the book exhibited at Grey Noise Gallery, Lahore, she says:

VS: ‘Explosives’ enacts an overheated sexual fantasy; but its shock value is blunted through a repeated assault on the senses. In a sense, this book mimics the surfeit of libidinous images that flood the market and infiltrate people’s minds in the age of globalization. I am fascinated with anything that is naked.

SA: Having displayed in both Pakistan and India, what do you find different in the art scene of Lahore and Mumbai?

VS: Apart from being able to serve wine the only difference is that in Mumbai people see an exhibition till the last date of the exhibition. Lahore has some good gallery spaces but only one gallery with a vision and a bigger intent of making a mark and difference. Mumbai has many competing art galleries hence there is more dialogue here.