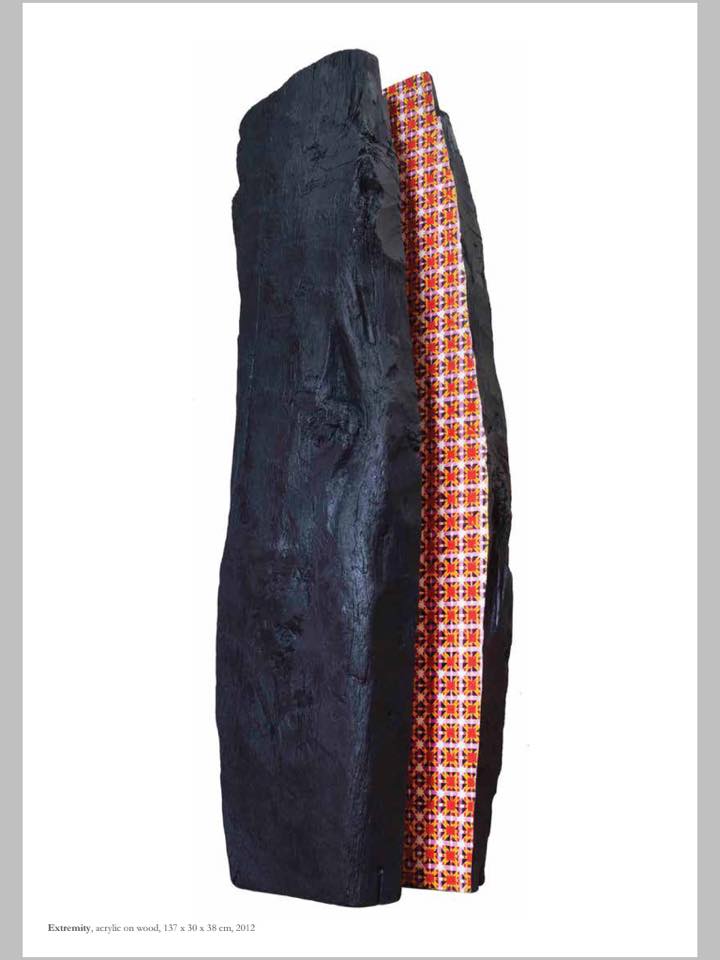 There is a sacred moment when a viewer first engages with an artwork, a fleeting second before realizing context or history, when the imagery in front

Mindforking: An Insight
A Moderator of the Spiritual
Art and Religion in the 21st Century

There is a sacred moment when a viewer first engages with an artwork, a fleeting second before realizing context or history, when the imagery in front is gluttonously devoured. It is then when the mind, drunk on representational visuals, begins to form preconceived notions about the nature of the artwork. These unsolicited moments of clarity may not spring to life as easily when absorbing artist Jamil Baloch’s latest body of work displayed at Sanat Gallery. Jewel bright colors poured into painstaking patterns, shapes and lines beckon hypnotically, dense with meaning that cannot be instantly comprehended.
Hailing from Nushki, Balochistan, the artist investigates the realm of identity and his sociopolitical reality through meticulous construction of form. It is understood that Baloch adopts colors and patterns from old rugs and Balochi embroidery in his paintings, delving into memories from his childhood town. These elements are recreated to present an alternative narrative.
In ‘Extremity’, palpable, dark wood is cut open to reveal intensely colored paintings. Almost tragically concealed within the dark form, the disparity between the external and intimate internal is indeed extreme. The artwork could perhaps be a metaphor for an unswerving, superficial exterior forever obscuring a fluid narrative within. Similarly, in ‘Self III’, the vivid paintings only emerge after the wood has been sliced open. Like nostalgic relics from another world, the sculptures add a strangely wistful element to the show.
The use of repetition and overwhelming notion of pattern maintain an overall ambiguous feel. The viewer is prodded to open his mind and consider a wider spectrum of possibility within the narrative, rather than depending on a composition of recognized images and consequently remaining stuck within their meanings.
One of the most baffling realizations may include how most of the artworks, exploring identity and the self, do so with a severe lack of living presence. The absence of immediate life prevents the viewer from gauging impressions of the artist’s potential thoughts and emotions. The focus thus shifts to the traditional aesthetics employed, allowing questions of context to arise.
There is a significant lack of boundaries within Baloch’s body of work. Firstly, instead of choosing a singular time period to focus his art around, the artist decides to navigate his history as he deems fit, choosing to confront contemporary dilemmas by exploring the traditional craftsmanship alive in his past. Secondly, Baloch’s visuals are not strictly bound to the surface they were painted on, the seamless patterns carrying on infinitely beyond the frame. The title ‘Beyond’, may symbolize these lack of boundaries, as both Baloch’s thought process and artworks indeed move beyond various restrictions and constraints, allowing the artist to follow his own direction.
Baloch studied Sculpture at the National College of Arts, graduating with distinction in 1997. He is currently working as a faculty member there. The multi disciplinary artist experiments with sculpture, painting, video and installations and is the recipient of several prestigious awards including the M.A Rangoonwala Award in 2005, Karachi.
Speaking through a language of lines, curves and grids, Baloch amalgamates traditional aesthetics with modern issues. Through his exploration of the concept of identity, the artist allows us a secret glimpse into his world.