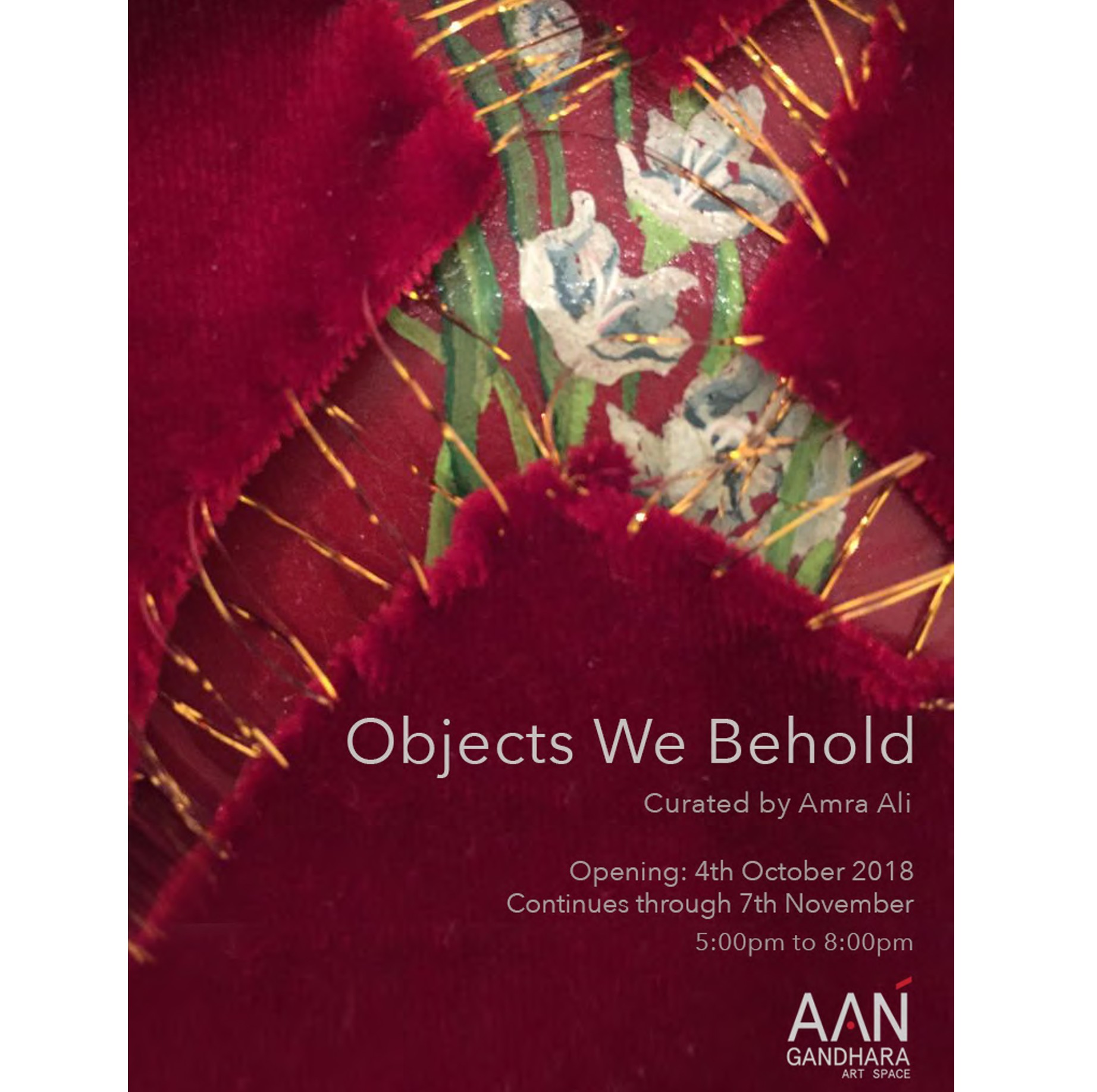 Pay attention to the light. Before trying to read or resolve this exhibition, notice the tone of the light: how the mell

West
FROM CALIFORNIA TO KARACHI
Shab-O-Roz

Pay attention to the light. Before trying to read or resolve this exhibition, notice the tone of the light: how the mellow darkness of the galleries makes the colours and textures of the works seem so saturated and resonant. Of how this darkness is gently enveloping.

In the former townhouse of Gandhara’s gallery space, this ominous quality of light literally brings the viewer into the fold of the exhibition’s premise. Curated by Amra Ali, the idea that initiated this show was that of the “body,” upon on which a cluster of artists were intuitively brought together to respond. Interestingly, there are hardly any bodies in this exhibition in the figurative sense, aside from the rococo shepherds and maids stitched into Marium Agha’s largescale tapestry ‘Tell the Wolves I am Home,’ (2018), and Affan Baghpatti’s gloriously naughty implied female figure in the work ‘the things you bring me too,’ (2018) made from a strategically placed soap dish beneath two copper pots, (with added nipples).

Instead the exhibition is made up of bodily objects: chairs, hot water bottles, surmedani pots, items of clothing, and even knives. Such objects evoke the things that we do to bodies, what we put on to them, and of what our bodies do to us. Also the things we do to other people’s.

In Adeela Suleman’s work, ‘Slow Slicing,’ for example, a large circular chandelier constructed from dozens of drooping swords considers the everyday violence of Suleman’s home city of Karachi as “death by thousand cuts,” a form execution known in China as lingchi and once practiced as a punishment for particularly severe crimes. Sharply lit, the work is both imposing and compelling, inviting us to test the sharpness of its blades. At the same time, the possible threat of this assemblage is deflated and flaccid, its explicitly phallic forms divested of power. But these limp weapons aren’t comic. The sense is that they’re wilted with exhaustion. All that violence has made them tired, and it’s impossible to find that in any way amusing.

Among such objects we feel our own bodies acutely. Shrouded in the exhibition’s ominous light, the viewer moves from space to space and experiences here an empathic pull, and there a subtle repulsion, or a fizz of discovery. In the case of New York-based Ruby Chishti’s largescale hanging sculpture, ‘An intangible sanctuary of ocean and stars’ (2018), one might feel all three together. Constructed from a gentleman’s woolen overcoat cut into pieces and reassembled with the help of thousands of folds of textile, (many given by Chishti’s friends or gathered from Brooklyn thrift shops), that jacket has become gigantic. It turns the viewer into a child and reminds us of how big adults used to feel when we were once so small.

With its greens, silvers, and browns, this giant of an overcoat is also a tree, wizened yet frothing with growth as if it had been left for centuries to grow quietly on its own. Buried within the folds of textile are curious objects such as green and downy birds, and tiny windows and doors. Hidden in its lower depths is a child’s tricycle exactly like the one Chishti had wanted as a child growing up and yet was never able to have.

While the work evokes a fairytale sense of wonder, a “sanctuary of ocean and stars,” it is also an effective embodiment of the concept of the “uncanny” in the Freudian sense. At its most basic, the “uncanny” means something both familiar and yet strange. In German, the equivalent word is “unheimlich,” derived from the word “heimlich” meaning private or hidden. In pioneer psychologist Sigmund Freud’s writings, the “uncanny” or the “unheimlich” is understood in terms of its smallest root term: “heim,” meaning home. The “uncanny” (or in German “unheimlich,”) thus describes experiences or objects that are familiar and homely, but also strange, secret, and unsettling.

The uncanny induces feelings of guilt, shame, fear, and also curiosity. This sense of the uncanny, or the “unhomely,” plays out in Chishti’s huge growth of a coat filled with doors, windows, and with peculiar objects. It also appears in Marium Agha’s tapestries presented in the exhibition, especially the aforementioned ‘Tell the Wolves I am Home,’ a parable of romance and lust, and the threats therein.

The work started with Agha purchasing from Karachi’s Sunday Bazaar decorative textile copies of 18th century Rococo paintings representing pastoral amorousness: shepherds, maids, and courtly lovers. Yet the work’s sumptuously coloured yarn threaded into thick and complex webs of imagery, very soon dissolves in front of one’s eyes as abstract meat-like forms emerge in the back and foreground. Against a blood-red sky, the top edge of the tapestry appears to have melted away from the frame. And finally, we notice that the heads of the male figures have been replaced by those of wolves. Their admirers are mere lambs.

Rot, decay, blood, and deception inhabit what seemed at first to have been an idyllic scene. The decorative and almost kitsch nature of textile is homely in the simplest sense of the term. But this luxury object’s beauty and decorativeness soon collapses into a kind of fear that—apropos the idea of the uncanny—also adds to the irresistible pull of this work.

The uncanny/unhomely also plays out, albeit with a witty twist, in Affan Baghpati’s sculptures on both floors of Gandhara’s gallery. The work ‘I try to call you but can’t find the telephone,’ (2018), an antique telephone chair made for sitting, is for example, filled with a fish-tank (complete with goldfish) and a patch of fake grass. The invitation to sit is corrupted by a peculiar fabrication of, in one section of the chair living things, and on the other a simulacrum of organic material.

In other works by Baghpati, these push-pulls between function and dysfunction, and life and lifelessness are more anthropomorphic. Take for example, his recrafted metal lotas and surmedani pots with added antlers, fins, and eyes. In contrast to what Baghpati calls our current “age of plastic,” these objects have already accumulated residues of tradition, production, and use before they arrive in his studio. Yet in their new augmented forms, these once inert objects seem mildly alarming, as if ready to turn against us. Used, discarded, resold, and re-used, they appear to laugh at us from their shelves and walls. They’ve lived in our homes, after all, and have learned generations of secrets. They make the homely unhomely.

Imaginative repurposing as a strategy also appears in Ontario-based Tazeen Qayyum’s ‘Our Bodies our Gardens,’ begun in 2011 and expanded for the Gandhara show this year. An assembly of decorated hot water bottles hung at womb-height from the ceiling of a ground floor gallery, the work began with a call for women (and later also men), to share their own hot water bottles with the artist, along with a piece of writing on an experience or feeling connected to their bottle. Qayyum received in turn stories of love, of broken families, bereavement, and of bodies gone awry. Applying her sensibility as a painter of repeated natural forms to the bottles received, Qayyum embellished these evocative objects with floral motifs symbolically connected to the narratives conveyed, in some cases also adding pieces of wire, gold leaf, and textile. The vine-covered rods from which the bottles hang, like an upside-down garden, are perfectly colour-matched to the original bottles, which appear mobile and animated thanks to this suspended display. On a shelf beside the installation the viewer can peruse sheets of paper each printed with an image of the decorated bottle and the giver’s story. I challenge even the toughest of souls to feel unmoved by these intimate disclosures.

Beside the gallery’s entrance another work by Qayyum, Thee Only do I Love, (2010 and 2018) instead riffs on the humour and power (and occasional lack thereof) of the masculine body, drawing a formal link to Suleman’s drooping sword arrangement on the first floor. The work is the result of Qayyum finding the form of textile ice therapy bags (meant for freezing and applying to bodily injuries), crudely funny. Oddly sexual and beautifully pathetic, fifteen of these bags are painted with an array of flowers and displayed upended on a spotlighted table. Fecund and flaccid, this assembly forms a metaphor for the co-presence of pleasure, pain, healing, and yes, absurdity, in the erotic body.

In the exhibition’s title – “Objects we Behold,” – we find again this imperceptible slide between love (for the beloved, the one we hold), pain, and indebtedness (to be beholden). To “behold” is also to look, or visualise, but its root is emphatically physical: to “hold.” The prefix “be” itself means to surround, cover, or affect, (among other variations). And this returns us once again to that sense of envelopment within the exhibition itself. First by the light and then by the works included. Each one provokes an empathic response. We can feel the warmth of Qayyum’s hot water bottles, the slice of Suleman’s knives, and that sense of diminishment beneath Chishti’s overcoat giant.

“Objects we Behold” is not the outcome of a curatorial “concept” or “essay” that bludgeons us with an overarching statement. There isn’t a unifying narrative here. Instead this exhibition provides a decidedly physical experience. It reminds us that whatever the skin we’re in, when we look… when we “behold”… our bodies behold with us, too.